Israeli President Isaac Herzog’s November 28 visit to the Tomb of the Patriarchs has highlighted a seemingly pro-settler approach to government policies in the already tense city. 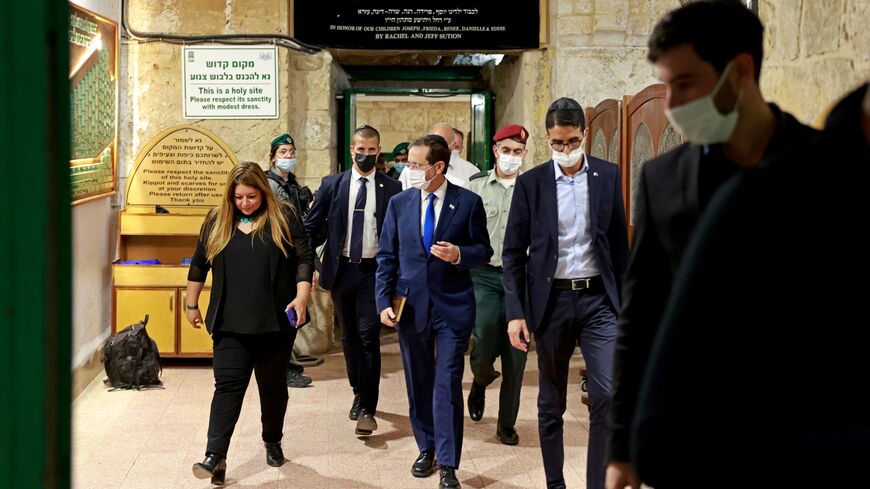 Israeli President Isaac Herzog (center) leaves the Tomb of the Patriarchs, a holy site for both Jews and Muslims (who refer to it as the Ibrahimi Mosque) after attending a Hanukkah ceremony in Hebron on Nov. 28, 2021. Hebron, the biggest city in the West Bank, is home to about 1,000 Jewish residents living under heavy Israeli military protection, among more than 200,000 Palestinians. - MENAHEM KAHANA/AFP via Getty Images

RAMALLAH, West Bank — Israel has made it clear that it has no intention of halting settlement projects in the West Bank and is actively strengthening and expanding them.

Antoine Shalhat, director of the Israeli Scene unit at the Palestinian Forum for Israeli Studies, told Al-Monitor, “The settlement activities in the West Bank reflect the current government’s support and intention of expanding settlements." Shalhat, whose unit covers Israeli developments that impact Palestinians, added that this inclination is further evidenced by the fact that Israeli Prime Minister Naftali Bennett and Interior Minister Ayelet Shaked are both part of the religious Zionism faction, who believe that the Holy Land was promised to the Israelites by God, and thus modern Jews are entitled to settle it.

Shaked previously served as justice minister and signed in 2017 an order — along with IDF General Roni Noma —  to establish a municipal services directorate for settlers in Hebron. She recently reiterated her intention to make the decision permanent, which will turn the directorate into a de facto municipality providing full services and receiving a budget from the Interior Ministry.

Karim Jubran, director of field research at the Jerusalem-based nonprofit organization B'Tselem, told Al-Monitor, “Hebron is a glaring example of the Israeli apartheid system. Shaked’s decision means that Hebron has become part of Israel and is a confirmation of the undeclared Israeli annexation policy of the occupied Palestinian lands."

The fewer than 1,000 settlers in Hebron receive large sums of money in support, Jubran said, and "Settlers are tightening the noose around the lives of half a million Palestinians in Hebron, especially those who live in the H2 area, as hostages of settlers and the Israeli army.”

In November, B'Tselem reported that settler violence is systematic and ongoing and effectively Israel’s official policy to take over vast areas of Palestinian lands, including agricultural land and pastures.

Settlement in Hebron is supported at the highest Israeli political levels. On Nov. 28, Israeli President Isaac Herzog visited the Ibrahimi Mosque, accompanied by settlers and Knesset members to celebrate Hanukkah, while Israeli forces closed the gates of the mosque and prevented the Palestinians who gathered to protest from entering.

The Israeli forces also forced local shop owners to close up, angering youth and leading to clashes in several areas in Hebron.

Herzog’s visit came just after the Nov. 25 announcement that 372 new housing units had been approved in the settlement of Kiryat Arba in Hebron, along with public buildings, educational institutions, commercial buildings and public park areas.

Army Radio reported that during the past two years, the Kiryat Arba Council has approved the construction of more than 1,000 housing units, in addition to commercial areas and a university campus.

Palestinian figures have warned that the ongoing settlement projects and Israeli policy in Hebron would cause the situation in the city to explode.

Hebron Mayor Taysir Abu Sneineh told Al-Monitor that the city has been recently subjected to "fierce attacks," which culminated with Herzog’s visit to the Ibrahimi mosque — an action he characterized as "storming." He added that Israel has been targeting Hebron with false allegations, while settlements have been expanding in Kiryat Arba, replaying the same scenario as in Tel Aviv, which was built and expanded at the expense of the city of Jaffa.

Abu Sneineh added that Israel is trying to replace the Hebron Municipality with a settler organization. “This is not to mention the daily attacks [by settlers] in the Tel Rumeida neighborhood and al-Shuhada Street,” he added. “The city is sitting on a volcano, and things might explode at any moment.”

Deputy Governor of Hebron Khaled Dudin said that Israel is seeking to legitimize the settlement entity in Hebron, but “this will fail," he predicted, given Palestinians' efforts to mobilize "to defend the Old City and the Ibrahimi Mosque.” He added that Palestinian residents in the Old City have grown from 3,000 to 8,000 since 2016.