An Israeli project to install an electric elevator in the Ibrahimi Mosque in the city of Hebron could lead to increased settler control of surrounding area. 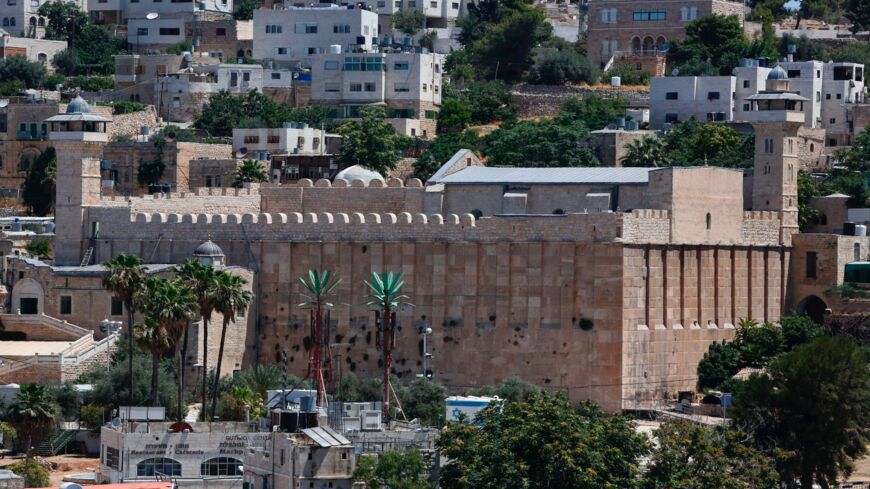 A picture taken on June 29, 2017, shows a view of the Cave of the Patriarchs, also known as the Ibrahimi Mosque, which is a holy shrine for Jews and Muslims, in the heart of the divided city of Hebron in the southern West Bank. - HAZEM BADER/AFP via Getty Images

RAMALLAH, West Bank — Israeli Defense Minister Benny Gantz approved on June 10 the implementation of a project to install an electric elevator and build a road to facilitate access for settlers with special needs to the Ibrahimi Mosque (the Cave of the Patriarchs) in Hebron in the southern West Bank. The project entails seizing the lands surrounding the mosque.

According to the Israeli newspaper Israel Hayom, Gantz instructed the Israeli coordinator of government activities in the occupied territories to issue a building permit for the project and conclude a contract with a contractor to start work and complete the relevant procedures.

Gantz’s decision came after the Israeli Supreme Court dismissed April 21 a petition by the Hebron municipality to freeze the decision to license and build the electric elevator inside the Ibrahimi Mosque. The court gave the green light to the Israeli Civil Administration's Higher Planning Council to move forward with the project, and the license was approved by the Israeli Central Court.

On May 3, 2020, then-Defense Minister and current Prime Minister Naftali Bennett had approved an expropriation order to seize some areas adjacent to the Ibrahimi Mosque in Hebron to install the electric elevator.

According to the Palestinians, the new project will strengthen Israeli control over the Ibrahimi Mosque, which is believed to have been built on the tomb of the Prophet Ibrahim. They believe the Israeli project will alter the architectural and historical features of the site.

The decision to go ahead with the project appears to violate the Hebron Protocol, signed by the Palestinian Authority (PA) and Israel in 1997, which conferred the planning authority in the city to the PA.

The Hebron Protocol was signed three years after a settler committed a shooting massacre at the Ibrahimi Mosque site in 1994. The protocol provides for the division of Hebron into two parts: Area H1, controlled by the PA, and Area H2 where the Ibrahimi Mosque is located and which is subject to Israeli security control. The protocol provided that the authority to grant building permits across Hebron in the two areas is the prerogative of the Hebron municipality.

Israel has exploited the 1994 massacre, during which settler Baruch Goldstein killed 29 Palestinians, to completely divide the ancient sanctuary as it gave exclusive access to 66% of its area to Israeli settlers and Jewish visitors. Israel also erected military barriers at the entrances to the sanctuary and took control of all of its gates and external courtyards.

Hebron Mayor Taysir Abu Sneina told Al-Monitor, “Israel’s ambitions for the Ibrahimi Mosque began from the first day of the occupation of Hebron. Since then, it has continued its Judaization projects at the mosque, which is of great value and importance to the Palestinians. Israel is now trying to change the landmarks of the Ibrahimi Mosque under a humanitarian pretext, which is the construction of an elevator and a road for disabled settlers.”

He said the approval of this project undermines the prerogatives of the Hebron municipality, as it is the only authority that has the power to grant a license to any facility or building in the city under the Hebron Protocol concluded between the PA and Israel. “The municipality submitted numerous objections to the Israeli courts against the project. They were all rejected,” he noted.

As part of Israel’s Judaization operations, Israeli settlers, accompanied by the Israeli army, bulldozed on June 7 a 400-square-meter Palestinian historical neighborhood, locally known as Hosh Qafisha and Sharif, near the Ibrahimi Mosque.

Director of the Ibrahimi Mosque Sheikh Hafthi Abu Sneineh told Al-Monitor, “The Israeli attacks on the Ibrahimi Mosque are ongoing. Most recently, Israel approved the installation of an elevator and a bridge at the entrance to the mosque. This is in addition to the daily attacks, such as preventing the call to prayer and preventing the technical staff from fixing the defect in the wires of loudspeakers on the roof of the mosque.”

He argued that the new project aims to extend influence and control over the facilities of the Ibrahimi Mosque and its courtyards. “Israel recently blackmailed the Islamic religious endowments. It allowed Palestinians to repair the defects in the speaker wires in exchange for controlling the Yusufiya hall inside the Ibrahimi Mosque, which houses the shrine of the Prophet Yusuf,” he added.

The new project has provoked Palestinians and could ignite the situation on the ground in Hebron, where popular movements against the project have already started. Political forces and national activists in the Hebron governorate issued a call on June 16 to confront Israel's attacks and protect the Ibrahimi Mosque and the Old City.

In a statement, they called for a daily presence inside the Ibrahimi Mosque and permanent extensive and intensive visits to it at all times. They also called for the continuation of various popular activities against Israel and settlers, and for staging protests in various locations, especially at the entrances to the settlements in the Hebron governorate and in the vicinity of the settlement outposts in the heart of Hebron city.

Hisham al​-Sharbati, coordinator of the Hebron Defense Committee, stressed the need to preserve the identity and structure of the Ibrahimi Mosque, which was classified as part of the world heritage. “The new Israeli project will make changes to the structure and architectural form of this ancient site, thus strengthening control of the settlers over it,” he told Al-Monitor.

He said the new project will lead to an increase of settler raids. “The project will allow for more celebrations and social and religious events held by settlers in its courtyards controlled by Israel. Meanwhile, Palestinians who want to reach the Ibrahimi Mosque have to cross at least two military checkpoints,” he said.

Sharbati concluded, “About 1,000 settlers live in the Old City of Hebron, in addition to hundreds who live in homes and buildings that they took over around the Old City, against around 6,000 Palestinians.”