A controversial proposal for a new settlement in the heart of Hebron calls for bulldozing a long-barricaded Palestinian vegetable market to build new shops and housing for Israelis. 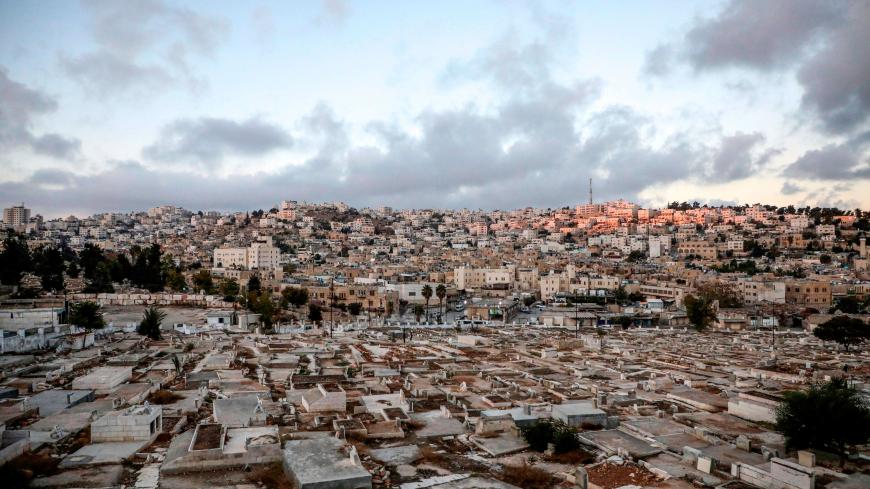 A view of Hebron's Palestinian cemetery (foreground), and beyond it the old market building (C) along al-Shuhada street that was newly announced by the Israeli defense minister to be designated as a new Israeli settlement, Hebron, West Bank, Dec. 1, 2019. - HAZEM BADER/AFP via Getty Images

Palestinians in the southern West Bank staged a general strike Dec. 9 to protest Israeli authorities’ intention to build a settlement neighborhood in the old market of Hebron.

The settlement is to replace the huge wholesale vegetable market that the Israeli military closed in 1994 after the Ibrahimi Mosque massacre when settler Baruch Goldstein stormed the mosque and shot dead 29 Palestinians and wounded 150. Israel has enforced the closure for 25 years, preventing merchants from returning.

Israeli Defense Minister Naftali Bennett approved the new settlement project on Shuhada Road at the center of the city. The Israeli Civil Administration in the West Bank on Dec. 1 informed the Hebron municipality of authorities’ plan to raze the market and build new shops and other facilities for settlers. According to Israeli newspaper Haaretz, the plan includes 70 new apartments. City officials were given one month to respond to the notice.

The settlement would create a territorial continuation from the Ibrahimi Mosque in the Old City of Hebron to the nearby Abraham Avinu neighborhood. It would, by some estimates, double the number of settlers residing in the Old City. These currently amount to 800.

Sufyan al-Junaidi of Hebron was one of the dozens of merchants who rented shops in the market before it was closed.

“The army closed my vegetable shop by a military decision, and since then I have not been able to visit it, not even once,” Junaidi told Al-Monitor.

Junaidi explained that his father began renting the shop from the Hebron municipality in 1965. The market, he said, was once full of shoppers and visitors. “[Tons] of fruits and vegetables would flow into this important commercial area, but we have been denied access to it for decades,” he added.

Hebron Mayor Tayseer Abu Sneineh told Al-Monitor, “The notice we received indicates the intention of the occupation authorities to bulldoze the Hasbahe central vegetable market and establish a settlement complex in its place. The occupation authorities said they would take into account the financial rights of the Palestinians but did not clarify the mechanism they will adopt in this regard.”

Abu Sneineh said Israel’s pledge to preserve the financial rights of Palestinians who have been denied access to their stores for the past 25 years is a “bad joke” and a lie. Israel has been planning to establish a settlement in the heart of Hebron since it occupied the city in 1967, he said. He noted that the market extends over an area of ​​about 5 dunums (1.2 acres) and had 40 shops in several buildings.

He stressed that a new settlement will lead to more tension and settler attacks on residents of the area and will be the last nail in the coffin of the Hebron protocol.

In January 1997, the PLO signed a protocol with Israel to redeploy Israeli forces in the city. Under the pact, the city is divided into two areas — H1, which accounts for 80% of the Hebron area and is subject to the control of the Palestinian Authority (PA), and H2, which accounts for 20% of the area and falls under Israeli security control.

The protocol stipulates the wholesale market was to be opened as a retail market and traffic was to be restored on Shuhada Road. However, these directives were never implemented.

According to Abu Sneineh, the municipality plans to petition the Israeli judiciary to stop the development, despite a lack of confidence in the outcome. “We have no other choice,” he added. As soon as the municipality received the notice, it began forming a legal committee to build a case in cooperation with several local institutions such as the province, the Hebron Rehabilitation Committee and the Palestinian Authority Committee Against the Wall and Settlements. The committee will file a lawsuit if necessary.

Samer Shehadeh, the city's legal adviser, said Bennett’s decision is not based on legal grounds but on political ones, and the committee will take legal action after the end of the one-month response period the municipality was granted beginning Dec. 2.

Hisham al-Sharbati, coordinator of the Hebron Defense Committee, told Al-Monitor the stores in the vegetable market should have been reopened as per the Hebron protocol. Failure to abide by the protocol indicates Israel's prior intention to Judaize and use the market for settlement projects.

Israel's eventual goal, he said, is to convert parts of the heart of Hebron into a Jewish city that it will annex. He charged that Israel is taking advantage of Washington's complicity, especially now that the United States has said it no longer considers Jewish settlements illegal in the West Bank. He believes the construction will have serious repercussions, as tensions grow, raising the possibility of almost daily confrontations in the city.

Hussein al-Sheikh, a member of the Fatah Central Committee, took to Twitter on Dec. 4 to say that “implementing the decision … portends an explosion and a shift to a confrontation of another kind. Such a colonial shift would require an official and popular Palestinian response. This comes amid plans to annex the Jordan Valley in the occupied West Bank.”

For their part, Hebron institutions also condemned the Israeli plan, considering it a provocation that will increase settlement violence and endanger Palestinian residents.