Israel has begun implementing a Judaization project at the Ibrahimi Mosque in Hebron to install an external elevator, open a route for pedestrians and a parking lot, amid Palestinians' protests that are likely to escalate in the coming weeks. 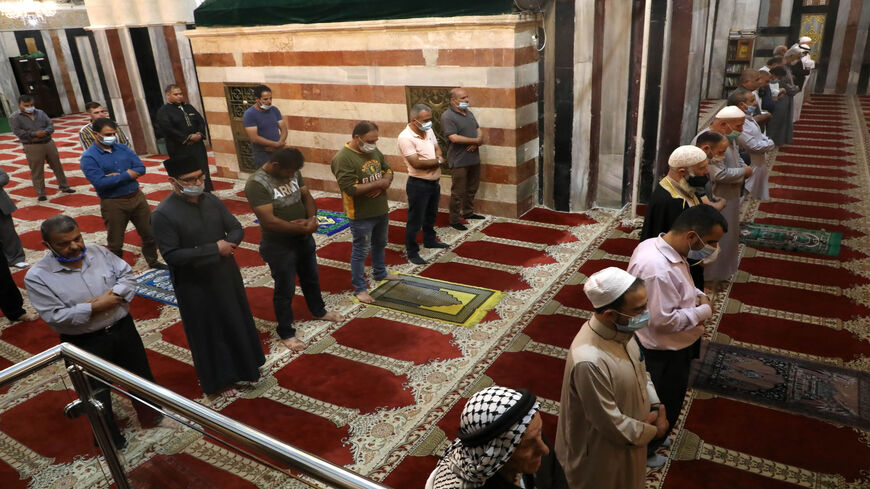 Palestinians wear face masks as they gather to perform the Friday prayers at the Ibrahimi mosque, also known as the Tomb of the Patriarchs, Hebron, West Bank, June 26, 2020. - Hazem Bader/AFP via Getty Images

RAMALLAH, West Bank — Nearly 20,000 Palestinians from Hebron governorate, in the southern West Bank, performed Friday prayers at the Ibrahimi Mosque (Cave of the Patriarchs) on Aug. 13, to stress the Islamic identity of the site, in the face of the Israeli Judaization efforts made in its outer courtyards.

On Aug. 12, the Directorate of Religious Endowments in Hebron decided to close all the mosques in the city calling on worshippers to pray at the Ibrahimi Mosque, which is believed to have been constructed on the tomb of the Prophet Ibrahim (Abraham), in a bid to defend it and protect it from Israeli plans. Thousands of Palestinians responded to the call, amid tight Israeli security measures.

The Israeli forces, which were deployed in the vicinity of the site and the old city, prevented hundreds of young men from entering the site, and fired tear gas at worshippers, after driving them out of its courtyards.

On Aug. 10, the Israeli authorities began excavation works in the southern outer courtyards of the site under strict security measures, as part of the project that would alter the features of the Ibrahimi Mosque.

This project sparked protests in Hebron. Palestinians rallied Aug. 11 in front of the Ibrahimi Mosque, amid the Israeli forces’ measures to suppress them, including the firing of tear gas. The protests are expected to escalate in the coming months as the project continues to be implemented.

The Israeli project involves the installation of an elevator and a road to facilitate access for settlers. The works are carried out by a team from the Israeli Defense Ministry, under the supervision of the Israeli Civil Administration. The project is expected to be completed in six months.

On May 3, 2020, then-Defense Minister and current Prime Minister Naftali Bennett had approved an expropriation order to seize some areas adjacent to the Ibrahimi Mosque in Hebron to install the elevator.

Gantz’s decision came after the Israeli Supreme Court dismissed April 21 a petition by the Hebron municipality to freeze the decision to license and build an elevator inside the Ibrahimi Mosque. The court gave the green light to the Israeli Civil Administration's Higher Planning Council to move forward with the project, and the license was approved by the Israeli Central Court.

Palestinians believe this project is a new Israeli attempt to turn the Ibrahimi Mosque into a synagogue, as it paves the way for a greater number of settlers to enter the site, the seizure of additional parts in its vicinity and greater Israeli control over it, which would alter its characteristics and obliterate its identity.

Director of the Ibrahimi Mosque Sheikh Hafthi Abu Sneineh told Al-Monitor that Friday prayers were held at the Ibrahimi Mosque to express rejection of its Judaization and strengthen the presence of Palestinians there, so as to shed light on its Islamic and Arab identity.

He said that the project is additional proof of the Israeli intention to continue to Judaize the remaining parts of the site, and to fully tighten control over it and its surroundings. He explained that the project poses a challenge to the international community, especially UNESCO, as the city of Hebron and the Ibrahimi Mosque were added to the World Heritage List in 2007.

He noted that the project will consume the surrounding lands that belong to the Islamic religious endowments, and will alter the site’s historical image and forge its identity.

Israel has exploited the 1994 massacre, during which settler Baruch Goldstein killed 29 Palestinians, to completely divide the ancient sanctuary and give exclusive access to 66% of its area to Israeli settlers and Jewish visitors. Israel also erected military barriers at the entrances to the sanctuary and took control of all of its gates and external courtyards.

The decision to go ahead with the project appears to violate the Hebron Protocol, signed by the Palestinian Authority (PA) and Israel in 1997, which conferred the planning authority in the city to the PA. The protocol provides for the division of Hebron into two parts: Area H1, controlled by the PA, and Area H2 where the Ibrahimi Mosque is located and that is subject to Israeli security control. The protocol provided that the authority to grant building permits across Hebron in the two areas is the prerogative of the Hebron municipality.

The director-general of the Hebron Endowments, Jamal Abu Aram, told Al-Monitor that the Israeli project seeks to obliterate the features and Judaize the Ibrahimi Mosque by facilitating access for setters while tightening access measures for Palestinians to the site and the old city.

He said that the project stretches from the eastern courtyard that is under Israeli control, and that the bulldozing has been ongoing and has affected 360 square meters (3,875 square feet) so far. He added that additional parts of the outer courtyards will be exploited.

Abu Aram stressed that the Friday prayers that w held at the Ibrahimi Mosque is tantamount to a call for a general mobilization for the sake of the mosque and an important message recalling the popular movement that took place in Jerusalem against installing the electronic gates at the entrances to Al-Aqsa Mosque, which proved that a strong popular uprising is effective in deterring the occupation and preventing its project.

He pointed at the Israeli judiciary’s complicity with the authorities’ plans. “We, as local authorities, [the Islamic Endowments and the Hebron municipality] resorted to the Israeli courts, which procrastinated their decisions. They froze the project for some time, before the Israeli Supreme Court gave its final approval months ago.”

The situation in Hebron is expected to escalate in the coming days and weeks amid a continuation of the Israeli project. Popular protests and calls to go to the Ibrahimi Mosque are anticipated. Abu Sneineh said, “Activities in protest against the occupation’s schemes will continue and we will not allow any violation at the site. We must work to thwart the scheme.”