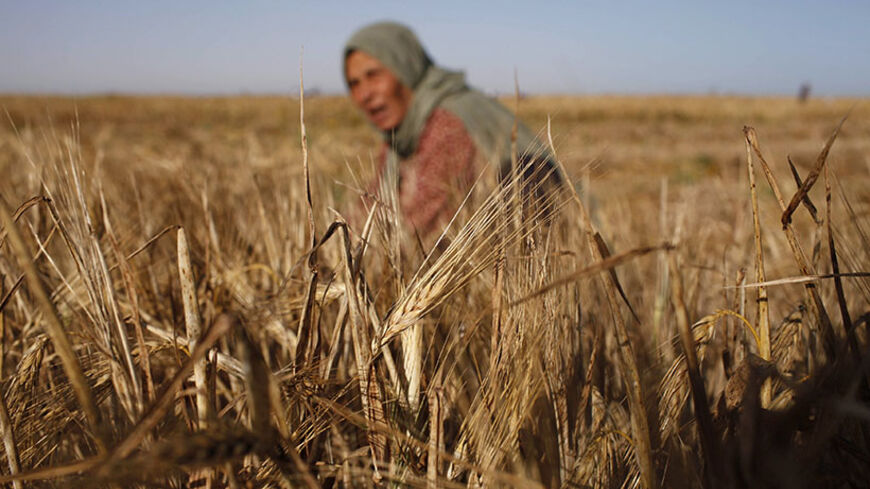 A Palestinian woman harvests barley on a farm near the border of the southern Gaza Strip with Israel, April 28, 2014. - REUTERS/Ibraheem Abu Mustafa

GAZA CITY, Gaza Strip — Israel is still bombing agricultural lands as part of its operations in different regions in the Gaza Strip. These regions have become a main target for the Israeli army since the start of Operation Protective Edge on July 8. This proves that the systematic Israeli air raids against them have an underlying security target.

The night shelling had gone on for days before the start of Operation Protective Edge, and Israel had targeted the agricultural lands in the different areas of the Gaza Strip. After the start of the operation — which was first restricted to air raids, then included the use of warships — the intensity and magnitude of shelling against agricultural and arid lands increased in the south, north, southwest, east and center of the Gaza Strip.

In the beginning, the shelling focused on the agricultural regions that were formerly Israeli settlement lands and were evacuated in compliance with the Israeli disengagement from Gaza in 2005.

Farmer Maher Abu Hdayda told Al-Monitor what happened on his land in the Ein Jalut agricultural region, southwest of Khan Yunis city, after it was subjected to airstrikes by Israelis last week before the announcement of the current military operation. “You know what a tsunami is? This was a tsunami of fire burning my agricultural land and destroying it completely,” he said.

Abu Hdayda said the shelling targeted the agricultural lands with crops, trees and greenhouses in Ein Jalut, on the road between Khan Yonis and Rafah.

I coordinated with the farmers to visit the two areas in the liberated agricultural regions in the center and south of Gaza Strip, but then received phone calls indicating that the areas were evacuated one hour after work began on the first morning of the start of the military operation.

One of the workers in Hattin, a few meters away from a military location affiliated with Islamic Jihad in a liberated agricultural region in the center of the Gaza Strip, confirmed that the agricultural lands covered with trees and crop fields were direct targets.

Mahmoud al-Ajrami, an expert in strategic affairs, told Al-Monitor, “Israel has been panicking due to the weapon of tunnels and rockets since the onset of the 2006 Gaza cross-border raid. During that operation, the Izz ad-Din al-Qassam Brigades abducted a soldier, who was released within the scope of a prisoner exchange deal. (The abduction operation) succeeded mainly because of the ‘weapon’ of tunnels.”

“The hysteria escalated after the discovery of the Ein Hashlosha tunnel, east of Khan Yonis, last October. Israel is deliberately shelling the agricultural lands because it is well aware that the tunnels still exist in many places,” Ajrami said. “The 5-10 meter (5 to 11 yards) deep hole resulting from the shelling of the agricultural lands with heavy missiles confirms that Israel is targeting what is under the ground, not above it.”

Another farmer told Al-Monitor, on condition of anonymity, “Israel targeted the warehouses used to store the crops yet to be sold, as well as agricultural tools and drugs in the liberated agricultural region, thinking that these warehouses contain al-Qassam Brigades weapons.”

Meanwhile, Abu Hdayda said, “Each row of greenhouses has a small storage building that was rented [by farmers] from the government after the Israeli withdrawal from [this region].”

Mohammad al-Shaer, who was general director of the general administration of the liberated agricultural regions in the Hamas government that preceded the current consensus government, told Al-Monitor, “The agricultural lands were directly and deliberately targeted in the past few days. Apache helicopters and surveillance aircraft, as well as naval warships, were used. At the beginning of Ramadan, some lands were shelled with 30 direct missiles.”

“The Ministry of Agriculture is afraid that the targeting of agricultural lands will persist, given the financial deficit of the government. Land reclamation requires huge sums of money. The shelling destroyed the infrastructure, including lands, irrigation and power networks and warehouses,” he said.

A statement issued by the Palestinian Ministry of Agriculture on July 3 reported that the losses of the liberated agricultural region in Khan Yunis exceeded $2.5 million due to the shelling that happened before the start of Operation Protective Edge.

Shaer warned against the dangers of persistent targeting of agricultural lands. “Israel is aiming to fight Palestinian farmers and to keep the Gaza Strip under siege and in need. It wants to destroy what is left of the outstanding agricultural economy,” he said.

Ajarmi said, “These regions also provide food supplies for Gaza. The main aim is to destroy the tunnels. But Israel is killing two birds with one stone by affecting the agricultural sector, too.”

The liberated regions are highly distinguished from the remaining agricultural lands in Gaza Strip.

“They are the only wide and linked agricultural stretches that span more than 100 and 400 dunams [25-100 acres]. They provide the best irrigation water compared with the other lands in the Strip, and they constitute the best place for greenhouse agriculture,” Shaer said.

The general administration of the liberated agricultural regions was established a year after the evacuation of around 19 settlements and an Israeli settlement compound. Its influence was spread from the north of the Gaza Strip to its south in 2005. Its mission consisted of protecting the available assets in the eight agricultural regions, providing infrastructure and coordinating with the Ministry of Interior regarding the regions' management.

Shaer said the general administration granted annual rent contracts to eight agricultural associations and two private companies to invest in an atmosphere of fair competition in these regions.

There are about 10 agricultural land tracts in the liberated agricultural regions, and most of their names have been changed from Hebrew. They include Dhat al-Sawari, which joins the former settlements Rafih Yam and Beit Sidi; Ein Jalut, on the ruins of the Atsamuna and Badoulah settlements; Hamra al-Assad (Ganor); Jadid; Nafit Kalim; Tal al-Jinan 1 (Jital); Tal al-Jinan 2; Hattin; Kfardaroum and Tiba.

A team from the Ministry of Agriculture and Environmental Authority was formed to survey the regions subjected to shelling in order to access the harm inflicted upon the soil.

Israel has been increasingly targeting agricultural lands to reach the goal of its military operation to deter Palestinian rockets, thus inflicting more burden on the government under siege. Nevertheless, this did not affect the Palestinian factions’ ability to launch rockets. The armed factions are still cautious, nevertheless, in dealing with the aggression. They haven’t used their strategic stock, which Israel failed to eradicate during Operation Cast Lead in 2008 and Operation Pillar of Defense in 2012.