Agricultural lands along the eastern Gaza border are being sprayed with pesticides by Israeli gliders, resulting in the destruction of cultivated crops on Palestinian lands. 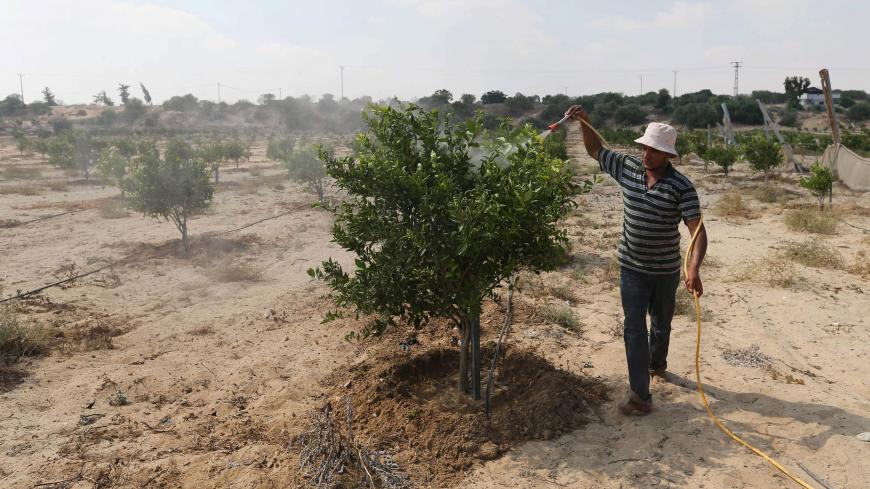 A Palestinian farmer sprays farm chemicals on a tree in a field at the former Jewish settlement of Neve Dekalim, in Khan Yunis, southern Gaza Strip, Aug. 6, 2015. - REUTERS/Ibraheem Abu Mustafa

GAZA CITY, Gaza Strip — Ali Abu Said woke up March 7 to irrigate his crops in the village of Juhor ad-Dik, south of Gaza City, like he does every morning. But this time he saw Israeli gliders spraying unknown pesticides on lands along Gaza’s eastern borders.

“I saw the soldiers setting tires on fire to determine the direction of the wind. Then the Israeli gliders began spraying unknown pesticides at an altitude of 400 meters [0.25 miles] on the Israeli side of the border. The [pesticides] reached the Palestinian agricultural lands at a distance of 1 kilometer [0.6 miles] from the separation fence. By the end of the day, crops such as spinach and peas on my land and the adjacent lands died. In the following days the zucchinis and berries turned yellow,” he told Al-Monitor.

Abu Said’s land is 300 meters (328 yards) from the Gaza-Israel border and extends along 20 acres. He shares the land with his siblings, and he owns about 7 dunams (1.7 acres) that he cannot use because it is 100 meters (109 yards) from the border fence. Every time he tries to plant crops there, he is shot at.

In January, after the Israeli soldiers sprayed pesticides, the Palestinian farmers turned over the soil to try to prevent the pesticides from having an impact.

Some farmers were surprised with the early spraying in March, as crops were exposed. Abu Said noted, “My neighbor lifted the cover off the zucchinis to let them breathe. After the Israelis sprayed the pesticides, he sprayed water to neutralize the effect and barely saved the crops from dying.”

Statistics covering the period December 2017 until mid-March by the Palestinian Ministry of Agriculture, in coordination with the International Committee of the Red Cross (ICRC) and the food security cluster, show that around 544 acres in eastern Gaza were affected due to the Israeli authorities’ spraying on the Palestinian side — 250 acres in Khan Yunis alone. The surface area of pastures that were affected reached 2,570 acres.

The Palestinian Ministry of Agriculture in Gaza City has accused the Israeli authorities of launching a "chemical war" on the agricultural sector in the border areas of the Gaza Strip. Wael Thabet, the general director of the Plants Protection and Quarantine Directorate at the Ministry of Agriculture in Gaza, said, “We consider this a chemical war because it targets [farmers] through spraying pesticides [that reach] agricultural border areas that represent a food basket for Gaza, making up 35% of the agricultural land area in the enclave.”

He told Al-Monitor, “Not all components of the pesticides that were sprayed have been identified, but the results of the lab analysis of sprayed plants showed traces of Oxygal that deters seasonal germination and burns the green part of plants. Most crops in these areas are cucurbitales and leaf vegetables such as spinach, spinach beets, barley, parsley, peas, fodder, zucchinis and others.”

The ICRC in Gaza considers spraying pesticides on agricultural lands “worrying.” Suheir Zakout, the spokeswoman for the ICRC in Gaza City, told Al-Monitor, “The ICRC has been following up on the spraying near the border for three years, and it worries us. We call on the Israeli authorities to [stop aerial spraying of pesticides] because this has long-term negative effects on the environment and the people.”

In a statement to Al-Monitor, Zakout said that the ICRC is coordinating with the local authorities and the Ministry of Agriculture by documenting the spraying operations and the results of lab tests performed on the pesticides and using them in undisclosed bilateral talks with Israel.

“The lands of some of the farmers benefiting from the rehabilitation have been affected by the pesticides that were sprayed recently by Israel. We tried to focus on rehabilitating the lands by planting rainfed crops such as barley and corn that need little care and presence from farmers in the fields that have become dangerous areas," she added.

He said, “Israel wants the farmers to leave the border area to create an isolated zone that stretches along the Gaza Strip, so that resistance fighters cannot enter while farmers are at work.”

Habib noted that the gliders are using the direction of the wind because they cannot spray over the Palestinian agricultural lands directly since they could be targeted. He said, “The gliders that are being used to spray the border areas are flying at low altitude. They are not military jets and cannot respond or defend themselves."

The border areas are confrontation zones between the Israeli army and the Palestinian resistance factions in the Gaza Strip; several tunnels have been targeted in separate military operations by the Israeli army.

Human rights centers in Gaza are closely watching the pesticide spraying in the border areas. Al Mezan Center for Human Rights considers the spraying operations as one of Israel’s many violations of international humanitarian law and human rights law. The center detailed in a fact sheet it released following the Israeli spraying operations in June 2017 the impact of these Israeli actions and warned against “their repercussions on agriculture, food security and living conditions of farmers.”