Smuggling of banned pesticides a problem in Gaza

Misuse of pesticides in Gaza’s agricultural industry poses a dangerous risk to farmers and consumers of Gazan produce. 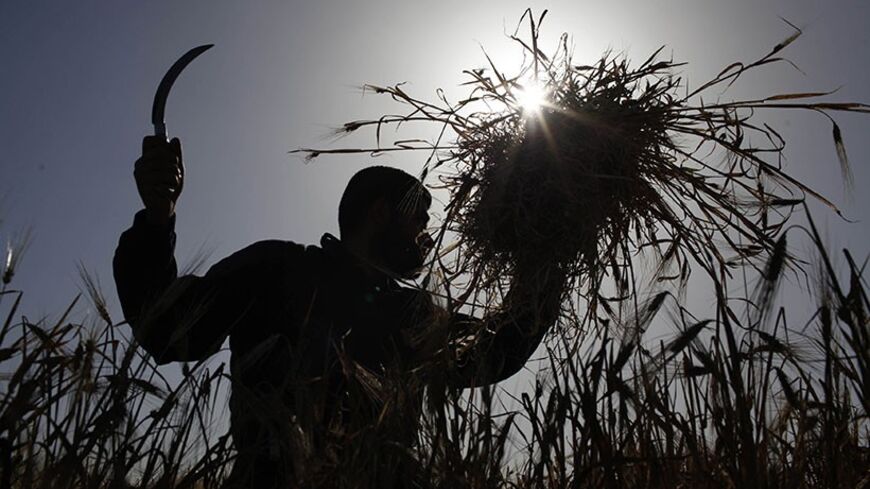 KHAN YUNIS, Gaza Strip — Nemacur is one of the agricultural pesticides that the Ministry of Agriculture in the Gaza Strip warns against on its website. On April 19, I headed to visit the companies that import and sell agricultural pesticides in Gaza City, and in less than two minutes was able to buy Nemacur without a permit from the ministry. Another store did refuse to sell it without a permit.

The pesticide shops are located next to one another in the old market in the Gaza Strip. Ibrahim Haboush, the owner of one of the shops, told Al-Monitor, “The Ministry of Agriculture periodically controls the goods in the shops, but it does not cater to the farmers’ needs.”

The pesticide Temik is one of the dangerous and banned pesticides on the ministry’s website, according to a trader who sells his goods in the shops. “We have managed to smuggle a shipment of 50 barrels of the US-made pesticide Temik from Egypt,” he told Al-Monitor on condition of anonymity, noting that the price per kilo is about $75.

A 2010 report by Al Mezan Center for Human Rights confirmed that these pesticides and fertilizers cause food contamination in Gaza, especially when used without taking into account the advice of agricultural engineers. The report also read that these pesticides cause diseases such as blood cancer, breast cancer and prostate and congenital malformations.

Suhail Khudeir, one of the biggest importers of agricultural pesticides, told Al-Monitor that the ministry has warned all shops against the use and sale of Nemacur and Temik, among other pesticides that require permits for use.

“In the Gaza Strip, there are over 40,000 acres that are used for the cultivation of various crops in the summer and winter seasons, which is equivalent to 80,000 acres annually. These lands necessitate 160,000 liters of Nemacur,” he added.

Al-Monitor also visited the agricultural lands in the al-Mawasi area in Khan Yunis and met with Mohammed al-Fara, the owner of a 150-acre plot planted with potatoes and watermelons.

“Agricultural pests have increased dramatically on the land because of heavy agriculture, which makes us spray them with pesticides at all times and clean the land with bromide gas,” he said.

Fara displayed some the pesticides he uses, including Nemacur and a cylinder of bromide gas that he bought for $1,450. This gas is banned internationally because of its impact on groundwater and human health, according to reports by specialists.

“The gas has yet to be banned in the Gaza Strip. Once it is, I will return to thermal remediation of the soil,” he added.

Mohammed al-Zak, director of the Cooperative Association for the Development of Agricultural Resources in Khan Yunis, told Al-Monitor, “There is no problem with using any pesticide as long as farmers do not harvest fruits before the end of the waiting period.”

He added that crops such as strawberries have been destroyed multiple times after being exported to Europe, following toxicity testing of the chemical residue after early harvesting.

According to Fara, Nemacur’s waiting period is up to 60 days during the summer and 90 days during winter, which means that crops should be harvested at least 60 and 90 days, respectively, after the pesticides are applied. Temik needs six months to dissipate before fruits can be harvested.

Fara added, “Due to the tunnel trade, many banned pesticides have been introduced to Gaza, while the prices of many other pesticides were reduced.” He also said after the closure of tunnels, he has become indebted to the pesticide shops. His debt reaches more than $28,000.

Zak and Fara confirm that many farmers are keen to harvest before the end of the waiting periods.

Fara said that he has not taken any educational courses with the ministry, that he only reads the instructions in Arabic on the product and applies them. “If the land necessitates the use of Nemacur, an agricultural engineer from the ministry comes to inspect the land and gives permission to buy the pesticide,” he said.

Adli Doji works on the land owned by Fara. He does not use a mask while he sprays the crops with pesticides. “I sometimes suffer from coughing and irritation in my eyes. I am not used to working with the mask on my face. It does not really matter; I have been working on the land since I was 10 years old,” he told Al-Monitor.

Zak added, “Crop failures and lack of marketing as well as the high prices of pesticides and fertilizers are the main problems facing farmers. Moisture, pests, insects, worms, white flies and spiders are the main reasons behind crop failures.”

Al-Monitor relayed these comments to Saleh Bakhit, an official in the Ministry of Agriculture. I brought my can of Nemacur. There is no translation in Arabic on the product, despite that being a condition for bringing any pesticide into the Gaza Strip.

“All products that enter through the Kerem Abu Salem crossing are controlled. If the staff had noticed that there were no instructions in Arabic, they would have banned it. Regarding the fact that you bought the product without a permit, this is due to the fraudulent ways of traders, away from the eyes of the ministry,” he said.

Regarding the cylinder of bromide gas, Bakhit confirmed that the gas has been recently banned and the factory in Israel has been shut down. He added that perhaps some farmers have kept old cylinders in storage.

“Every year, about 550 tons of pesticides enter the Gaza Strip, and 20 tons have been removed since the beginning of 2014. They are put into storage, as it is internationally banned to dispose of them, given their danger,” he added.

The ministry includes 125 agricultural engineers, a small number compared to the area of agricultural land in the Gaza Strip. However, the ministry is organizing training sessions to educate farmers.

During the interview with Al-Monitor in his office at the ministry, Bakhit said, “What matters is to abide by the waiting period for every fertilizer, which can have negative impact on the citizens’ health if it is not observed.”

Bakhit also noted that high-performance liquid chromatography technology in Gaza, “which is able to detect the remnants of pesticides in crops, has been disabled since 2006 and Israel is not allowing us to send it abroad to fix it.” He said they are waiting for a new machine, as a part of the Qatari grant.

But while illegal and toxic pesticides continue to be applied in Gaza’s farms, the health hazards to locals continue to rise.