Israeli warplanes bombed the largest warehouse of agricultural material in the Gaza Strip, burning tons of dangerous pesticides and setting off an unfolding environmental disaster. 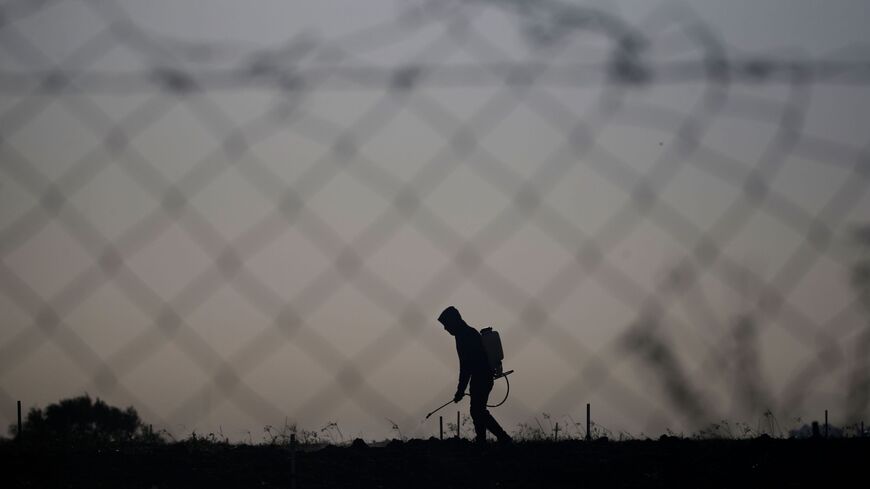 A Palestinian farmer sprays his farm with pesticides in Beit Lahia in the northern Gaza Strip on Dec. 31, 2019. - MOHAMMED ABED/AFP via Getty Images

GAZA CITY, Gaza Strip — As he was trying to calm his terrified grandchildren during Israel's bombing of the Gaza Strip on May 15, Mahmoud Khudair received a phone call telling him that the storehouses of his family's business, the Khudair Pharmaceuticals and Agricultural Tools Company, had been bombed.

He hurriedly called the fire department to put out the huge fire that spread over company's six acres in the Beit Lahia neighborhood of al-Atatra in the northern Gaza Strip. Hundreds of tons of pesticides, fertilizers and agricultural materials such as plastic, nylon and water pipes stored by the four companies that make up the Khudair group went up in flames.

The 11-day Israeli military offensive against the Gaza Strip that began on May 10 killed 256 Palestinians. More than 300 industrial and commercial facilities were damaged and seven factories were completely destroyed, according to the Gaza government. UNRWA estimated the damages to industrial facilities at about $40 million.

With the burning of the Khudair storehouse, one of the largest in Gaza, the besieged enclave has lost more than 50% of its agricultural production materials, most of it imported from Israel.

Khudair told Al-Monitor the intensity of the fire was too much for the firefighters. “In half an hour, everything we owned was gone,” he lamented.

In 1978, Khudair started selling agricultural supplies and established his company, Khudair Brothers, the largest of the group's four companies. He estimates his losses at more than $10 million.

The companies employ 25 workers in addition to more than 200 others who work indirectly in shops that distribute the warehouses’ goods to farmers from northern Gaza to the far south.

Khudair said that small fires are still spewing smoke and causing very unpleasant odors in the area. The fire forced Khudair’s family and about 28 others to leave their homes. “As a result of the suffocating fumes, my wife was hospitalized four times. Her health is still deteriorating,” he said.

Al-Monitor also spoke to Haitham Khudair, owner of the Lamor Company established in 2006 as part of the Khudair Group. The company sells pesticides, fertilizers and plastic tools to farmers. Over 400 types of pesticides, fungicides and modified seeds were burned in the Israeli strike.

Haitham said he is still shocked at the loss of his company, which he did not dream would be bombed. “Everything that enters these warehouses is approved by Israeli security. Materials are stored in an area very close to the fence separating Gaza and Israel,” where Israel can easily monitor it.

The director of the Soil and Irrigation Department at the Ministry of Agriculture, Nizar al-Wahidi, warned of short- and long-term damage from the destruction of the Khudair warehouse. “The direct damage is environmental pollution. The fire changed the physical and chemical properties of the soil and the underground water reservoir.”

Wahidi, who was on the committee that studied the impact of the 2008 Israeli Operation Cast Lead on the environment in Gaza, explained that toxic substances could affect humans through the food chain as animals consume contaminated plants or through the aquifer.

George Karzam, the editor of the Palestinian Afaq Environmental and Development Magazine, said that the “bombed Khudair warehouses contained lethal chemical pesticides that are banned [in some countries, including Israel]. Toxic gases emitted by the burned pesticides are hundreds of times more toxic and dangerous to humans and the environment than the inherent toxicity of pesticides during their normal use.”

Karzam told Al-Monitor, “By bombing pesticide stores, Israel intended to expose residents of Gaza to pathogenic and deadly chemical gases. This is tantamount to bombing with chemical weapons of mass destruction. Israel knows exactly the types of toxic and dangerous pesticides stored in this warehouse, since it is the supplier of these substances. This deliberate bombing is a direct and lethal use of chemical weapons.”

Majid Shannoun al-Saadi, an Iraqi chemical expert at the Iraqi Ministry of Higher Education and Scientific Research, told Al-Monitor that the deliberate bombing of chemicals, especially agricultural pesticides, amounts to direct use of chemical weapons.

Saadi, who participated in the study on chemical waste treatment in Iraq supervised by the UN Organization for the Prohibition of Chemical Weapons, said the bombing of plastic material results in toxins that are hazardous for the environment and health, such as dioxins, heavy metals and organophosphorus compounds that pollute the water, soil and air.

He added, “This will poison food supplies and cause health problems such as infertility, cancer, hormonal imbalances, mental impairment, immunity problems and other issues.”

Saadi called for an urgent international probe to assess the damage to the polluted areas, saying that due to the blockade, Gaza does not have the necessary equipment to do so.