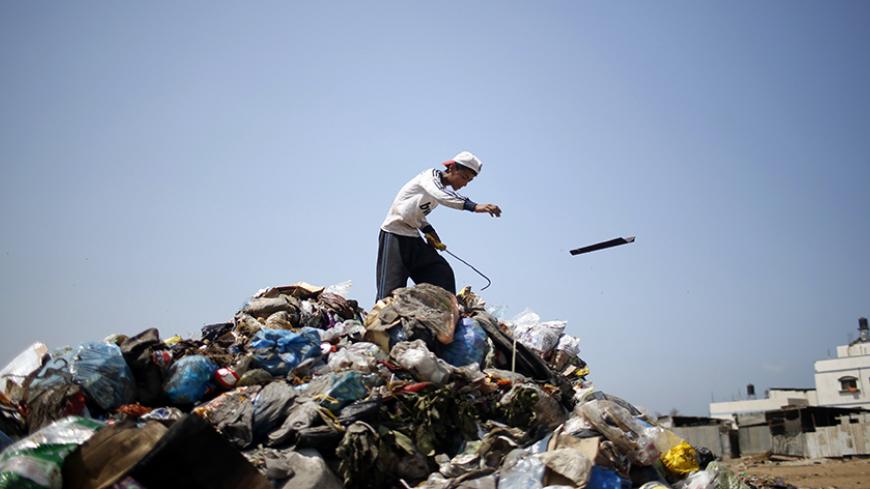 A Palestinian sifts through garbage for salvageable items at a local dump in Gaza City, Sept. 2, 2013. - REUTERS/Mohammed Salem

GAZA CITY, Gaza Strip — The waste landfill is located less than 1.5 kilometers (0.9 miles) away from the house of taxi driver Mohammed Abu Issa, who lives in the agricultural village of Hajar al-Deek in the east of Bureij in the central Gaza Strip.

Abu Issa, 40, often sees young boys and farmers heading to the solid and organic wastewater basin next to the landfill to collect some of this wastewater to use in spraying crops.

“I also hear farmers saying that they put this wastewater on their crops," he told Al-Monitor. "They send some boys to bring these quantities so as not to raise suspicions. However, sometimes they go there themselves, once every week or 10 days. They say this wastewater helps ripen crops quickly.”

These practices are the result of solid waste disposal in Gaza, as the amount of daily waste per capita increases year after year.

Abdel Fattah Abed Rabbo, associate professor of environmental science at the Islamic University of Gaza, said each citizen in the Gaza Strip generates more than 1 kilogram (2.20 pounds) of solid waste per day.

“Waste is not sorted or separated into plastic waste, glass and organic waste, sand," he told Al-Monitor, "but all [types are] mixed together and thrown in the streets. Therefore, the separation process is nonexistent in our culture, and that in itself is a problem. This leads to toxic wastewater.

Musleh told Al-Monitor that the reality of solid waste disposal is difficult.

“Gaza produces 1,700 tons of waste per day, about 67% of which are organic, 11% are plastic and 12% are paper, and the rest are metals and glass and other waste materials,” he said. “We face many problems, including the annually increasing volume of waste because of the high population density, changing consumption patterns, diversity of food stuff and products, and the lack of environmental awareness among the population. This increase is not coupled with ameliorative technical measures such as increasing the landfill’s space, machineries or number of workers, in addition to the fact that the estimated useful life of landfills in the Gaza Strip has expired.”

Musleh said the only waste disposal method used in Gaza is landfilling of household solid waste. “This waste is dumped in landfills and compressed and a layer of sand is placed over it," he said. "Hazardous waste will either be burned in hospital incinerators or taken to a landfill allocated for hazardous waste located in the village of Hajar al-Deek in the east of Bureij.”

The Solid Waste Council that operates in the Gaza Strip is responsible for solid waste management in the central governorates and Khan Yunis and Rafah, where 50% of Gaza’s waste is generated. Its mission covers waste collection to waste disposal.

Ali Barhoum, executive director of the Solid Waste Management Council, indicated that the current waste disposal operations are unhealthy, describing the situation as “difficult and dangerous,” causing pressure on the environment and constituting a great challenge. “This is especially true given the lack of a system for sorting out hazardous household waste, he said.” “Things are bad because the landfills were designed [to be used] for a short period of time, which should have expired in 2008. The blockade experienced by Gaza and the nondisbursement of the donors’ funds negatively affected the situation.”

He pointed out that the council faces many problems regarding proper solid-waste disposal process. Barhoum also called on the council to request funding from international donor organizations, such as the World Bank, the European Union and the French Development Agency, to establish a modern landfill in the Gaza Strip.

“This landfill would be exemplary, since it would include a waste separation stage phase. But there are some obstacles that are hindering its completion, such as slow procedures for compensating the owners of the lands on which the landfill would be built,” he added.

In light of this dire reality, solid waste continues to be an abnormal health and environmental situation adversely affecting the environment and the health of citizens in the Gaza Strip.