A recent $1 billion Arab League pledge is not expected to go far in a city that is severely neglected and devoid of political representation, reports Jihan Abdalla. 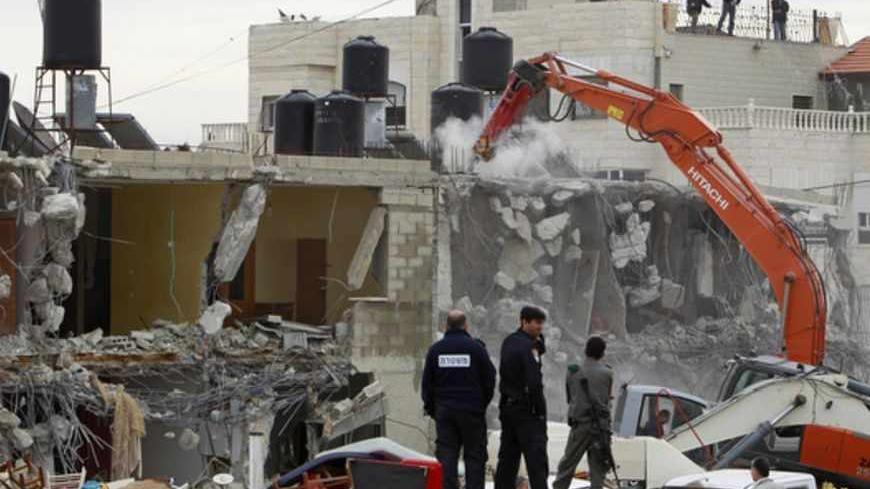 Israeli police officers look on as an excavator demolishes a house in the east Jerusalem neighborhood of Beit Hanina, Feb. 5, 2013. - REUTERS/Ammar Awad

JERUSALEM — Once the political, social and commercial hub for Palestinians, Jerusalem has slowly disintegrated into an isolated, neglected and impoverished city as Israel continues to tighten its grip on the Holy City.

Cut off from adjacent Palestinian cities in the occupied West Bank by Israeli army checkpoints and a separation barrier, residents of east Jerusalem say they struggle to protect their livelihoods and presence in the city.

When Israel occupied east Jerusalem including the Old City in 1967, in violation of international law, Palestinians living there were given permanent-resident status rather than citizenship.

Since then, Palestinians say, Israel has sought to force them out of the city and established a Jewish majority that would make any peace deal that would divide the city impossible.

For Israel, Jerusalem is its "eternal and indivisible" capital. For Palestinians, it is a symbol of their national struggle and home to al-Aqsa Mosque, Islam's third holiest site.

Mahdi Abdul Hadi, chairman of the Palestinian Academic Society for the Study of International Affairs, says establishing east Jerusalem as a capital of a future Palestinian state is central to any final peace agreement with Israel.

“Everyone knows that without Jerusalem, there is no Palestine,” Abdul Hadi told Al-Monitor.

Some 360,000 Palestinians live in mostly crowded, run down, garbage-strewn neighborhoods in Jerusalem. They constitute 38% of the city's total population.

As Israel continues to build Jewish settlement homes in and around the city, and encourages Jewish settlers to take over Palestinian homes in east Jerusalem, Palestinians say Israel is working hard to "Judaize" the city.

In the east Jerusalem suburb of Silwan, home to over 50,000 residents, the streets are narrow, steep and potholed. Israel plans to demolish 88 homes in the neighborhood of al-Bustan to make way for the development of an archaeological park called King David’s Garden.

If the plan goes forward, Palestinian rights group al-Haq says more than 1,500 Palestinians will be forcibly evacuated and left homeless.

More than 500 Jewish settlers have moved in to Silwan since the early 1990s, bringing armed security guards, armored vehicles and surveillance cameras.

Since Israel took over the city, it has demolished over 2,000 homes in Jerusalem, according to the Israeli Committee Against House Demolitions, and Jewish settlers have taken over one third of the land in east Jerusalem.

Residents of Silwan say their lives are consumed with the imminent fear of demolition and daily friction with the settlers.

Ahmad Qareen was shot twice in the legs three years ago by a settler guard and walks on crutches. He is now unable to work and his family relies on his wife’s income.

A month ago, Qaraeen’s 15-year-old son was detained along with his friends outside his school, and released 12 hours later.

“Every family here has, at any given time, at least two or there lawyers representing them,” Qareen tells Al-Monitor, “whether to fight a pending demolition order on their home or to free an imprisoned child.”

On March 26, the Arab League pledged to establish a $1 billion fund “to protect the Arab and Islamic character of the city and reinforce the steadfastness of its people,” according to the draft resolution.

The Palestinian Authority (PA), under the Oslo Accords agreements signed in 1994, retains no jurisdiction in east Jerusalem. The fate of the city and its shrines was at the time left to be determined in final status talks with Israel.

The PA is generally skeptical of Arab aid pledges, as few Arab countries have carried through on past promises. For example, a $500 million pledge for Jerusalem in Sirte, Libya in 2010 was never fulfilled.

But Palestinian analysts say the emir, who is seeking greater involvement in the Palestinian issue, is expected to live up to his promise.

He became the first head of state to visit the blockaded Gaza Strip last year, and pledged $400 million to finance projects there which have already begun.

Palestinian officials say proposals for projects in east Jerusalem have already been submitted and it is up to the Islamic Development Bank to decide which programs to finance.

The Israeli Foreign Ministry condemned the initiative, calling it "a badge of shame" for Qatar.

Putting out the small flames

Palestinian cartographer Khalil Tafakji says since 2001, Israel closed down 26 Palestinian institutions in east Jerusalem, most notably the Orient House, the headquarters of the Palestine Liberation Organization.

“The void created by the absence of institutions and effective policing has given rise to a culture of gangsters, drugs and crime,” Tafakji tells Al-Monitor.

The Association for Civil Rights in Israel says 78% of residents live below the poverty line.

A report published in December last year by the International Crisis Group, a conflict-resolution organization based in Brussels, said the absence of institutions, political parties or security forces has drastically disintegrated east Jerusalem.

“Palestinian Jerusalemites increasingly are adrift, bereft of representation and lacking resources. East Jerusalem has become a rough and angry place, more and more disconnected from its West Bank hinterland,” the report said.

Abdul Hadi says the different institutions operating in the city (a few Palestinian but mainly international organizations) are each individually trying to tackle the different issues that plague Jerusalem.

Poverty, unemployment and lack of services, housing and education are only some of the chronic issues that Jerusalem suffers from, he says. And the Arab league fund, if it comes through, would just reinforce the piecemeal approach.

“No one is trying to deal with all of the issues under a comprehensive, strategic plan,” he says. “It’s been a battle of putting out small flames, rather than the big fire.”

In Silwan, despite having to pay taxes to Israel, the neighborhood receives very few municipal services. The roads are in poor condition and there are no sidewalks. There is no post office, day-care centers, parks or libraries. Just a few meters away, a short row of settler homes have a neatly paved road and streetlights.

The Jerusalem municipality contends that in the past, Arab neighborhoods have been neglected, but say efforts are increasing to improve services in east Jerusalem.

Qareen says the municipality gives demolition orders for homes built without permits on a nearly daily basis. He says building permits are virtually impossible to obtain and many people have been forced to build without them to accommodate for their growing families.

“Every day we wait for surprises, more demolition orders or trucks. Nothing is out of the question.”