Israel, US coordinated on settlement construction

Israeli Prime Minister Benjamin Netanyahu seems to be able to walk between the raindrops by approving hundreds of new housing units in the West Bank without upsetting the Americans. 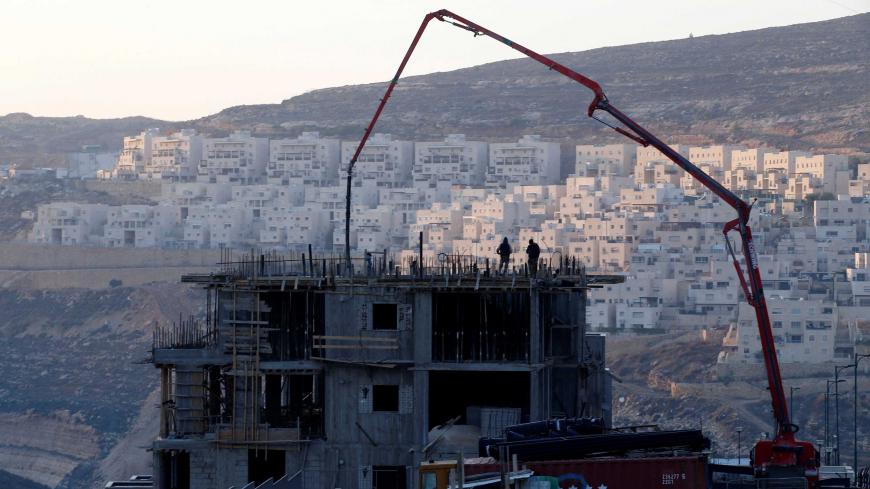 A construction site is seen in the Israeli settlement of Givat Zeev, in the occupied West Bank, Dec. 22, 2016. - REUTERS/Baz Ratner

Israeli Prime Minister Benjamin Netanyahu recently pledged the construction of 3,800 new housing units in West Bank settlements. But in fact, the civil administration’s High Planning Council approved only a few hundred Oct. 16-17. This elicited a bitter argument among leaders of the settlement umbrella organization Yesha Council, who had hoped to obtain many more construction permits.

But despite the settlers’ criticism over the reduced number of permits, they could not decide whether to issue a sharp protest or launch a full-blown campaign against Netanyahu. Head of the Samaria Regional Council Yossi Dagan, who pushed for a more aggressive approach, was forced to accept a limited, almost private, protest against delays in the paving of bypass rounds for settlers to use around Arab villages and other security measures to prevent terrorist attacks.

This internal argument among the settlers and, especially, its consequences, are indicative of Netanyahu's considerable maneuverability and of his ability, at least for now, to wiggle his way without angering either side. On one the hand, he is renewing settlement construction, even if only on a limited scale. On the other hand, he is doing this without really upsetting the US administration or the settlers.

US presidential candidate Donald Trump made statements during his campaign in favor of the settlement enterprise, but once Trump was elected, Netanyahu decided to take a careful approach, rejecting several requests to build new housing units in the West Bank. This comes after eight years of the Obama administration, in which construction was effectively frozen, since settlements were considered to be an obstacle to any potential agreement between Israel and the Palestinians.

Discussions about new construction with Trump's team, headed by envoy Jason Greenblatt, lasted two months. They ended with agreement on a new outline. According to one senior political source, speaking on condition of anonymity, the guiding principle behind this outline is, "Don’t surprise us." What this effectively means is that construction can only be advanced after coordination with the White House. Apart from Greenblatt, the American team also includes US Ambassador to Israel David Friedman and staff members from the embassy and the consulate in Jerusalem. According to the Israelis, they are directly involved in the discussions and are intimately familiar with every detail, including every movement on the ground. Among the tools at the Americans' disposal are satellite imagery, but they also keep close tabs on publications about the issue. Nevertheless, Trump's pro-Israel appointments, including Greenblatt and Friedman, and his overall change in policy regarding Israel and the settlements, often face a stubborn State Department, which preserves the old policy of restraint in construction, if only partially.

Netanyahu presented several of these understandings to the Cabinet in March and received its approval for the new outline. In June and again in September, Netanyahu decided to postpone approval of new housing units at the behest of the Americans, since they were trying to get negotiations with the Palestinians started again. Apparently, this postponement can also be attributed to the ongoing process of internal Palestinian reconciliation and increased Egyptian involvement in the region.

But Netanyahu eventually did give the green light. The planning committee met last week and approved the construction of hundreds of new units. Dozens of new units were approved in Hebron, while 300 were approved in Beit El. Similarly, a new settlement, Amichai, was also approved for the settlers evacuated from Amona in February. The permits were granted in accordance with agreements reached with the Americans.

The political source listed the basic agreements reached with Trump's envoys: In Area C, which is under Israeli civilian and security control, construction was limited to new housing units adjacent to existing units. There will be no new construction at a distance from existing settlements, and there will be no new outposts. Special permission was given to establish Amichai, because of the evacuation of Amona. In addition, there is a limit on the number of housing units in every new West Bank project. There is almost no restriction on construction in Jerusalem, but even there, new construction must be adjacent to existing structures. Construction in the major West Bank settlement blocs is not restricted.

The source noted that according to the procedure agreed upon by the parties, once each construction project is approved in Israel, it will be brought before the Americans. Only after discussions with them will a final list of projects be brought to the Cabinet for approval. Once that happens, the projects will be sent for planning.

Peace Now, a left-wing organization that polices settlement construction, claims that 6,500 new housing units will be advanced through the process this year, as compared with just over 2,600 last year.

Still, the settlers aren't really happy about it. Dagan told Al-Monitor, "It is inconceivable that all construction in Judea and Samaria will require American approval. We are very disappointed in the way the prime minister is acting, especially toward a particularly supportive US administration and the most right-wing government Israel has ever had." Dagan claims that the fact that so many Republicans support Israel should be used as leverage to overturn the restrictions. He said that over the past few months, he hosted several American politicians from the president's own party, including former Arkansas Gov. Mike Huckabee and Alan Clemmons of the South Carolina House of Representatives.

In contrast, David Alhayani, head of the Jordan Valley Regional Council, told Al-Monitor that while the number of construction permits is, in fact, small, they are what he calls "high-quality permits," referring in particular to new housing units in Hebron, Beit El and Amichai. Nevertheless, even he was critical of the way discussions are held with the Americans, describing them as "failing." Avi Roeh, the head of the Yesha Council, said that while Israel should not need any US approval to build, and while thousands of housing units are on hold due to White House opposition, the situation is still much better than it was under the Obama administration.

In his Sept. 27 meeting with the leaders of the settlers, Netanyahu quoted Friedman, who cited a Talmudic adage at a meeting with the Israeli team, saying, “If you have seized a lot, you have not seized” (Yoma, Chapter 8). Netanyahu was hinting to them that it is in the interest of the settlers to keep the United States on Israel's side, which is why the Israeli government must be careful to coordinate construction with them, even if it is slow and even if the numbers are less than expected.

In sharp contrast to the American response is the reaction by the European Union, which commented on the announcement of renewed construction by saying that it "would severely jeopardize the contiguity and viability of a future Palestinian state" and that "all settlement activity is illegal."

The approval of these new housing units helped only partially to settle the growing sense of unease in the Netanyahu government. Ministers from HaBayit HaYehudi may have approved the construction outline with the Americans in March, but they continued to protest the postponements and delays. Even among Netanyahu's own party, criticism has intensified, especially among the right-wing flanks, led by Tourism Minister Yariv Levin and Deputy Foreign Minister Tzipi Hotovely. On the other hand, Netanyahu received the support of his defense minister, Avigdor Liberman.

Speaking on condition of anonymity, a senior associate of Netanyahu summarized his guiding principle as "the ability to maneuver between internal politics, the egos of the coalition partners, genuine construction needs and the limitations imposed by our friend in the White House." But, he warned, what seems like a relative achievement now could collapse if one of the political partners mistakenly concludes that reshuffling the deck vis-a-vis the White House could get the government more.