Prime Minister Benjamin Netanyahu is in a tough spot trying to please his right-wing electoral base with more settlement construction without upsetting President Donald Trump with too much construction. 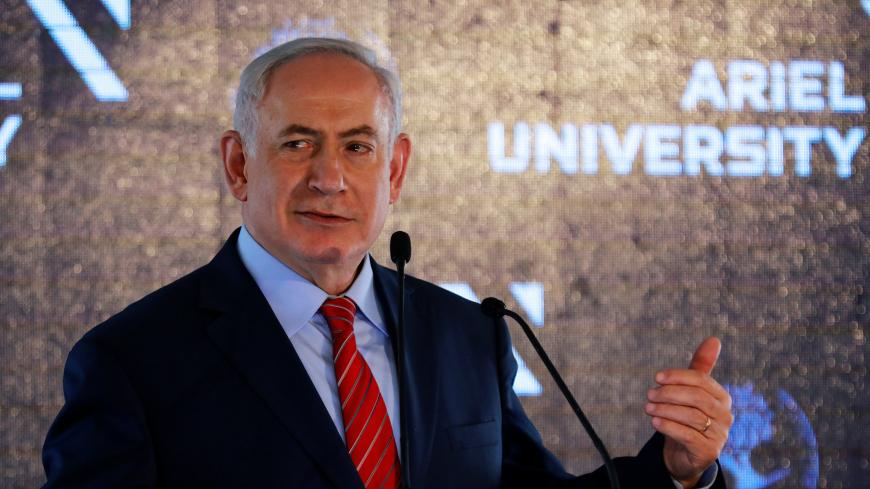 Israeli Prime Minister Benjamin Netanyahu speaks at a cornerstone-laying ceremony for the Miriam and Sheldon Adelson Health and Medical Sciences School building, at Ariel University, in the Israeli settlement of Ariel in the occupied West Bank, June 28, 2017. - REUTERS/Amir Cohen

The heads of Israel’s right-wing coalition discovered last week that Prime Minister Benjamin Netanyahu had secretly promised the US administration to restrict construction of additional housing units in West Bank settlements. The de facto situation in the settlements reflects this pledge. Settlers, who anxiously awaited the replacement of their nemesis, former President Barack Obama, by the new Messiah, Donald Trump, have had a rude awakening over the past nine months. Trump assumed office, but the anticipated construction boom in the West Bank has not materialized. The boom may even have become a bust.

In the wake of Netanyahu’s reported pledge, one of the Likud’s leading hawks, Minister of Jerusalem Affairs and Environmental Protection Zeev Elkin, launched a rare on-the-record broadside against the Trump administration. “This administration feels comfortable changing the obligations set out by the Obama administration in the climate agreement and with many other things, but. … they are clutching at the same idea that building beyond the Green Line is a negative Israeli step,” Elkin said in an interview.

The wrath of the settlers and of right-wing government ministers, as expressed by Elkin’s outburst, was also directed at US objections to the renewal of the long-suspended construction of 31 settlement housing units in the Palestinian city of Hebron. Hebron, however, is not the only problem.

“US envoy Jason Greenblatt sits with the people in the Prime Minister’s Office [to debate] every brick we want to put down in the West Bank,” a senior Israeli minister and member of the diplomacy-defense Cabinet told Al-Monitor on the condition of anonymity. “Israel never had to get advance permission for every nail someone hammers into some plank on the ground. This is not what we expected from the Trump administration.”

Netanyahu himself told settlers at a Sept. 27 meeting on the eve of Yom Kippur that even US Ambassador David Friedman, considered a staunch and active friend of the settlements, was exerting heavy pressure on the Israeli side. According to several participants at the meeting, Netanyahu even mimicked Friedman, who speaks good Hebrew, using a known Talmudic saying that loosely translates, “If you have seized a lot, you have not seized” (Yoma, chap. 8). According to Netanyahu, Friedman often uses this saying in demanding that Israel refrain from construction in the settlements.

Following these reports, the Prime Minister’s Office fired off an announcement on Oct. 8, trumpeting the approval of more than 3,800 new housing units in the West Bank. The proclamation was intended to sooth settlement leaders and the right-wing flank of the ruling coalition, HaBayit HaYehudi, which is threatening sanctions against the Netanyahu government unless it soon improves the situation. Netanyahu and his associates claim that this approval for construction constitutes a clear departure from previous US policy on construction restrictions, auguring many additional housing units.

“This is the first time that the Americans have approved construction within isolated settlements, and not only in the main settlement blocs. In fact, they have abandoned the distinction between the blocs and isolated settlements,” a senior diplomatic source in Jerusalem told Al-Monitor on the condition of anonymity.

The settlers themselves, however, appear singularly underwhelmed by such pronouncements. The government ministers on the right also know the truth: “Every housing unit given a green light in Judea and Samaria [the West Bank] goes through four public approval cycles, at least,” Elkin noted to Al-Monitor, “and that’s why the real figures are far lower.”

Yossi Dagan, head of the Samaria Regional Council, currently considered the most influential settlement leader, elaborated. “Of over 3,000 housing units, the real number is far lower than 1,000,” he told Al-Monitor. “And here, too, the number includes houses that were built in the 1990s and are now being granted retroactive permits. These are not real figures.”

Dagan expressed his frustration in no uncertain terms. “When Obama was president, we were told he was hostile to Israel, and we mustn’t anger him and clash with him,” Dagan said. “Now that Trump is president, we’re being told that he is an Israel supporter and sees eye-to-eye with us, and therefore we mustn’t anger him and clash with him. This is unbearable, because meanwhile you have half a million people waiting for the embargo on construction to be lifted, desperately needing additional housing units, and there are none.”

A delegation of pro-Israel lawmakers from around the world visited Israel on Oct. 8, led by Rep. Alan Clemmons from South Carolina. “Clemmons was the one who amended the Republican Party platform prior to the last elections,” Dagan said. “He is the one who removed the two-state solution from the platform for the first time. I told him about the strict construction restriction imposed on us by the Trump administration, and he was very surprised.”

Dagan believes Israel has nothing to fear from a public confrontation with the Trump administration on the settlement issue. “He would not dare do what Obama did at the UN Security Council,” Dagan said, referring to the former president’s decision not to veto a resolution demanding an immediate halt to all Israeli settlement construction. “The president’s electoral base is evangelists. He knows this full well, and he would not do things to risk losing his base.”

Dagan's words make sense, unlike some of Trump’s actions. Trump does not operate according to the rules of the political game. He is unpredictable and capable of damaging his own base in the heat of the moment. That is why Netanyahu, at this stage, is tiptoeing around Trump, reluctant to take him on.

During the lengthy discussions between Netanyahu’s and Trump’s people on the construction issue, the prime minister’s associates have tried explaining that Netanyahu’s political base is demanding significant construction in the settlements. They liken his political base to Trump’s voters, hoping the Americans will understand what Netanyahu is getting at and give him some leeway to appease his electorate. For now, this tactic is having very limited success.

“Trump’s base,” one of the settlement leaders told Al-Monitor, speaking on the condition of anonymity, “is apparently not made up only of evangelists. He is also tied and connected to the Arab world — the Saudis, the Qataris, Jordan and Egypt.”

There’s something else: “Over the past year,” admitted a settler leader on the condition of anonymity, “most of those in the Trump White House who think the way we do have been sidelined. That leaves mostly those who have no sentiment for Jewish settlement in the West Bank. They are the ones whispering in his ear, and they’re the ones with whom he has to deal.”