Will settlers' anger push Netanyahu into Blue and White's arms?

Yamina and settlers leaders are demanding that Prime Minister Benjamin Netanyahu unilaterally annex West Bank territory despite the objection of the White House, but their campaign runs the risk of backfiring politically. 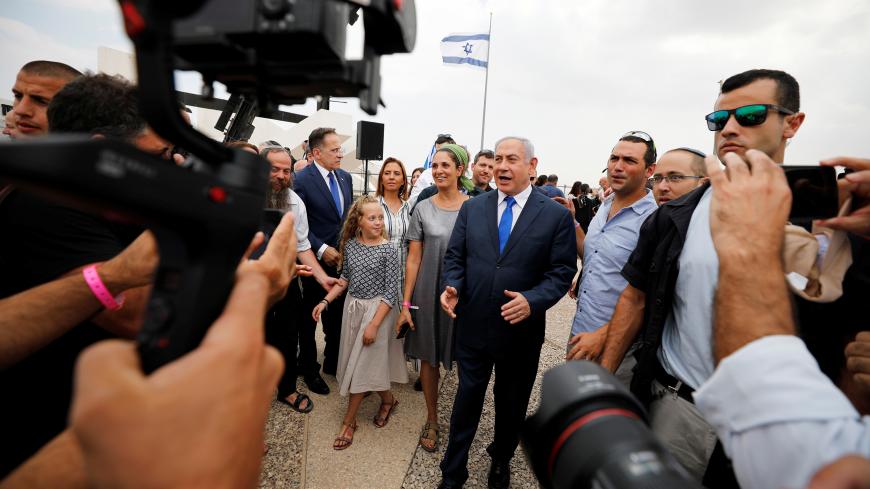 The campaign being waged by leaders of the Yesha Council to annex parts of the West Bank is not only intensifying, but expanding in scope as well. What was once a campaign limited to pressuring Prime Minister Benjamin Netanyahu has grown to encompass the Donald Trump administration and its leaders, until recently the settlers’ best friends. One possible consequence is that the settlers will end up distancing themselves and the religious Zionist movement that backs them from Netanyahu, pushing him into the arms of the Blue and White in a unity government.

Yossi Dagan, head of the Samaria Regional Council and considered the “foreign minister” of the settler movement, has emerged as the most strident proponent of the attacks on Netanyahu and the US administration. It all began when settlers erected a protest tent outside the Prime Minister’s Office on Feb. 4.

“We all respect the president of the United States, Trump, who leans in Israel’s favor much more than his predecessors,” said Dagan. “But Mr. Prime Minister, we elected you in an election in the State of Israel, we didn’t elect Trump, we didn’t even elect Jared Kushner. The State of Israel is not a banana republic. We won’t be a tool for the internal intrigue within the White House.”

The settlers blame infighting at the White House for the delay in annexing the territories, a provision of Trump’s peace plan. The disagreement involved US Ambassador to Israel David Friedman, who originally supported the immediate annexation of at least part of the territory, and White House seniors Jared Kushner and Jason Greenblatt, the architects of Trump's “deal of the century,” who opposed it. Friedman was eventually forced to walk back his earlier position and on Feb. 9 clarified that imposing Israeli sovereignty on any part of the territories before the upcoming election would put implementation of the peace plan at risk, and with it the US agreement to recognize the settlements and their annexation as part of the overall plan.

Until now, Friedman was considered one of the settlers' closest friends. Left-leaning Haaretz has called him, “the settler in the White House” and warned that Friedman's unilateralism could lead to a break with the Palestinians and harm any chances of renewing the peace process. Friedman has visited the settlements regularly and made use of his speeches to explain why he thinks it is important to protect them. In February 2018, he warned that evacuating settlers would lead to civil war in Israel and that Israeli sovereignty over the Jordan Valley is vital to the country’s security. His ardent advocacy on behalf of the settlements has not helped him since he voiced his opposition to immediate annexation.

Dagan attacked the ambassador in language far from diplomatic: “I very much respect David Friedman,… but … our prime minister is Benjamin Netanyahu, not David Friedman. The period of the High Commissioner is over,” said Dagan in a statement, referring to the British authority that ruled over Palestine before the establishment of Israel. “As Prime Minister of Israel, Benjamin Netanyahu must show the same level of leadership as Menachem Begin, and announce today that he will bring his annexation proposal before the Knesset either tomorrow or Sunday. There is no reason to dilly-dally or drag it out until after the election since it might not happen then. I call on Benjamin Netanyahu to put our dear friend in the US administration in his place. Sometimes even dear friends need to be put in their place and told that … we are a sovereign country and sovereignty will be extended to Judea and Samaria [West Bank] as the public in the State of Israel expects.”

David Elhayani, head of the Jordan Valley Regional Council and chairman of the Yesha Council, the settlers' umbrella organization, told Al-Monitor that they plan to recruit support from the leaders of the evangelical community in the United States, one of the largest interest groups with sway over the administration. The settlers believe that only support and assistance from within the United States will force the Trump administration to support Israeli sovereignty now.

Elhayani, a secular Likud supporter, opposes the Trump plan because it allows for the possibility of a Palestinian state. He claims that Netanyahu had actually planned to immediately annex West Bank territory, but the Americans “stabbed him in the back” in anger when they realized that his supporters on the right would not agree to the plan because of the Palestinian state provision.

The settlers' discontent has entered the political arena with just three weeks to go before the March 2 election. Members of Yamina, the religious Zionist party with its powerbase in the settlements, have attacked Netanyahu and demanded that he impose Israeli sovereignty now. According to media reports, the Feb. 9 Cabinet meeting began with a sharp verbal exchange that some ministers said led to shouting and to Netanyahu angrily pounding the table. After Netanyahu described the plan, for the most part correctly, as his greatest diplomatic achievement, because it meant US recognition of the settlements, Transportation Minister Bezalel Smotrich voiced Yamina’s opposition to recognition of a Palestinian state and outrage at the Likud’s attacks on his party. “From where you stand now, you would support [Palestinian] statehood if the Palestinians meet all the conditions,” Smotrich said to Netanyahu.

Minister Gila Gamliel responded, “We could only dream of this kind of agreement, so don’t come lecturing the prime minister. Stop prodding and trying to interfere with such an enormous achievement.” Minister Yariv Levin also came to Netanyahu’s aid, stating, “Your [Smotrich’s] stubborn insistence on raising it here causes us enormous damage and puts our ability to come to terms with the process at risk.” The discussion ended with Netanyahu making the interesting comment that he does not need a government decision to agree to a Palestinian state. “The Americans are not asking for that,” he said.

Against the backdrop of this developing conflict, there is increasing fear among Yamina and the settlers that Netanyahu might come to prefer forming a unity government with Blue and White, which has expressed support for Trump's plan. One Yamina minister who spoke to Al-Monitor on the condition of anonymity, said, “Netanyahu will not hesitate for a minute. If a unity government provides him with the opportunity to remain prime minister for no matter how long, he would prefer that over having a fourth round of elections in the course of a single year, when his trial has already started.”

While people in Netanyahu’s inner circle don’t deny this, they couch it differently. Another Likud minister who requested anonymity, asserted, “This is a historic achievement, but instead of celebrating American recognition of the settlements, the settlers are piling up obstacles, all because of some mention of a Palestinian state, even though such a state will never be created, because the Palestinians will fail to meet the basic conditions [set out in the plan]. They [the settlers] would rather burn the plan, and with it our relationship with the friendliest administration ever, all in the name of a radical ideology. Yes, a coalition with Blue and White is a reasonable option if there is no other choice, and if [Blue and White leader Benny] Gantz and his fellow party members agree to President [Reuven Rivlin]’s [rotation agreement] outline.”