With President Donald Trump and Prime Minister Benjamin Netanyahu entangled in domestic scandals, a dramatic launching of a peace process might serve them well in terms of media coverage. 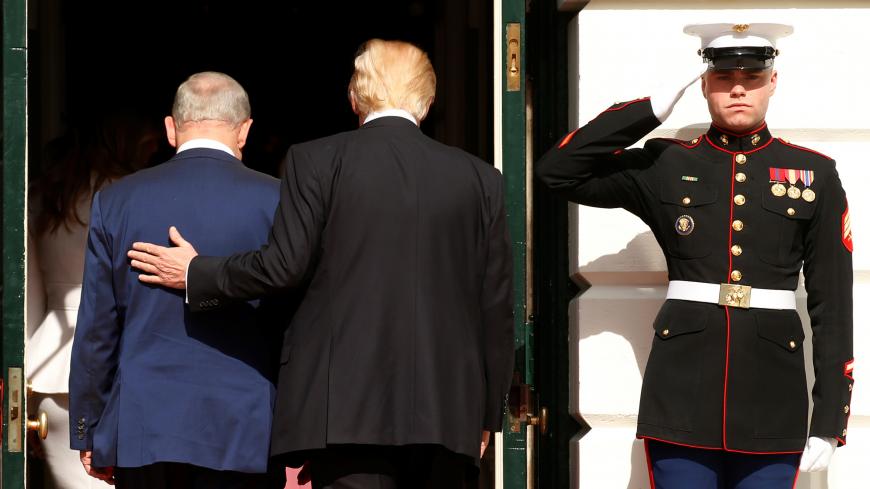 While the corridors of power and media in Jerusalem and Ramallah are buzzing with rumors over Prime Minister Benjamin Netanyahu's and Palestinian President Mahmoud Abbas' successions, there may be a scenario that could sustain their rule, at least for some time.

According to the White House, President Donald Trump is dispatching his Middle East peace process team to the region to resume talks with both sides. At the end of August, senior White House adviser and Trump son-in-law Jared Kushner, envoy Jason Greenblatt and deputy national security adviser Dina Powell will arrive for a new round of talks in Jerusalem and Ramallah.

A senior PLO official with good ties to the Trump administration argues that the US president would like to explore ways in which a negotiation process could be launched in 2017. His analysis is that a peace process surrounded by some media drama could serve the political interests of all three leaders: Trump, Netanyahu and Abbas.

Trump and Netanyahu are deeply concerned about domestic inquiries. The liberal political and media circles that have an interest in the speedy conclusion of the investigations into Netanyahu could shift their attention to a breakthrough in the Mideast peace process, the Palestinian source says. Also, Trump is obviously challenged by the crisis with North Korea, yet a solution may take time and would depend mostly on China and Russia. Abbas may have similar interests, given the despair in Palestinian public opinion.

A senior US Embassy diplomat told Al-Monitor on condition of anonymity that Washington is seeking to explore ways to advance peace negotiations later this year under Trump's auspices. The diplomat believes that Netanyahu is ready to engage with the president and his team, although Netanyahu’s basic positions and conditions have not changed. According to the diplomat, Netanyahu has been given the green light from his right-wing political partners to begin talks with the Palestinians without a full freeze of settlement construction. The diplomat is of the impression that Abbas may show flexibility in the conditions for negotiation, as long as Jordan, Egypt and Saudi Arabia back him. The United States is also talking with Cairo, Amman and Riyadh.

The diplomat said the United States is interested in exploring three simultaneous approaches for progress. The first is creating a platform for the launch of direct Israeli-Palestinian negotiations on all permanent status issues. Pragmatic Arab states such as Egypt, Jordan and Saudi Arabia, as well as the Arab League, would partake in the opening of such negotiations. These talks would launch under Trump's auspices, with the United States facilitating the overall progress.

The second approach explored is the US demand on both sides for confidence-building measures, such as the improvement of security cooperation, restraining settlement construction, curbing any incitement to violence by the Palestinian Authority and developing more economic cooperation agreements between Israel’s finance minister and the PA. In that respect, Finance Minister Moshe Kahlon receives very high grades for his constructive positions vis-a-vis the Palestinian economy.

The third parallel approach is creating a regional track to hold discussions between security experts of the United States, Egypt, Jordan, Saudi Arabia, Israel and the PA to enhance anti-terror cooperation. Most of these discussions would take place bilaterally between each of the partners and the United States.

According to the US diplomat, Abbas knows he will not get from the United States the terms of reference for negotiation based on the 2002 Arab Peace Initiative, but it may suffice that Egypt, Jordan and Saudi Arabia come to these talks with a unified position on the basis of negotiations.

Netanyahu knows that he will not get Palestinian recognition of a Jewish state at these talks, but he may get an American backing for such a position.

The senior PLO official confirmed that the United States has been building on these approaches, which he described as constructive ambiguity by an unpredictable American president. Abbas will be positive in the upcoming talks with the US representatives, but he will criticize them for their pro-Israel bias. He will emphasize that these efforts are the very last window of opportunity for a diplomatic process. His participation in negotiations will depend on the backing of the Arab countries, primarily Egypt, and by the scope of Israel's settlement construction.

A senior Israeli Foreign Ministry official who spoke to Al-Monitor on condition of anonymity confirmed the renewed US interest in peace talks. He said Netanyahu demands extensive exploration and preparations for such eventual talks and will continue to define to Trump's team the "non-starter" positions of Abbas.

Is launching peace negotiations currently possible? Judging by the two parties’ positions on the substance of permanent status issues, the answer is probably negative. Yet the PLO official may be right that such a process might take place after all, given the domestic political problems of Trump, Netanyahu and Abbas.