Netanyahu ready to meet Abbas, but not to negotiate

While the Palestinians hope that President Donald Trump will deliver a realistic negotiations process on a two-state solution, the Israeli side is determined to jeopardize such a process. 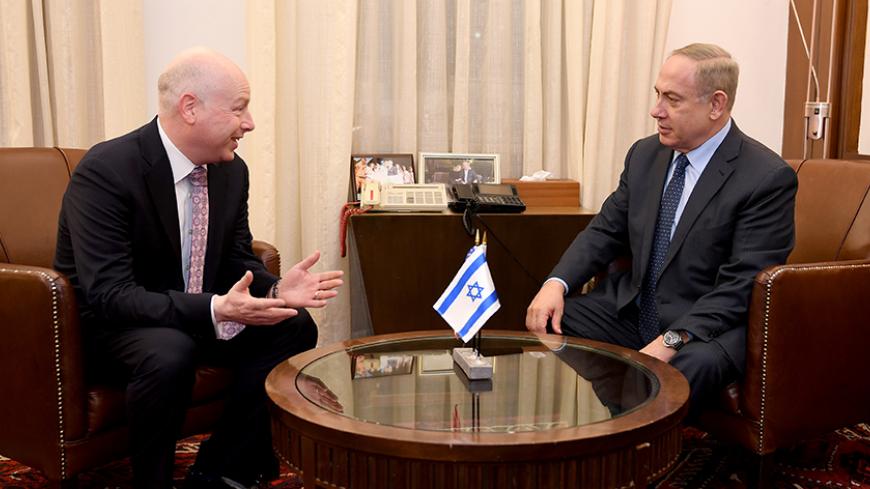 President Donald Trump has been advised by his inner circle and by former administration officials with experience in the Middle East peace process to stay out of an Israeli-Palestinian peace process. Everybody told him that both sides are unwilling to make the necessary compromises. Prime Minister Benjamin Netanyahu is both unwilling and unable politically, and Palestinian President Mahmoud Abbas, while possibly willing to compromise for statehood, is politically too weak to make the necessary concessions.

A senior PLO official close to Abbas told Al-Monitor on condition of anonymity that the Palestinian diplomatic strategy remains to engage positively with US envoy Jason Greenblatt as well as with White House senior adviser Jared Kushner. Both Greenblatt and Kushner visited Israel and the West Bank on June 21-22. The Palestinian strategy includes expressing readiness to take part in a regionally backed opening to permanent-status negotiations, while assuming a de facto freeze on Israeli settlement expansion. The Palestinian leadership is conveying to the Trump administration in great detail its positions on all permanent-status issues. There is cautious optimism in Ramallah.

On the Israeli side, there is greater concern with the US administration’s possible diplomatic moves. A senior Israeli ambassador currently engaged with policy planning at the Foreign Ministry told Al-Monitor that the Netanyahu government has a very clear strategy. According to this official, Israel is not interested in a launch of the peace process by Washington. Netanyahu is ready to participate in a meeting with Trump, Abbas and other Arab leaders. On the other hand, a type of Madrid 2 Conference in Washington is rejected at the highest Israeli levels, as is any other American move that could endanger the stability of the current right-wing coalition. The official added that Israel’s strategy will be a mixture of positive rhetoric and moves toward Trump’s policies with policy conditions that will make it difficult if not impossible for the Palestinians to accept such a negotiation process.

Israel has conveyed to Greenblatt that the prime minister is ready to participate in a regional strategy meeting in Washington chaired by Trump and also to meet with Abbas. The participation in such a meeting is conditioned on the Palestinian Authority's taking action to stop incitement to violence and to halt all payments to the families of terrorists and prisoners in Israel. According to the senior Israeli official, the government is convinced that Abbas will not stop the payments to the Palestinian families, as it affects almost a quarter of the Palestinian population.

Furthermore, according to this official, while Netanyahu has agreed to restrain settlement expansion, construction will continue both in the Jerusalem area and outside of the settlement blocs, thus giving partial satisfaction to Naftali Bennett’s HaBayit HaYehudi party.

In the talks with Greenblatt, Israel has emphasized its principles for any potential settlement with the Palestinians. In permanent-status negotiations, Israel will insist that all of the West Bank remain under Israel’s overriding security responsibility and that the Palestinians will only maintain a police force for public order that will cooperate with Israel on the prevention of terror.

Also, Israel will demand the Palestinian leadership recognize Israel as the homeland of the Jewish people. The border will be based on Israel’s security needs. Much of today’s West Bank area C (under Israeli control) will come under Israel’s sovereignty, and Jerusalem will remain the united capital of Israel. A Palestinian capital will be established outside of Jerusalem. Israel will respect the freedom of faith of all three monotheistic religions. There will be no right of return for Palestinian refugees to Israel. Israel will agree to limited Palestinian statehood, assuming Israel’s two fundamental principles are met — recognition of a Jewish state and Israel’s security responsibilities over the West Bank.

The Foreign Ministry official further said that Israel will insist in the negotiations on immediate normalization of relations with the pragmatic Arab states. The timeline for the implementation of such an agreement would depend on the security situation in the West Bank and Gaza and would not be less than 10 years. The Gaza Strip, under the same leadership as the West Bank, would be part of such a deal.

These positions have been conveyed orally to Greenblatt. According to the senior Israeli Foreign Ministry official, these positions reflect Netanyahu’s real opening approach for future negotiations, but are also intended to convince Trump that an “ultimate deal” is mission impossible.

For his part, the senior PLO official described these Israeli positions as proof that Netanyahu’s policies for the future are to perpetuate the occupation. “It is easier to convince the Palestinians to move to the moon than to accept these positions even partially.” Indeed, it seems that while the Palestinians hope that Trump will deliver a realistic negotiations process on a two-state solution, the Israeli side is determined to jeopardize such an undertaking.