Instead of specific terms of reference, US President Donald Trump is reshaping rather vague guideline principles, creating a symmetry between Israeli and Palestinian interests. 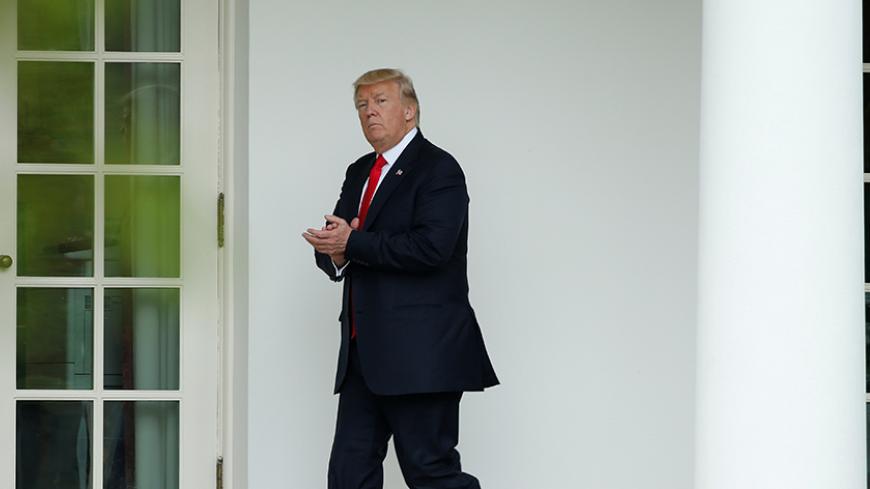 US President Donald Trump walks to the Oval Office at the White House, Washington, June 7, 2017.

Jason Greenblatt, the US presidential envoy to the Israeli-Palestinian peace process, has become quite an expert on the intricacies of inter-Arab relations. He has also become much familiar with the most minute details on the agenda of permanent status issues. For instance, he knows the demographic composition of each East Jerusalem neighborhood; he knows which settlement belongs to which settlement bloc for possible land swap; and he knows what kind of intelligence technology the United States could put at the disposal of Israel after an Israel Defense Forces withdrawal from territories in the West Bank and the Jordan Valley.

A senior PLO official who participated in the talks with the US envoy told Al-Monitor that the Palestinian negotiation team led by the secretary-general of the PLO, Saeb Erekat, is very impressed with Greenblatt's know-how, open mindset and apparent neutrality. According to the official, Greenblatt is assisted by diplomatic personnel from the US Consulate in Jerusalem and its embassy in Tel Aviv. The source noted that Greenblatt is very target oriented and is working diligently for the launch of a regionally backed Israeli-Palestinian peace process in September 2017.

The Palestinian leadership was very pleased with President Donald Trump's decision not to move the US Embassy to Jerusalem, and especially for the reason given: the need to aspire to a peace process. The PLO source said that President Mahmoud Abbas took credit for it and thanked President Abdel Fattah al-Sisi of Egypt, King Abdullah of Jordan and King Salman bin Abdul-Aziz Al Saud of Saudi Arabia for their support. The source emphasized that after the Riyadh summit (during Trump’s May 20 visit), coordination between the leaderships of the Palestinian Authority, Egypt, Jordan and Saudi Arabia has strengthened; the four leaders aim to insert the 2002 Arab Peace Initiative into the American’s terms of reference for the opening conference of the negotiations. The deep rift between the United States and the European Unit on the Paris Climate Accords generated greater Palestinian focus on their dialogue with Washington.

The PLO official added that according to current Palestinian assessment, the administration staff will upgrade its activity through the next months in order to propose to Trump a set of founding principles as a basis for a regional conference to launch the negotiations. It is also possible that Secretary of State Rex Tillerson will visit the region in the near future in this context.

The Palestinian negotiating team believes that, unlike President Barack Obama, Trump will stay away from detailed terms of reference that will predetermine permanent status issues. The official believes that Trump’s guideline principles will be relatively vague, creating a symmetry between Israeli and Palestinian interests. Possible guidelines as the Palestinians have heard from their sources at the US Consulate in Jerusalem may include seven or more elements.

A first principle would be that of peace between the two parties that puts an end to the conflict. Another element would be the right of each side to determine its future and character, in the context of peaceful coexistence. A third principle would be stringent security and anti-terror arrangements, especially regarding Israel’s security and Palestinian demilitarization. The guidelines will also include a role for Jordan and the Arab League in security monitoring after a permanent agreement, backed by the United States; settlement building restraint by Israel during the negotiations; and normalization of relations by the Arab states with Israel in parallel to the negotiations. Finally, the guideline will determine that the negotiations need to deal with all permanent status issues, including Jerusalem and refugees.

A senior Israeli Ministry of Foreign Affairs official who participated in some of the Jerusalem meetings with Greenblatt downplayed this Palestinian version. According to him, Abbas is in dire need of a diplomatic achievement. The US administration is still far from making a decision on whether to publicly announce any American position. “We have made clear to the American envoy that Israel will insist on two conditions upon which we are ready to start negotiations with Abbas. Stop all incitement to violence, and commit not to transfer funds to terrorists and their families. So far, Abbas has refused these basic demands. You cannot promote terror and negotiate at the same time,” said the source, speaking on condition of anonymity.

The Ministry of Foreign Affairs source noted that the Trump administration is interested in renewing the peace process and that there are differences of opinion between Israel and the United States on this point. Still, he argued that Trump understands well the domestic situation in Israel. He further explained that in any negotiations, Israel will demand recognition as a Jewish state, and that after reaching an agreement, Israel will be responsible for security in all of the West Bank.

And so, between these positions of the two sides it will be virtually impossible for the US administration to square the circle, yet one should not underestimate Trump’s resolute. He is determined to defeat the Islamic State; in that respect, renewing the Israeli-Palestinian peace process would serve him well. Trump is not pro-Israel or pro-Palestine. Trump is pro-Trump.