Is US disengaging from Israeli-Palestinian conflict?

With a weak Palestinian leader and a peace-rejectionist Israeli prime minister, the Obama administration is reluctant to impose itself on the two parties and might prefer a disengagement doctrine. 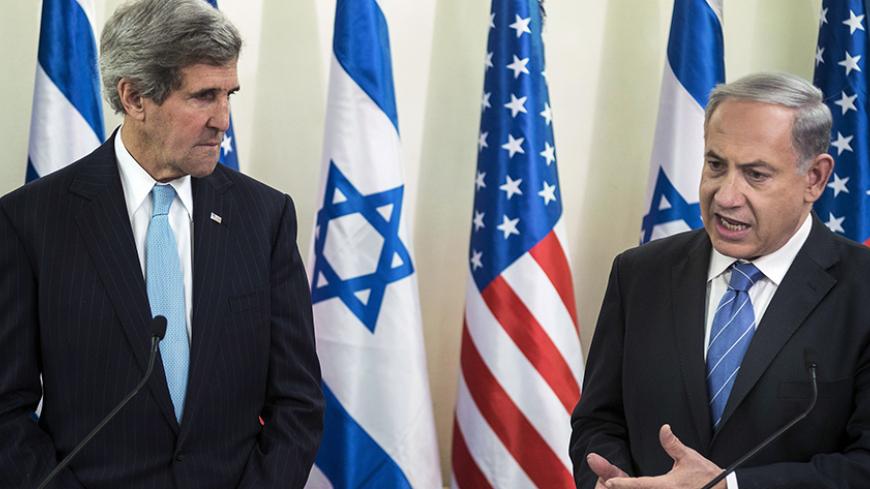 US Secretary of State John Kerry listens as Israeli Prime Minister Benjamin Netanyahu makes a statement to the press before a meeting at the prime minister's office in Jerusalem, Jan. 2, 2014. - REUTERS/Brendan Smialowski/Pool

The May 14 Camp David Summit between President Barack Obama and leaders of the Gulf counties was only a partial success. Saudi Arabia's King Salman bin Abdul-Aziz Al Saud stayed away, as the US president was not ready to negotiate a defense pact that would protect the Gulf against Iranian ambitions. Obama did, however, assure his interlocutors from the Gulf that the United States' prime goal was preventing Iran from developing nuclear weapons and that his administration will continue to strengthen Gulf security and interests.

A senior source in the State Department told Al-Monitor that this attitude of not bending over backward to the oil-rich countries accurately reflects Obama's foreign policy approach.

The source described the various pillars of Obama's foreign policy doctrine, with the first one referring to the use of force as a last resort. He explained that according to the Obama doctrine, the United States does not consider its armed forces the main vehicle for advancing foreign policy interests, but an important deterrent. The Obama administration views other tools, such as US technology, industry, academia, culture and aid policies, as assets no less important to foreign policy interests. The United States can be a superpower by using its soft power skillfully.

Obama does not believe that the use of force by itself can produce either foreign policy gains or resolve long-term conflicts. Nor should the United States act on its own — the president is a great believer in collective diplomacy, as in the cases of Syria and Iran.

Another important pillar is America's economic well-being. This is a major consideration in US foreign policy, hence the emphasis on its relationships with China, Japan, India, the European Union and the Americas. In this context, trade and environmental agreements are as imperative as military pacts.

Another essential, perhaps game-changing, element of this doctrine is energy. Under Obama, the United States is working on energy self-sufficiency. With time, this focus may lead to a distancing from the Gulf and the Middle East.

In addition, explained the source, the president objects to assisting countries economically or militarily while they maintain a hostile position toward the United States and its interests. In exchange for its support, the administration will seek a quid pro quo in terms of respecting US interests.

This policy doctrine means bad news for the Middle East, Arabs and Israelis alike. The days when one could ask for US support and then burn American flags in mass demonstrations are over. So are the days when one could count on secret US military intervention and then condemn it. The Middle East, mired in religious, political and ethnical conflicts, is in the eyes of Washington more of a hopeless case than a strategic asset.

Gulf oil is still significant to the US economy, following its crucial influence over global energy prices. But it is becoming less critical in terms of energy sources, due to increasing US self-sufficiency. In this global-economic reality, and in view of Obama's own beliefs, his administration increases US demands from Middle East countries on US core values, such as democracy and respect for human rights. That is bad news for Egypt, the Maghreb and the Gulf, and it's starting to become a problem even for Netanyahu's Israel.

As for the Israeli-Palestinian issue, it too might be greatly affected by this US disengagement doctrine, for several reasons.

The administration is very disappointed with the policy positions of Israeli Prime Minister Benjamin Netanyahu and Palestinian President Mahmoud Abbas during the peace talks initiated by Secretary of State John Kerry last spring. Thousands of housing units in the West Bank and East Jerusalem and a Fatah pact with Hamas did nothing to increase Israeli or Palestinian credibility in the American eye. The United States cannot desire peace more than the parties themselves.

Also, Netanyahu has lost all credibility and friendship in the White House. Siding with the Republicans on the Iran nuclear issue in their policy struggle against the president did not make him very popular in the Oval Office. The same goes for his rejection of a two-state solution, his intention to expand settlement construction and his attitude toward Israeli Arabs as declared during his latest election campaign.

To that, one might add the fact that the Palestinians suffer from a distancing of Washington from the Arab world in general, given the failure of the Arab Spring.

The United States considers Abbas a reasonable but weak leader in the face of the Hamas opposition, a situation that hardly encourages a greater US engagement.

Altogether, the Obama administration is not inclined to assist Israel, or for that matter Palestine, despite themselves. So Israelis and Palestinians alike can conclude that we are on our own.

This disengagement by Washington is understandable. But since Middle Eastern leaderships are reluctant to face it, dangerous consequences loom for the region. One can foresee a continuous stalemate between a rejectionist government in Israel and a weak one in Palestine, both unable to engage in conflict resolution on their own and both losing international support. That will inevitably lead to the strengthening of the extremists on both sides, including Hamas as well as the settlers represented in the Israeli government. It will ultimately result in violence in the form of terror or intifada, and possibly a new round of violence in Gaza. Then, after blood is spilled and the dust settles, the international community might decide to intervene again.

Hence, the United States would be better served to intervene before — aware of the flaws of the engaged parties — for its own interests. And contrary to prior failed negotiation rounds, the United States together with the EU should propose this time a "take it or leave it" framework agreement, with dire consequences for rejection.

Such an attitude would still be in line with the Obama doctrine of collective diplomacy, and still fall in line with his approach of not courting the ungrateful.