Framing the discussion of China's role in the Middle East as a zero-sum game of choosing either US or Chinese patronage has only increased Beijing's clout in the region. 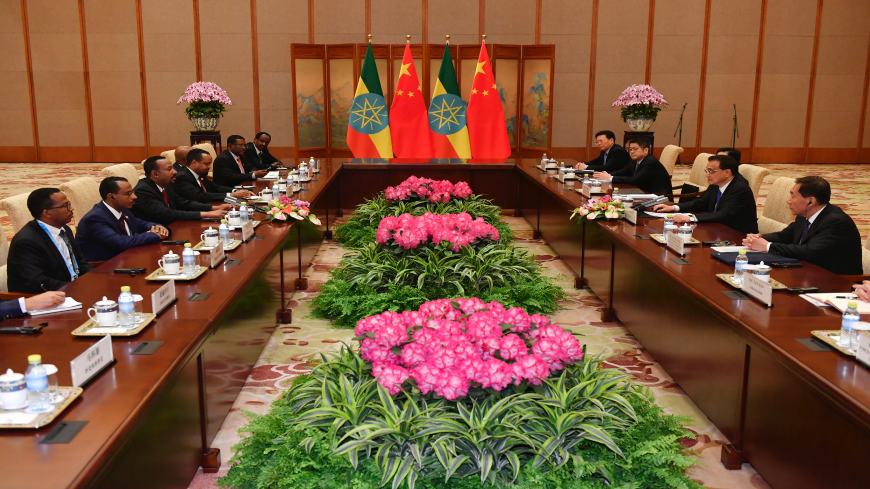 Countering China as an economic power and alternate political and development model is a centerpiece of US national security policy. Countering China in the Middle East, however, has proven challenging due to inconsistencies within US policy and with the growing perception of China's attractiveness to the region. Framing the discussion of China's rise or role in the Middle East to a zero-sum game of choosing either US or Chinese patronage and partnership has served rhetorically only to increase China's stature among the region's political leadership. And relatedly, the US security strategy that explicitly mentions the importance of allies and shared values has failed to rely on those strengths in counterarguments to the Chinese "choice."

The United States has failed to make its own case in the Middle East, mostly because the current administration has undermined the importance of shared values and institutions that demonstrate its superior development model to China's and then failed to demonstrate empirically how it is better. The reality is there is no stark choice for the Gulf states or governments of the broader Middle East to decouple from either the United States or China. The plan to counter China has never been to do it alone. The Trump administration's failure to elevate and amplify its own strategy to rely on allies and shared institutions is an Achilles heel that China and adversaries like Russia see as an easy target.

China cannot compete with the present, consistent US security architecture in the Gulf, but it can needle the sense of US disengagement in the region. And China can alter the framing of how its own presence in the region is measured. China has moved the goal post. By focusing on state investments and publicizing them widely, China has made the US litmus test in the region about bilateral, state finance. In contrast, what the United States and its allies offer the region is a system of access to international capital, to institutions that reward governance, rule of law and ultimately local job creation, rather than the enrichment of state entities, contracts that boost state bank balance sheets, and volatile project flow that rarely creates lasting local growth or employment.

The United States may be a superpower, but it stands on the shoulders of other states, namely the other large economies of the world. The other G7 members are US allies and countries that separate the state from the market and reject state capitalism and authoritarianism. As Zack Cooper has neatly articulated in his examination of weaknesses of the United States' current strategic approach to China, "Many of America’s friends are frustrated that Trump has not united US allies and partners in pursuit of a common goal."

The United States has not recognized how its own presence in the Middle East works in partnership with its allies and how nongovernmental investment, trade and ideas work in parallel and in direct evidence of an alternative to China. It is the movement of capital from non-state actors nurtured and nestled in US institutions and those of its allies that are most active as investors and a force for growth across the Middle East. We should elevate and amplify our collective strengths rather than reduce the choice to a simple "us or them" mentality.

Trump has consistently undermined the constructive role of the United States in the international system. China has seized the opportunity. Growing, developing states in the region are made to think there are two options rather than a whole set of partners and supporting institutions that stand in contrast to what China is selling. Opponents of a "New Cold War" fret the United States is pushing China into a corner and that confrontation with China will undermine diplomatic success in bringing China into the fold of international norms and increased economic liberalization. But really it is China that benefits from pushing developing countries into a false dichotomy.

Often cited as the region's most important source of foreign direct investment, China is really only active as a source in a few key states, mostly in the Gulf. The reasons for the Chinese presence as a contractor in the Gulf and co-investor in Gulf infrastructure and energy projects are simple. The Gulf oil exporters want to maintain a good customer service relationship with China, state-to-state investments can avoid the public scrutiny of bond offerings and disclosures to international investors, and sometimes the deals are just faster and easier to close. China is a good partner in some investments and loans that don't make economic sense otherwise, serving as an alternate balance sheet for state entities on both sides.

Chinese foreign direct investment across the Middle East and North Africa is not consistent over time, tends to be concentrated in a few key locations and creates few jobs (mostly because large contracting projects rely on imported labor in the Gulf or itinerant labor in other countries.) Data compiled from fDi Markets and AEI's China Global Investment Tracker comparing Chinese capital expenditure and job creation in Jordan, Egypt, Oman and Ethiopia demonstrate how combined private investment from the United States, United Kingdom and European Union consistently outweigh Chinese investment over time, looking at the period between 2014-2020. Interestingly, so does investment from Gulf Arab states. China gets all the credit by framing foreign investment as a bilateral phenomenon rather than facilitated and amplified by shared institutional norms and regional priorities.

The problem is that the US-China dichotomy is self-defeating. From its beginning, the Trump administration has seen international political economy from a statist perspective, not from an institutional perspective in which an array of US interests are served. The United States does not command its investors, its firms or their interests. It defends an environment, including in the Middle East, that is conducive to their growth. This environment is a set of institutional norms, practices and beliefs that open markets, rule of law, and free movement of ideas, people and goods make us all better off.

In essence, the Trump administration has been as much of a proponent of state-led growth as the Chinese, who are now discovering the use of their own entrepreneurial class to advantage "going out" across Africa and the Middle East. The Middle East has choices, its own regional development actors, and a set of consistent and engaged sources of investment from the United States and the largest economies (and strongest militaries) in the world. There is no logic to a choice between the United States and China, only opportunities lost.