Has China gained an edge on the US in the Gulf?

China has upped the ante, but the United States holds the winning hand; Oman weighs risks and benefits of Gulf bailout; will migrant workers return to GCC? 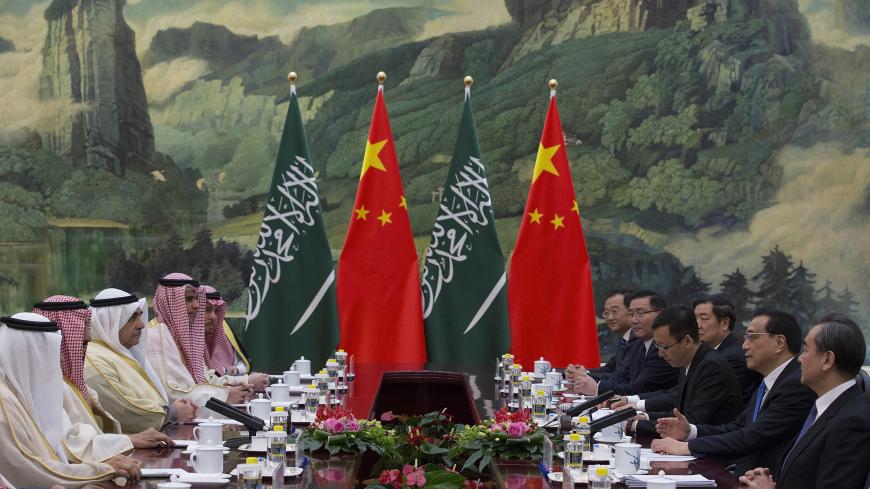 The International Monetary Fund (IMF) revised downward its forecasts for economic contraction this year as a result of both COVID-19 and declining oil prices, as we report here.

The IMF now projects a 7.6% contraction in gross domestic product, a key measure of economic output, for the GCC in 2020, compared with its April forecast that there would be a 3% decline this year.

Contributing to the drop is a projection that Saudi Arabia’s economy will shrink 6.8%, nearly tripling the April estimation of a 2.3% decline.

The downturn in GCC economies has limited the prospects and planning for the GCC and frames the emerging contest between the United States and China in the region.

The "false choice" between the US and China in the Gulf

The commander of the US Central Command, Gen. Frank McKenzie, said last month, “Russia doesn’t have the economic resources to come into the region in the way that China does,” and that the United States must “confront” China’s economic advances in the region, as we report here.

In a must-read assessment of how the US-China strategic competition plays out in the Gulf, Karen Young , a resident scholar at the American Enterprise Institute and contributor to Al-Monitor, makes the case that there is no real choice between Washington and Beijing for Arab Gulf states seeking global partners for trade and investment.

And if there is such a "choice," she argues, it’s because the United States has let China get the jump in public diplomacy.

“By focusing on state investments and publicizing them widely, China has made the US litmus test in the region about bilateral, state finance,” writes Young. “In contrast, what the United States and its allies offer the region is a system of access to international capital, to institutions that reward governance, rule of law and ultimately local job creation, rather than the enrichment of state entities, contracts that boost state bank balance sheets, and volatile project flow that rarely creates lasting local growth or employment.”

On this score, the United States is not, nor should it be, losing a contest for economic influence. Chinese business in the region is of a different scope.

“The reasons for the Chinese presence as a contractor in the Gulf and co-investor in Gulf infrastructure and energy projects are simple,” Young explains. “The Gulf oil exporters want to maintain a good customer service relationship with China, state-to-state investments can avoid the public scrutiny of bond offerings and disclosures to international investors, and sometimes the deals are just faster and easier to close. China is a good partner in some investments and loans that don't make economic sense otherwise, serving as an alternate balance sheet for state entities on both sides.”

“The United States has not recognized how its own presence in the Middle East works in partnership with its allies and how nongovernmental investment, trade and ideas work in parallel and in direct evidence of an alternative to China,” adds Young.

“There is no logic to a choice between the United States and China, only opportunities lost,” Young concludes.

Oman seeks to avoid getting pulled into Gulf disputes

The IMF projects a GDP decline of 2.8% this year for Oman. Compounding its woes is Oman’s public debt, which averaged 85% of GDP even before the COVID-19 and oil price crises.

Muscat this year drastically cut its expatriate work force and retired large numbers of civil-service employees to reduce public expenditures, and the Oman Investment Authority is consolidating and taking control of $17.7 billion worth of assets that have been held by the sultanate’s sovereign wealth funds, as Sebastian Castelier reported here.

These cuts have led to Oman’s first budget surplus in years, but it’s still just a start. Muscat will likely still seek financial assistance from its Gulf neighbors, but, as explained above, those coffers are mostly bare because of the regional economic downturn.

It’s also complicated by regional politics. Oman worries that seeking a bailout from the United Arab Emirates and Saudi Arabia, on the one hand, or Qatar, on the other, could draw it into the current divide within the GCC, Castelier writes, something it has until now avoided by maintaining an independent and neutral foreign policy posture.

Seeking assistance from within the region, however, would mitigate Omani dependence on China, to which it is heavily indebted.

The safest provider of aid would likely be Kuwait which, like Oman, maintains a neutral posture in Gulf affairs. Last year Kuwait invested $2 billion in Oman’s Duqm refinery.

“However, hit hard by the coronavirus pandemic and low oil prices following half a decade of budget deficits, Kuwait is expected to be the only country in the world to run a budget deficit above 30% of GDP, according to estimates, Castelier explains. “Qatar, which is expected to be the only Gulf country to run a fiscal surplus this year despite an ongoing global recession, could play a key role.”

Will migrant workers return to GCC?

The economic downturn and budget cuts in the GCC have forced the region to trim its dependence on foreign workers. “Masses of low-income migrant workers lost their jobs and returned to their countries, even though there was little chance of employment back home,” writes Sabena Siddiqui.

Siddiqui notes that GCC development often depends on "vision” plans and megaprojects, including in Saudi Arabia and the UAE, and a high percentage of both the skilled and unskilled workers necessary to implement the projects come from abroad.

But the slowing or cancellation of these projects as a result of the economic downturn means migrant workers may have no work to come back to.

The impact of the economic and labor downturns varies across the region, as the UAE — especially Dubai — depends on tourism, while Kuwait doesn’t, and is instead focusing on reducing the number of expat workers.

Throughout the Gulf, “The demand for high-skilled expats will continue to increase,” Siddiqui concludes, “as it will take years of investment in education, professional skills and training for local citizens to replace them. Meanwhile, unskilled workers will not be required due to popular nationalization drives.”

China in the Mideast
Economy and trade
GCC Relations