The region took a hard hit from the pandemic, and it’s far from over, but Egypt and Saudi Arabia are managing better than expected. 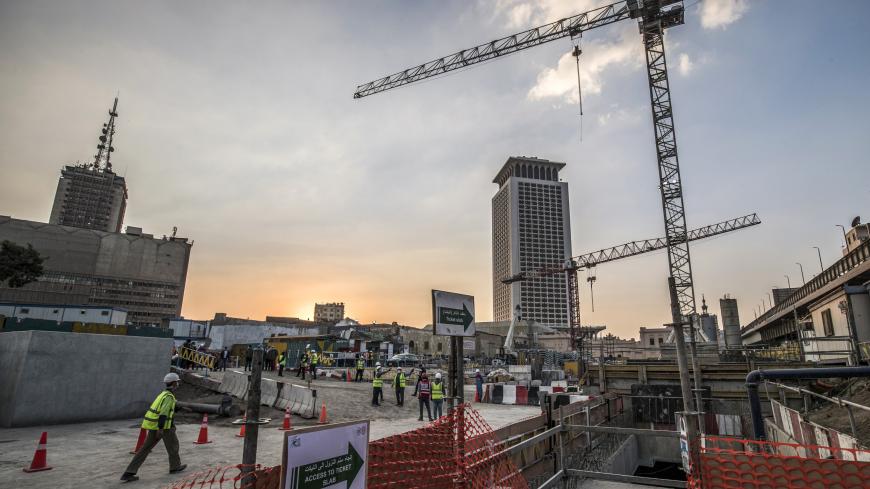 Ongoing construction work at the Maspero station of the Cairo Metro's third line is seen on Nov. 22, 2020, during the visit of France's transport minister; in the background are the Egyptian Foreign Ministry headquarters (R) and the main Maspero Radio and Television Broadcasting building (L). Egypt has the only economy in the Middle East and North Africa that has been growing. - KHALED DESOUKI/AFP via Getty Images

The beginning of the end of the COVID downturn?

The latest International Monetary Fund (IMF) "World Economic Outlook" report this week signals that the transition to the post-COVID economy may come sooner, and with more firepower, than the previous estimate just three months ago.

The improved forecast is in good part based on an expected surge in economic activity later this year as more people are vaccinated.

Another reason is the continued, strong US economic turnaround, which began in the second half of 2020. The United States had an estimated contraction of 3.4% in 2020 (an improvement from the projected minus 4.3% in October), and, with the passage of the December 2020 stimulus, an estimated 5.1% growth rate is expected for 2021, a whopping 2 percentage point increase over the 3.1% projection in October. The Wall Street Journal suggested Friday that the US economy is "poised to surge" and "should stage a mini-boom" later this year.

And then there is China, a global outlier in terms of COVID-19 economic impact, where the economy was estimated to have grown by 2.3% in 2020 and is projected to grow 8.1% in 2021. IMF officials explain China’s performance as the result of "public infrastructure spending support … reinforced by aggressive actions by the People's Bank of China to provide liquidity support and ensure that credit provision remains strong," as well as increases in private sector investment and consumption.

The trend lines also indicate that the gap between advanced and emerging economies will be greater post-COVID, and will reverse hard-earned progress toward global poverty reduction, with an additional 90 million people expected to fall into extreme poverty.

The IMF estimates that the COVID-19 pandemic will cause economic growth in the Middle East and Central Asia through 2022 to be 5.2% lower than it would have been otherwise. While this is worse than the global average of 3.7% in lost growth, the record may be more mixed than the numbers reveal.

"Emerging Asia" (except China), Latin America and sub-Saharan Africa did worse than the Middle East and Central Asia; Europe and advanced economies relatively did much better. The pandemic had the least effect on the economic forecasts for the United States (minus 1.3 percentage point difference) and China (minus 1.5 percentage points).

The Middle East and Central Asia region, like much of the world, showed some overall resilience in the final quarter of 2020, narrowing its projected contraction from 4.1% in October to 3.2%, right in line with the global economy, with an expected growth rate of 3% in 2021 (which is below the global projection of 5.5%).

The good news is that while the report points out that "oil exporters and tourism-based economies within the group face particularly difficult prospects considering the expected slow normalization of cross-border travel and the subdued outlook for oil prices," an IMF official observed that "the effect on oil exporters is not as negative as we might have projected last time around, because in these economies like Saudi Arabia, for instance, we've seen non-oil activity return back much more strongly." But the official also warned of the dire situation of "fragile states" such as Lebanon.

In addition to Lebanon, there are also economic transitions in Iraq, Sudan and Oman, difficult conditions in the West Bank and Gaza, and wars in Syria, Yemen and Libya — the pandemic has taken an exceptionally hard toll on these economies.

With regard to the Gulf, Karen Young writes, "2020 seems to have made a very powerful case for mending fences" and ending the embargo of Qatar. Normalization between Israel and Bahrain, the UAE, Morocco and Sudan couldn’t have come at a better time; Danny Zaken has the latest on the surge in Israel-UAE investments.

Economic recovery will still ultimately depend on how the oil producers adjust to a changing US global energy market. GCC "revenue streams have been devastated by an oversupplied market, a global pandemic has stripped demand for oil, and there is a growing consensus that alternative energy is both a better investment and a political lightning rod," writes Young. "The only recourse is tighter fiscal policy, implementing new taxes and fees, borrowing, and attracting new investment."

Saudi Arabia has managed the pandemic better than expected. Its projected contraction in 2020 narrowed from 5.4% in October to 3.9%, with a projected growth rate of 2.6% in 2021. Sabena Siddiqui writes that the futuristic city of NEOM, a priority project for Saudi Crown Prince Mohammed bin Salman and "a focal part of the kingdom’s Vision 2030 economic program ... could become the showstopper of the Saudi economic makeover if it can compete as a business hub with Dubai."

The pandemic came at a terrible time for Oman, the only Arab Gulf state whose economy is projected to have negative growth again in 2021 — its third straight year of retreat. Sebastian Castelier explains how Sultan Haitham bin Tariq is managing a difficult economic transition with calls for political reform.

… and Egypt’s success story so far

Egypt’s management of the pandemic has been success story. While the rest of the region has been slammed by the pandemic, Egypt’s economy is the only country in the Middle East and North Africa that is actually growing. The IMF says gross domestic product is expected to grow 2.8% in the Egyptian fiscal year that ends in June despite the massive hit to the country's tourism sector and remittance incomes.

The report credits the government of President Abdel Fattah al-Sisi for undertaking "proactive measures" to address health and social needs to mitigate the impact of the virus. Egypt has also stayed the course on the IMF "stand-by arrangement."

Egypt’s progress is both remarkable and fragile, and the IMF notes the risks and uncertainty given the uncertain external environment and the effects of the virus. The IMF also says Egypt needs to stay on track to undertake structural reforms, including support for the private sector and more transparency of state-owned enterprises.

Egypt’s pre-pandemic economic turnaround under Sisi sometimes goes unnoticed, but it shouldn’t. Cairo has mostly adhered to the IMF program, and it hasn’t always been easy. Growth is up and unemployment is down, and the government has rolled back onerous energy subsidies which raised fuel prices on Egyptians already facing hardships. The tough-love economic measures have come at a time as political activists have faced a crackdown on dissent, as Shahira Amin reports.

Egypt’s lessons are especially telling as Lebanon, Iraq and Sudan approach discussions about IMF assistance and reform. These programs often come with a heavy dose of austerity and subsidy reduction, which while necessary in the long run, in the short term increase the economic toll on populations already reeling from weak economies and the pandemic.