Also: Israelis back Trump, Palestinians (kind of) tilt toward Biden. 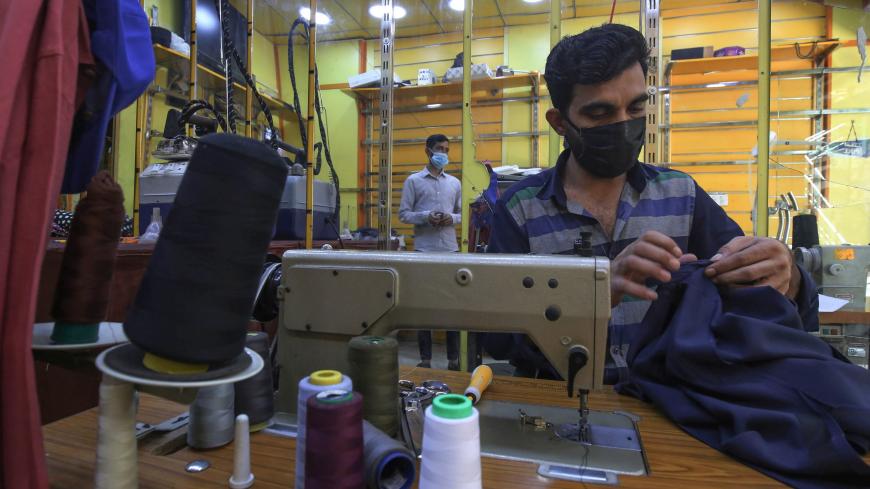 Iraq's is economy is expected to shrink by 12.1% for 2020 due to the coronavirus, and then only grow 2.5% in 2021. Here, Pakistani and Bengali workers clad in face masks work as tailors at a small factory in Karrada, in the central area of the Iraqi capital, Baghdad, on June 23, 2020. As a result of the economic collapse caused by the COVID-19 pandemic, thousands of foreign migrant workers became stranded in Iraq with no income or way to get back home. - AHMAD AL-RUBAYE/AFP via Getty Images

There is (finally and sort of) some positive news on the global economic front this year: The negative impact of the COVID-19 pandemic may be slightly less horrible than what was expected in June, according to the International Monetary Fund (IMF). That’s in large measure due to what one IMF official referred to as a "significant upgrade" for the US economy.

The Middle East and North Africa (MENA) region, however, doesn’t have it so good. Indeed, the IMF warns that the region’s economic performance is likely to be worse off than originally anticipated, lagging even further behind already-negative forecasts. The MENA economy is complicated by a host of legacy issues that predate the pandemic and have only gotten worse because of it.

Global economic growth is expected to decline by 4.4% this year, the IMF says. This is an improvement over the IMF’s last projection in June of a 4.9% decline.

Part of the reason for the uptick are signs of economic turnaround in the United States. US gross domestic product is still expected to contract by 4.3% this year. Dismal, yes — but in June the estimate was for minus 8%. IMF officials say the US "recovery came about sooner" and the "indicators have been stronger" as the US economy began to open up.

The projections for global economic growth in 2021, when the coronavirus pandemic is expected to recede (one of the many caveated assumptions in the report), is 5.2% (down from 5.4% in June), with US growth expected to be 3.1% (that was 4.8% in June).

The Middle East lags behind. The region’s growth forecasts for 2020 have fallen from minus 3.3% in the April IMF report to minus 5% in October. And the projection for growth next year dropped over the same period from 4.8% to 3.2%. MENA had a 0.8% growth rate in 2019.

The reasons for the projected lower growth rates: deep structural problems that have gone from bad to worse as a result of the pandemic. Among them are the wars in Syria, Libya and Yemen; civil unrest in Iraq, Lebanon and Algeria; low oil prices; and economic crises that predate the pandemic, including heavy indebtedness, high unemployment among young people and legacies of corruption, inefficiencies and poor governance.

... and two that are weathering the storm

A word on China

China also appears to be managing the coronavirus pandemic better than most. Its expected GDP growth this year is 1.9% and projected to be 8.2% in 2021.

Israelis rally for Trump; Palestinians (not so much) for Biden

Mazal Mualem reports on a recent poll that almost two-thirds of Israelis would prefer that Donald Trump be reelected US president, adding that Trump may be one of the most popular American presidents ever.

"Given that so many polls predict that [former US Vice President Joe] Biden will win the election," Mualem writes, "some commentators are now saying that this will be a devastating blow to [Israeli Prime Minister Benjamin] Netanyahu. After all, many of Netanyahu’s successes can be attributed to his excellent relationship with Trump. Netanyahu makes sure to use every available platform to talk about Trump’s contributions to Israel," including relocating the US Embassy to Jerusalem, recognizing Israeli sovereignty over the Golan and brokering Israel’s normalization agreements with the Palestinians.