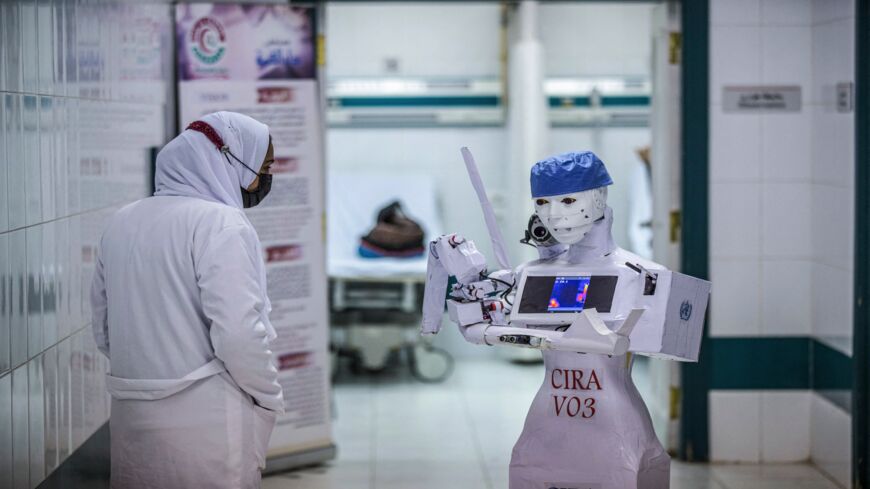 A nurse stands by the CIRA-03 robot prototype built as part of a self-funded project to assist physicians in running tests on suspected COVID-19 coronavirus patients in a bid to limit human exposure to disease carriers, along a hall at a private hospital in Egypt's Nile Delta city of Tanta, on March 20, 2021. - KHALED DESOUKI/AFP via Getty Images

The headline from the International Monetary Fund (IMF) World Economic Outlook update this week is that the keystone of any global economic recovery is vaccination rate for the COVID-19 virus — and the prospect is very much divided between advanced and emerging economies.

No surprise, then, that the Middle East also is split, with Israel and most Gulf states faring better than others still struggling with COVID-19 and its rising Delta variant. Being in the lead, of course, does not mean smooth sailing; even in the United States, cases are up. Low vaccination rates in much of the Middle East, however, are amplifying existing governance and economic challenges and slowing otherwise positive economic trends.

The good news for the region continues to be a rise in oil prices, given the surge in demand following the pandemic. Oil is projected to average $64.68 per barrel this year, up more than 56% over the 2020 average of $41.29 per barrel.

Vaccines are a key variable in global forecasts. According to the Johns Hopkins University coronavirus barometer, only 14% of the globe is fully vaccinated against COVID-19. In advanced economies, the number is 40%; in developing countries, it’s much less than half that.

By comparison, the world leaders in vaccination rates in Western countries are the UK at over 56%; Germany at nearly 51%; the United States at about 50% and France at over 45%.

It goes without saying that Syria, Libya and Yemen, three fragile states in conflict, are especially hard hit. Syria’s vaccination rate is estimated at just 0.05%; there are no reliable numbers for Libya and Yemen.

Iraq: Iraq’s vaccination rate is about 1%, with a population of approximately 40 million. Iraq was especially hard hit by the pandemic in 2020; its economy contracted by 10.9%. The IMF projection for 1.1% growth this year, followed by 4.4% in 2022, is fragile. Iraq’s prospects are buoyed by higher oil prices and US, international and regional support for Iraq under Prime Minister Mustafa al-Kadhimi through greater investment, trade and assistance. Most of the headlines from Kadhimi’s visit to Washington last week focused on the end of the US combat mission in Iraq by year’s end, as Jared Szuba reports, but just as urgent for Iraq is the US donation of 500,000 vaccines through COVAX and related pandemic assistance. Adnan Abu Zeed reports from Baghdad on the Iraqi government’s challenges in dealing with COVID-19, including widespread disregard of public health guidance and reluctance to get vaccinated.

Egypt: With 100 million people, Egypt’s vaccination rate is 1.63%. This number is a potential wild card in Egypt’s otherwise strong economic forecast. The IMF in May praised the Egyptian government’s "resilience" during the pandemic through "swift and balanced" policies. Egypt has been until now a success story of managing the economy during a pandemic, growing by 2.8% last year and projected growth this year of 5.2%. But the low vaccination rate should be a wake-up call. The IMF May report, otherwise mostly positive, warned that "uncertainty remains against the backdrop of lingering pandemic-related risks."

Iran: Iran, with approximately 80 million people, has a vaccination rate of just under 3%. Although Iran has been hard hit by COVID-19, it nonetheless managed, like Egypt — the only two countries in the region — to see positive economic growth last year (1.5%) and is projected to grow 2.5% this year — perhaps more if there is an agreement on the Joint Comprehensive Plan of Action. Iran has instituted another series of lockdowns in response to the latest increase in virus cases, as we report here.

Oman: Oman has a vaccination rate of 6.7% in a country of just over 5 million. Oman has been praised by the IMF for its handling of the pandemic. And despite COVID-19, Sultan Haitham bin Tariq Al Said has mostly stuck to a reform program that was just getting started under his predecessor. As we wrote last month, "While Oman’s economy contracted by a sharp 6.4% in 2020, the contraction was less severe than anticipated. This year the economy is expecting modest growth of 1.8%, according to the IMF, and next year it’s on track for a robust 7.4%, the highest IMF projection for the region."

Tunisia: Tunisia, in the midst of political upheaval, has a vaccination rate just over 8% and a population of 12 million. Its economy was hit hard by COVID-19 in 2020, contracting by over 8.8%. Only Libya (59.7%), Lebanon (25%), the West Bank and Gaza (11%), and Iraq (10.9%) experienced larger contractions. The IMF has projected a turnaround of 3.8% growth this year for Tunisia, but political instability and COVID-19 create uncertainty. An IMF report in February warned that the COVID-19 pandemic was "exacerbating Tunisia’s socio-economic fragilities." Elizia Volkmann reports from Tunis that "multiple changes of health ministers have been perceived to be a cause of the pandemic spinning out of control in Tunisia, with the WHO declaring it the most infected country in Africa with the highest death rate." Mohamed Ali Ltifi, also writing from Tunis, reports that Tunisians see their democracy at risk.

The Delta variant and the slow uptick in vaccination rates in emerging economies, including the Middle East, increases the gap with advanced economies, which seem to have mostly solved the vaccine access and distribution problems. That does not mean, however, the COVID-19 challenge in advanced economies has ended. In the Middle East, the direst COVID-19 crises are of course in the fragile conflict states:  Syria, Libya and Yemen. The West Bank and Gaza are also struggling with the virus, as Mervat Ouf reports from Gaza City. There is encouraging news in Egypt, Oman and Iraq, but COVID-19 and the low rate of vaccinations increase the uncertainty and, at a minimum, create a drag on these economies.