Hope for Yemen? Plus, three quick takes on the IMF’s outlook for Iran, Lebanon and Egypt

The UN-Saudi peace initiative may be the best hope in an otherwise gloomy regional forecast during "The Great Lockdown." 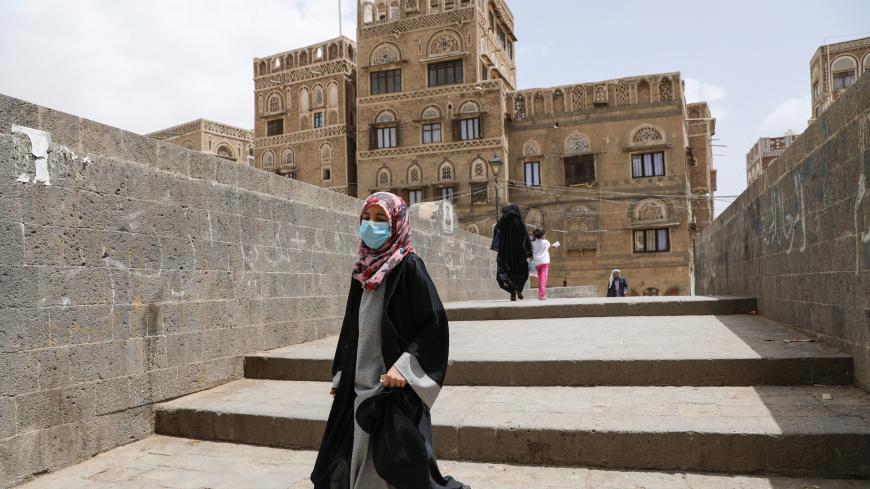 A girl wears a protective face mask amid fears of the spread of the coronavirus disease (COVID-19) in Sanaa, Yemen, March 17, 2020. - REUTERS/Khaled Abdullah

UN Yemen envoy Martin Griffiths told the Security Council this week that “an opportunity has emerged to bring peace to Yemen.”

On Friday, the UN Security Council threw its weight behind a UN-Saudi cease-fire that could give Yemen a chance for a respite from war to deal with floods, cholera, malnutrition and the emerging COVID-19 pandemic.

UN Secretary-General Antonio Guterres called for a global cease-fire March 23 to protect vulnerable populations in conflicts from the COVID-19 pandemic. A plea by the UN envoys for Yemen, Syria and Libya to take up Guterres' call in those war-torn countries followed.

The Saudi-led coalition’s cease-fire April 8 gave a pulse to the UN appeal. Griffiths thanked Saudi Crown Prince Mohammed bin Salman and described the cease-fire as “a clear sign of commitment to a peaceful, political solution to the conflict.”

Griffiths has been upbeat about his latest rounds of negotiations with the Yemeni parties, including Ansar Allah (Supporters of God), the so-called Houthi insurgent armed group backed by Iran. These negotiations are fragile, and Ansar Allah has its own competing players' agendas, including some in the movement who aspire toward a wider regional role, as Ali Hashem reports.

Last week we asked whether Iran would get behind Griffiths' effort. While Griffiths made no mention of Iran in his prepared remarks to the Security Council on Thursday, Gutteres spoke to Iran Foreign Minister Mohammad Javad Zarif twice last week about Yemen (and Afghanistan). According to the Iranian readout of the call, Zarif “expressed support” for the cease-fire as “a prelude for the launch of political process to resolve the crisis.”

Unlike in Libya and Syria, Russia has not been a party to the Yemen war. Moscow voted for the Security Council resolution and pledged “to continue to provide support to UN efforts.” Moscow and Tehran have been talking about Yemen. Zarif spoke with Russian Foreign Sergey Lavrov on the same day he spoke with Guterres. A Russian readout of the call said they “touched upon the prospects of stepping up settlement efforts in Yemen in the context of the UN’s latest proposals.”

We explained here why Yemen, the poorest Arab country, with a country of 28 million people, almost half under 15 years old, is too big to fail. It is among the highest of the high-risk states in the region because of the war, COVID-19 and a risk of collapse even before the present conflict. Torrential rainstorms have made miserable conditions for internally displaced Yemenis even worse, as Elizabeth Hagedorn reports. Yemenis have been ravaged by cholera since 2016, and the rains will likely make it worse. Since money will be tight amid the downturn in the global economy, as we describe below, massive assistance or some post-war Marshall Plan is at best aspirational, at least for now.

Despite the cease-fire there are still reports of fighting, as Rick Gladstone of The New York Times reports. The time is now for all parties, including Iran, to double down on Griffiths' efforts and back the Saudi-led coalition cease-fire. There is not a more impactful step to be taken at this time, and the stars are aligned. The Yemeni people deserve a break, and a long reprieve, from the war and its seemingly endless tragedies.

Middle Eastern and North African economies are projected to contract by 3.3% in 2020 as a result of the pandemic and drop in oil prices, according to the International Monetary Fund’s (IMF) annual World Economic Outlook, titled "The Great Lockdown," released this month.

The downturn follows lackluster 0.3% regional growth in 2019, and signals the unlikely prospect of massive assistance to states in fragile and conflict situations (FCS). Money, including Gulf money, will be tight as the region comes out of lockdown. A World Bank report released in February categorized Libya, Syria and Yemen (high intensity conflict), Iraq (medium intensity conflict), and Lebanon and West Bank/Gaza (high institutional and social fragility) as FCS states threatened by endemic instability and poverty, even before the pandemic.

The IMF projects a 4.2% expansion in 2021, assuming the pandemic fades, multinational coordination around policies of debt forgiveness and loan restructuring, and $36.40 a barrel for petroleum. We added the emphasis on assuming.

Here are three quick takes on the report:

Iran: Iran’s economy is projected to contract 6% in 2020, which would be a third consecutive annual downturn, following 5.4% (2018) and 7.6% (2019). More surprising was a projection of an estimated 3.1% growth spurt in 2021, despite no sign of a let-up in US sanctions. Presenting an alternative view to those expecting a collapse of the Iranian economy, Al-Monitor contributor Bijan Khajehpour suggests that 3.1% growth may actually be too low. “Annual growth is always calculated against the previous year,” he told me. “If all of these projections are right, then by March 2021, Iran's economy would have contracted by about 20% over three years. By then, most economists would conclude that the Iranian economy would not be able to contract any further, hence it will rebound.” You can read his analyses of the Iranian economy here.

Lebanon: Lebanon’s economy is among the hardest hit by the COVID-19 lockdown, expected to contract by 12% in 2020, after shrinking by 6.5% last year. The IMF offers no projection for 2021. The pandemic has compounded already dire economic conditions, including dwindling reserves and foreign investment, massive debt, and sinking currency value. The World Bank announced a $40 million loan this month to help Lebanon deal with COVID-19. As we reported here, since October Lebanon has dealt with widespread protests against government corruption, unemployment and poor services. Michal Kranz has the latest here on Lebanon’s response to the pandemic.

Egypt: The IMF projects 2% growth for Egypt in 2020 — the only country in the region that may experience an expansion this year. As the IMF fiscal year is July-June, Egypt’s strong 5.6% growth last year may explain why Egypt’s economy comes out ahead in the 2020 estimates, even as it is already dealing with the consequences of the pandemic. We have written here on the success of Egyptian President Abdel Fattah al-Sisi’s economic reforms. Nonetheless, Egypt, like other regional countries, is feeling the squeeze from the loss of tourism, remittances and foreign reserves. Check out the reporting by Ahmed Elleithy and Amira Sayed Ahmed.