Will Iran back UN-Saudi initiative for cease-fire in Yemen?

For Saudi Arabia and the Gulf, Yemen is too big to fail; for Iran, it’s a penny stock investment to keep the kingdom bogged down in a quagmire. 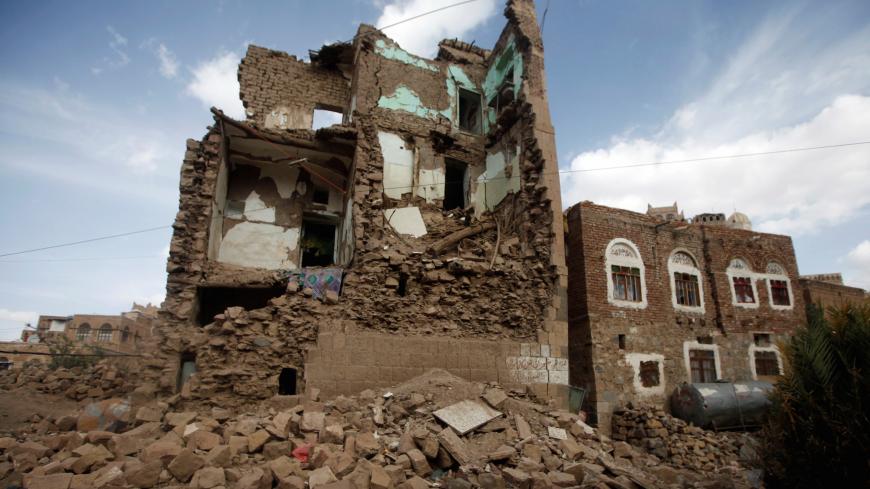 A destroyed house is seen at a site the Houthi authorities say was hit by a Saudi-led airstrike in the old quarter of Sanaa, Yemen Sept. 27, 2019. - REUTERS/Mohamed al-Sayaghi

The Saudi-led coalition fighting the insurgent Ansar Allah movement in Yemen announced a comprehensive cease-fire on April 9. The Saudi initiative complements both UN Secretary General Antonio Guterres’ call for a cease-fire in global conflicts in response to the COVID-19 pandemic and UN Yemen Envoy Martin Griffith’s latest diplomatic initiative toward a political solution. The 14-day freeze has the support of the Arab League and the Gulf Cooperation Council.

Ansar Allah (“followers of God”) is the Islamist political armed movement from North Yemen that began the war in 2014 by overrunning the capital of Sanaa. It is led by Abdul-Malik al-Houthi of the Houthi tribe, and is linked to the Zaidi branch of Shiite Islam. The Houthis, as the movement’s members are known, receive support from Iran.

Saudi Arabia and its allies, including the United Arab Emirates and other regional and Arab countries and with backing from the United States and other Western powers, intervened in an attempt to turn back the Houthi advance in March 2015. The war, which is now in its fifth year, has killed tens of thousands of Yemenis, in addition to Saudi, Emirati and other coalition casualties.

We know that past cease-fires in Yemen and Syria have often been false flags, producing minor lulls before even more brutal fighting. But this one, less than 24 hours in, has a different feel, maybe because it is wrapped around the imminent calamity of the novel coronavirus — something Yemen is not prepared to deal with.

While Yemen has just announced its first case of COVID-19, as Amerin Zaman reports, there are fears that the virus will spread quickly once it hits, especially given Yemen’s collapsed infrastructure in most of the war-torn country.

Yemen crisis may be even bigger than you think

For Saudi Arabia and the Gulf states, Yemen, the Arab world’s poorest country, is therefore too big to fail. A chronically failed state in Yemen would mean a peninsula and region in perpetual crisis — whether caused by war, terrorism, refugees, disease or all of the above.

To be sure, Yemen was a fragile and even failing state before the war. Ansar Allah got its start in 2014, organizing mass protests in response to a lifting of fuel subsidies as a condition for loans from the International Monetary Fund to stave off an economic crisis. Since then, as a result of the war, Yemen’s plight has gone from bad to catastrophic. In addition to the tens of thousands dead, 2.6 million Yemenis have been displaced and there are more than 280,000 refugees, according to the UN High Commissioner for Refugees. The country has faced waves of cholera and is a haven for al-Qaeda. The health and education systems have mostly collapsed. IMF staff, following a visit to Yemen last year, referred to the economy as “crippled” and said the country is in “a humanitarian crisis," explaining, "A sharp contraction in economic activity and hydrocarbon exports, along with a wide suspension of basic public services, have left some 17 million people in acute need of food aid and other forms of assistance.” That 17 million is now estimated to have grown to 24 million — a staggering 85% of Yemen’s population.

Yemen, Syria and Libya are what the World Bank has termed fragile states in high intensity conflict situations that risk endemic poverty and instability absent massive assistance. This assessment, which we wrote about last week, came about before the COVID-19 pandemic and drop in oil prices. In a recent policy brief, the UN Economic and Social Commission for Western Asia expects a massive increase in food insecurity and malnourishment, both already endemic to Yemen. The World Health Organization is calling for debt relief and the World Bank has announced $160 billion to protect vulnerable populations, rebuild businesses and support economic recovery efforts, to help mitigate the effects of the pandemic in these fragile states.

Of course, there will be no reconstruction, economic development or reform until the fighting stops.

The kingdom wants to end its endless war. Does Iran?

“I want to keep the pressure on all parties involved — including, by the way, the Iranians and the Houthis,” Smith said.

The catch here is that it was Riyadh that just took a giant step with the cease-fire. For Crown Prince Mohammad Bin Salman, the Yemen war needs resolution so he can focus on his economic and social reforms and remove an irritant in US-Saudi ties.

Despite some divergences in Saudi and Emirati policies, as explained by Samuel Ramani and Jonathan Fenton-Harvey, Riyadh and Abu Dhabi are in sync on a diplomatic push in Yemen. Along with the United Nations, the Arab League and the rest of the Gulf Cooperation Council, as well as the United States and key Western powers, the constellation on the side of negotiations right now is powerful, especially given the pandemic.

The spotlight, and pressure, should therefore shift to Iran. As of this writing there has been no official response from Tehran to the UN/Saudi initiatives, but the Houthis are so far reportedly skeptical.

Tehran, for its part, might take a signal from Abu Dhabi in seizing opportunity in crisis to build bridges and help neighbors in need. And Yemen can be that opportunity.

The UAE has sent medical supplies to Iran to help combat COVID-19 in the spirit of the Emirates' "founding humanitarian principles.” This initiative led to a phone call between Foreign Minister Mohammad Javad Zarif and UAE Foreign Minister Abdullah bin Zayed Al Nahyan, who reaffirmed “the UAE's support to the Iranian people as they come through this crisis” and “stressed the importance of collective work and efforts to survive such global challenges.” Iran Foreign Ministry spokesman S.A Mousavi tweeted that Iran “will never forget” that the UAE “stood with Iran in hard times.”

If Iran wants to build bridges and confidence, and do the right thing, it could get behind the UN initiative. Its strategic interests in Yemen are minimal; its intervention is instead all about low-cost aggression against the kingdom, a penny stock investment, with the Yemeni people paying a terrible price.

This is not to say that Iran necessarily has full control over Ansar Allah. Yemen’s crisis is firstly a Yemeni story. But Iran has lots of leverage, and it could and should use it to support a cease-fire. The UN and the COVID-19 crisis give it cover, if that’s what’s needed. The strategic payoff of such a goodwill gesture would likely be well received by the people of Yemen, tired of war, and in Riyadh, the region, the UN and maybe even Washington.