Reports this month by the IMF and the US intelligence community also underscore troubling trendlines. 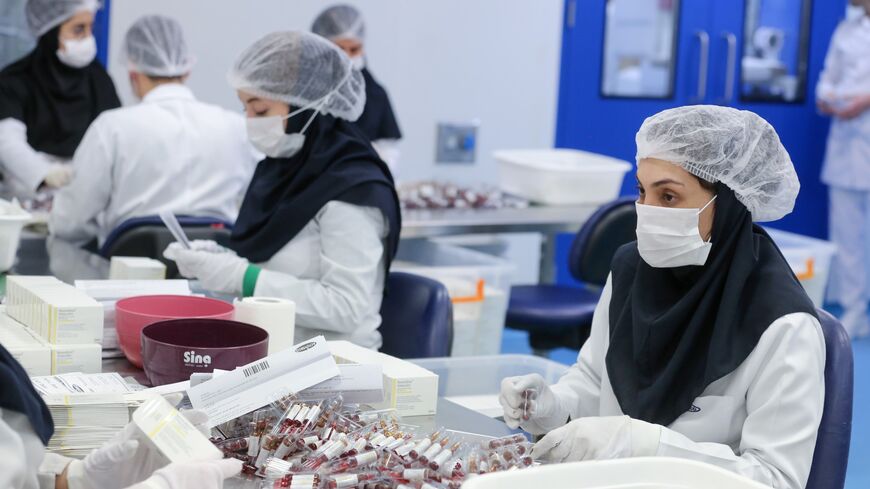 Iran's economy is expected to grow 2.5% this year. Here, pharmaceutical factory workers package vitamin and mineral supplement ampoules at the Actoverco plant in Karaj, about 40 kilometers (25 miles) west of Iran's capital, Tehran, on Feb. 18, 2020. Around 600 people run the Actoverco facility's production lines in an industrial suburb of Karaj. Actoverco, which also produces cancer drugs, is part of a family business established four decades ago that says it has about 4% of the Iranian pharmaceutical market. - ATTA KENARE/AFP via Getty Images

The latest World Economic Outlook from the International Monetary Fund (IMF), the Annual Threat Assessment of the US Intelligence Community, and Global Tends by the US Office of the Director of National Intelligence Council all came out this month.

Much of the analysis and projections are familiar. The threat analysis from the intelligence community focuses on familiar adversaries, including Iran, as we report here, as well as the Islamic State, al-Qaeda and Hezbollah, and warnings of endemic conflict in Syria and Libya.

But there are also some surprises in the economic trend lines that caught our eye regarding Egypt, Iran and Morocco.

A "long and divergent" recovery

Let’s start with the big picture.

The post-COVID regional economy will lag the global recovery, according to the IMF World Economic Outlook.

While the post-pandemic global recovery will diverge across countries and be marked by high uncertainty (an additional 95 million people fell below the poverty threshold last year), it will be even more divergent and uncertain in the Middle East.

The MENA region will be buoyed by increased vaccination numbers and an uptick in oil prices. But high oil prices are not a certainty. And given uneven vaccination rates across countries, widespread inoculation approaching herd immunity may not occur until late 2022 or even 2023, according to the IMF.

In addition to vaccinating their populations, the immediate priorities for post-COVID economies should be expanding social and public health infrastructure to mitigate the impact of the pandemic and future crisis, and doing so while pursuing reforms which create jobs, reduce poverty, attract foreign investment and reduce government debt.

The Gulf Cooperation Council (GCC) states are better placed to lead the recovery, given their relatively effective vaccination programs, smaller populations and financial and oil resources.

But even for the GCC, and especially for other MENA countries, the governance challenges are "daunting," according to the Global Trends report. Dealing with the impact of COVID-19 requires an expansion of social and public health services and spending. Meanwhile, there are even more young people out of work. And the demands of an expanded safety net clashes with austerity programs and tight budgets required to avoid runaway debt.

More broadly, the Annual Threat Assessment of the US Intelligence Community notes that throughout the region "domestic volatility will persist as popular discontent and socioeconomic grievances continue to rise … and its leaders struggle to meet public expectations for political and economic reform. … As a result, some states are likely to experience destabilizing conditions that may push them close to collapse."

Here are the surprises, which merit a second look.

Egypt and Iran were the only MENA countries to experience economic growth during the pandemic.

Egypt’s economy grew by 3.6% in 2020, and is projected to grow by 2.5% this year. This is especially surprising given Egypt’s reliance on "contact" industries such as tourism.

The success is noteworthy if fragile. As we noted in January, the IMF credited the government of President Abdel Fattah al-Sisi for undertaking "proactive measures" to address health and social needs to mitigate the impact of the virus. Egypt has also stayed the course on the IMF "stand-by arrangement" — a rigorous economic program that allows the country to have access to IMF funding.

The IMF is advising that Egypt build on this success to accelerate structural reform, reduce trade barriers and shrink the government footprint in the private sector as it pulls out of the pandemic.

Tobias Adrian, the director of the IMF's monetary and capital markets department, said while discussing the Global Financial Stability Report that for Egypt and similar emerging markets that "the stress on the corporate sector is higher, and that is particularly so in contact-intensive industries. Tourism, of course, has been hit extremely hard, but also entertainment, restaurants, are particularly adversely impacted by this crisis. The extent that countries can provide further fiscal support, that would certainly be helpful in order to bridge to the recovery and get economies back on track, including in the corporate sector." The Global Financial Stability report also was released this month.

Maybe the biggest surprise is that, despite economic sanctions imposed by the United States, a year of low oil prices and a disastrous response to COVID, Iran’s economy grew 1.5% in 2020 and is projected to grow 2.5% this year.

While noting that Iran shares "similar faultiness" with other MENA countries, Global Trends assesses that Iran "is better positioned demographically and has some economic and technological advantages, which may help it mitigate popular discontent."

Those advantages, according to the NIC, include "comparatively good governance, high education levels — including among Iranian women — and an economy that already has been forced to diversify away from fossil fuels under sanctions pressure. Iran has no sovereign debt, a manufacturing sector that could blossom if sanctions were lifted and a population that has largely passed the youth bulge that most Arab states are just entering, insulating it from some of the challenges other regional states are facing. If Iran can continue to provide the direct and indirect subsidies its populace demands, it can probably avoid regime-threatening protests."

The National Intelligence Council is more pessimistic on the political trendlines in Iran, however, noting that the potential for success for reformist leaders "is probably low," adding that "the rise of a new Supreme Leader with strong security ties could further entrench IRGC’s [Islamic Revolutionary Guards Corps] economic influence and dampen already limited prospects for the liberalization of Iran’s economy or politics."

Morocco: Ahead of the curve?

Although Morocco's economy contracted by 7% last year, its economic story is more complex, and somewhat promising.

Jihad Azour, IMF Director of the Middle East and Central Asia, singled out Morocco’s resilience in dealing not only with COVID-19 but also drought, and for implementing the most advanced vaccination program in the region outside of the Gulf.

"The Moroccan economy was one of the most dynamic and was able to adapt and to adjust facing constraints and opportunities," said Azour.

The IMF estimates Morocco’s growth this year at 4.5% — the fastest it’s projecting in the region.

As we wrote in January, "Egypt’s lessons are especially telling as Lebanon, Iraq and Sudan approach discussions about IMF assistance and reform. These programs often come with a heavy dose of austerity and subsidy reduction, which while necessary in the long run, in the short term increase the economic toll on populations already reeling from weak economies and the pandemic."