The Pentagon’s in-house intelligence agency says that China is cornering the market on armed drone sales to the Middle East as the United States is stifled by export rules. 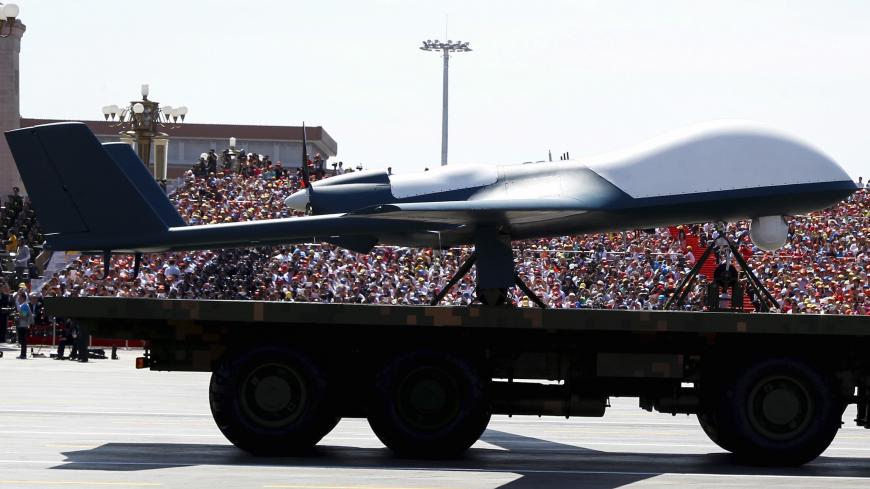 An unmanned aerial vehicle is presented during the military parade marking the 70th anniversary of the end of World War II, in Beijing, China, Sept. 3, 2015. - REUTERS/Rolex Dela Pena/Pool

China has gained an advantage in the market for armed drone sales to the Middle East as more stringent export restrictions have held back US sales, a Pentagon intelligence report revealed this week.

The Defense Intelligence Agency, the Pentagon’s in-house analysis unit, said that China’s total arms sales around the world totaled $20 billion between 2012 and 2016, as Beijing seeks to build bridges with countries in the Middle East and the Asia-Pacific region in its quest for new markets and natural resources.

“China is a niche supplier of armed UAVs [unmanned aerial vehicles] and has sold these systems to several countries in the Middle East, including Iraq, Saudi Arabia, Egypt and the United Arab Emirates,” said the Defense Intelligence Agency report released Tuesday. “China faces little competition” for the weapons, the report concludes, because it is not a member of international export control regimes that bind the United States and European arms makers. As a result, while Chinese arms are typically “considered to be of lower quality and reliability,” they come with fewer political strings attached, such as end-use agreements that prevent the retransfer of weapons.

San Diego-based General Atomics, for example, has not yet been able to sell its armed MQ-9 Reaper drone to Jordan and the United Arab Emirates. That sale had been championed by Republicans in Congress, including Rep. Duncan Hunter, R-Calif., who represents the district where the drone is manufactured.

Meanwhile, China has emerged as the primary driver of armed drone sales to the Middle East, even as President Donald Trump has championed reforms to US arms exports. Rejected for a Predator drone sale in 2015, Jordan has purchased two armed Chinese CH-4B Rainbow drones. Iraq and Saudi Arabia have also purchased similar systems.

It’s not clear how worried the Pentagon is about the Chinese exports’ potential impact on the long-reaching US military supply chain to the region. The Chinese drones would be difficult to integrate with US-made command-and-control systems, a report from the London-based Royal United Services Institute for Defense and Security Studies concluded last year.

It “does not look like the import of armed drones from China by countries in the region is driven by the desire to get more tied up in China’s military supply chain and less dependent on the US,” said Aniseh Tabrizi, a fellow at the London institute who authored the report. “On the contrary, relying on China for armed drones is seen as a second-best option, not a preferred one.”

In any event, Trump’s arms sales reforms to date have not removed the strong presumption of denial for selling systems over a weight of 500 kilograms (1,100 pounds) that can fly up to 300 kilometers (186 miles), though Defense News reported in April that the US administration sought to put in place rules to allow approval of some of them on a case-by-case basis. Current rules would potentially rule out the sale of a missile-carrying drone, such as the Predator XP denied to Jordan. As such, it’s not clear whether the White House, which has championed arms sales to Saudi Arabia and other Gulf countries as a major foreign policy accomplishment, will be satisfied with the current rules.

“I think you can say, looking forward, there's an open question whether the US transfers to these countries will increase given the Trump administration's desire to combat Chinese involvement in these areas,” said Shannon Dick, a research associate at the Washington-based Stimson Center.

Pressure is also increasing as the Pentagon sees China emerging as a major competitor to American interests around the world, including in the Red Sea port city of Djibouti, where two US airmen suffered minor injuries from lasers last year. “We now have to be able to look for a China, a Chinese military that is active everywhere,” a senior defense official said on Tuesday.

The report comes as traditional US partners in the region have made it clear they’re looking to extend their relationships with China, India and Europe. The White House also faces public fatigue over the US troop commitment to the region as the fights in Syria, Iraq and Afghanistan have continued into the third year of the Trump administration.