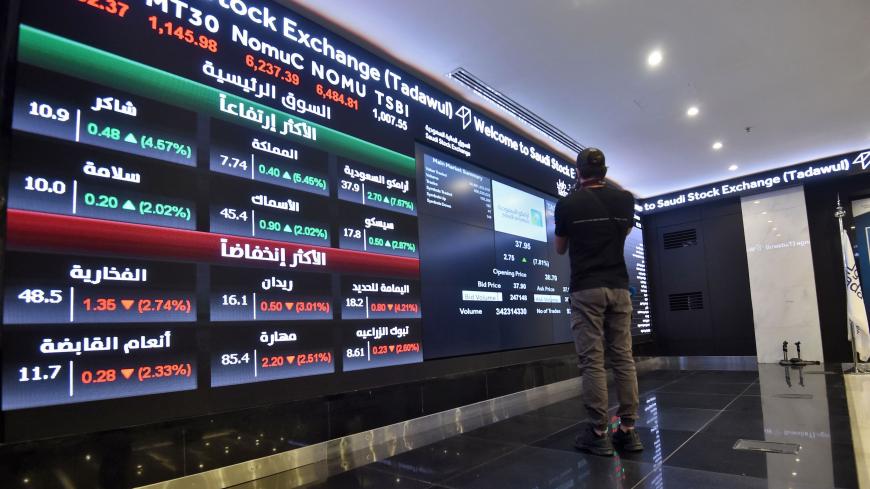 This picture taken Dec. 12, 2019, shows a view of the board at the Stock Exchange Market (Tadawul) in Riyadh. - FAYEZ NURELDINE/AFP via Getty Images

Recent diplomatic breakthroughs in the Gulf, specifically the normalization of ties with Israel and the lifting of the blockade of Qatar, have a common driver: the drying up of foreign direct investment across the region. The United Arab Emirates (UAE) and Bahrain normalized diplomatic relations with Israel as part of the Abraham Accords in September 2020, followed by Sudan and Morocco. Saudi Arabia orchestrated the easing of the long-standing rift with Qatar, along with Bahrain, the UAE and Egypt.

In the end, 2020 seems to have made a very powerful case for mending fences in the Gulf. Their revenue streams have been devastated by an oversupplied market, a global pandemic has stripped demand for oil, and there is a growing consensus that alternative energy is both a better investment and a political lightning rod. The only recourse is tighter fiscal policy, implementing new taxes and fees, borrowing, and attracting new investment.

For the UAE, Israel represents a sizable source of foreign investment, technology access, and a new set of tourists and property buyers. Fifty-thousand Israelis reportedly have visited the UAE since the signing of the Abraham Accords. Forgiving Qatar means that Saudi Arabia is eager for tourists and investors, especially if they can drive over a land border.

In April 2020, PwC estimated that 400,000 jobs in the tourism sector of the Gulf Cooperation Council (GCC) region could be lost to the pandemic; for the broader Middle East, the job losses in the tourism sector could reach over 3 million. Saudi Arabia's hosting of the GCC summit in al-Ula, the site of a Nabatean archaeological wonder and the literal poster of Saudi tourism aspirations, created a leadership moment for Crown Prince Mohammed bin Salman to call for unity, and to signal to his critics that he is focused on the economic challenges of the future, not the foreign policy adventurism of the last five years.

They did it for the money. It's not the only reason, but it is a compelling one. Politics in Washington are certainly relevant — whether to placate outgoing President Donald Trump and establish ties with Israel, or an effort to curry favor with the incoming Joe Biden administration by putting an end to the Gulf dispute. But the general sense of the future of the Gulf is that while the region is influenced by events and power shifts in Washington, it is now more responsible for its own security, reputation and investment climate. New Gulf diplomacy is not doing Washington's bidding but taking charge of its own affairs.

The UN Economic Commission for West Asia estimates find Arab states are likely to lose 45% of FDI (foreign direct investment) inflows in 2020. Intra-GCC FDI has been especially difficult since 2017 and the blockade of Qatar. GCC visitors accounted for more than 50% of arrivals in Qatar before 2017. Qatar suffered for its dependence on foreign deposits in the local bank sector during the blockade, which the government stepped in to replace. Large project spending, much of it due to completed awards for the 2022 World Cup, is expected to decline sharply in 2021 — as much as 20%, according to the Qatar Ministry of Finance and the International Monetary Fund.

Qatar clearly needed the blockade to ease, but the advantages go more to Saudi Arabia and the UAE. Having Qatar in the fold, available to contribute to shared GCC objectives like developing a regional infrastructure and market for electricity-sharing as well as providing fiscal support to weaker economies, is a priority. An important side-effect of the easing of the blockade will be Qatari citizens traveling to the UAE and Saudi Arabia for business and pleasure.

2020 marked a disastrous year for global FDI, with UNCTAD estimates of a 49% decline in the first half of the year. China was on the receiving end of FDI more than it deployed. For the Middle East, China has all but exited the region as a source of FDI. According to AEI's China Global Investment Tracker, there was no Chinese FDI into the UAE or Saudi Arabia, and contract awards amounted to 8% of 2019 awards in the first half of 2020.

Moreover, China's foreign investment flows into Pakistan and Egypt, while strong in 2019, evaporated in 2020. But so too has outgoing FDI from the Gulf to the Middle East, Pakistan and the Horn of Africa. 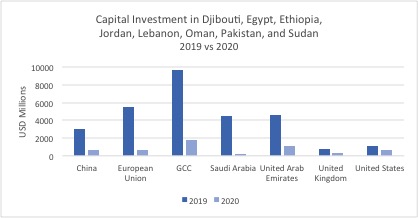 The Gulf Financial Aid and Direct Investment (FADI) Tracker lists FDI from the six GCC states to eight recipient states across the Middle East and the Horn of Africa (Lebanon, Jordan, Pakistan, Oman, Djibouti, Sudan, Ethiopia and Egypt). 2020 saw sharp declines in Gulf FDI to these cases compared with 2019. There was one exception: Oman. Of the eight cases, only Oman saw continued and increased incoming FDI from the GCC, almost entirely driven by the UAE. FDI to Oman from other sources, including China, the European Union, the United States and other Gulf states, declined sharply from 2019 to 2020. Egypt, Ethiopia and Jordan saw substantial declines in FDI from the GCC states. 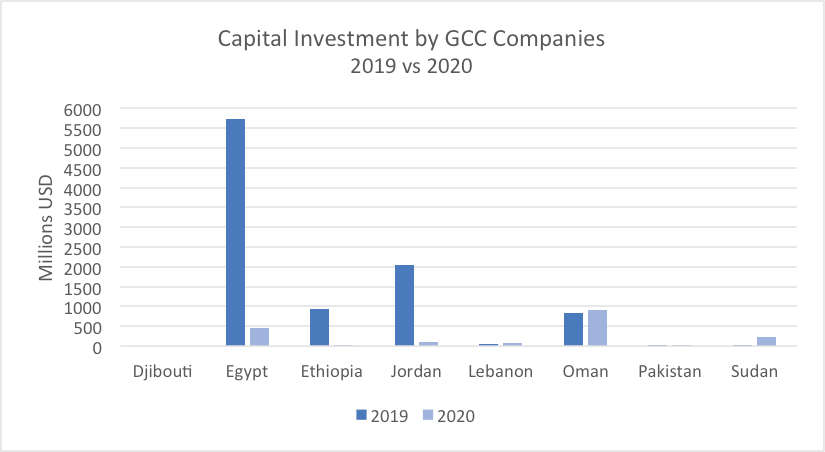 For 2021, we should expect that diplomatic efforts will try and lower the temperature of political conflict in the Gulf, including with Iran. But there will be increasing competition between the Gulf Arab states for foreign investment. At least there will also be the opportunity to share profit from the success of neighbors. Expect more shared interest in tourism events such as the 2022 World Cup, along with common infrastructure projects, property development and technology platforms.