Gulf state support to Egypt — whether through official aid, central bank deposits or capital investment flows — has not been consistent in the past, so will investments and aid help Egypt through a coronavirus-induced recession? 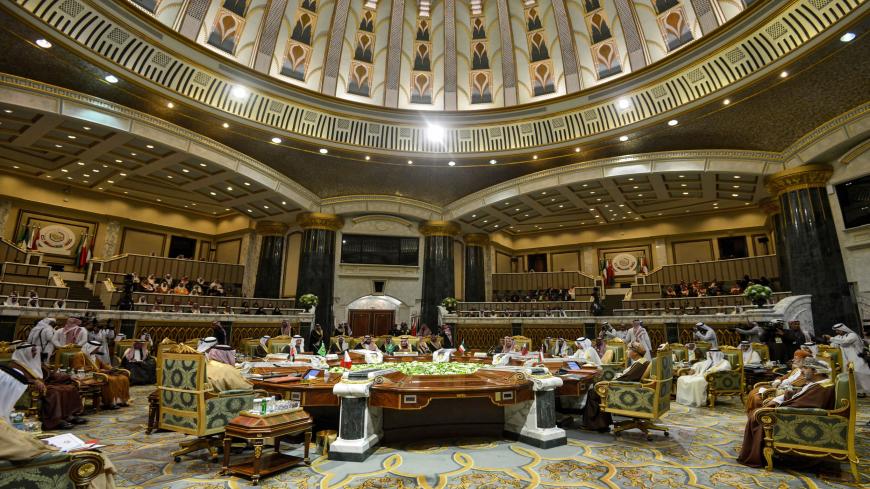 This picture shows a general view of a session of the Gulf Cooperation Council summit held in Riyadh, Saudi Arabia, Dec. 10, 2019. - FAYEZ NURELDINE/AFP via Getty Images

Whether they want it or not, the Gulf states now play a vital and pervasive role as investors across the Middle East. As the Gulf states themselves are dominant in investment vehicles — rather than private outflows — foreign policy and economic interests are bound to collide.

Intra-Gulf conflicts affect investment flows within the region. Their fiscal vulnerabilities and pro-cyclical domestic economic growth tied to oil prices will continue to affect their ability to create growth abroad. And their political interests will create priorities abroad for both foreign investment flows as well as aid and financial intervention in the form of central bank deposits. With the coronavirus pandemic, political collapse in places like Yemen and Lebanon, and weak domestic demand at home, there is good reason to fear a lapse in investment outflows and remittance flows from the Gulf to the wider Middle East.

There is a growing consensus among economists and those who study emerging markets that we are facing a major economic recession in which poorer countries will be ill-equipped for recovery. The World Bank has revised its April projection to now expect that, as a baseline, more than 70 million people will be pushed into extreme poverty (measured as living on $1.90 per day) to a downside projection of up to 100 million people moving into extreme poverty as a result of a coronavirus-induced global recession. In a new article for Foreign Affairs, economists Carmen Reinhart and Vincent Reinhart predict a disproportionate burden on developing economies from lost investment, accelerating debt crises and a lack of fiscal capacity to support stimulus measures to already weak private sectors with already difficult tasks to create jobs for their young populations.

In the case of Egypt, we find a bellwether of sorts in the region. Despite its challenges, Egypt is a consistent destination for foreign investment within the Middle East. Its large consumer market, its appetite for mega-contracting projects in real estate and infrastructure, its active local equity exchange, the Egyptian Exchange, and its strategic location have made it a traditional hub for regional investment flows. If things are bad in Egypt, you can expect them to be worse elsewhere across Middle East markets.

Egypt has secured a 12-month standby arrangement International Monetary Fund support package worth $5.2 billion. The government continues to issue sovereign debt, including a $5 billion bond in May. But, like other emerging markets, Egypt saw portfolio inflows decline sharply between March and May this year, with foreign holdings of treasury bills declining by $13 billion. Tensions with Libya and with Ethiopia have not improved the investor outlook. And like many other developing countries, the burden of debt repayment will compete with other fiscal priorities to come. Egypt's budget deficit was $24.3 billion (389 billion Egyptian pounds) over the first 11 months of fiscal year 2020 (ending 30 June) and spending is dominated by debt repayment, which stood at 440 billion pounds over the same period. Debt repayment during fiscal 2020 was more than what the government spent on public sector wages and capital projects combined, according to analysis by HSBC. Interest payments alone accounted for more than 75% of tax revenues in fiscal 2020, also according to HSBC analysts. And as Egypt benefits from the central bank dollar deposits of Gulf states, the ability to roll over or extend as much as $9.3 billion in deposits — expired between April and July 2020, according to Byblos Bank reports — is essential to support the Egyptian pound. 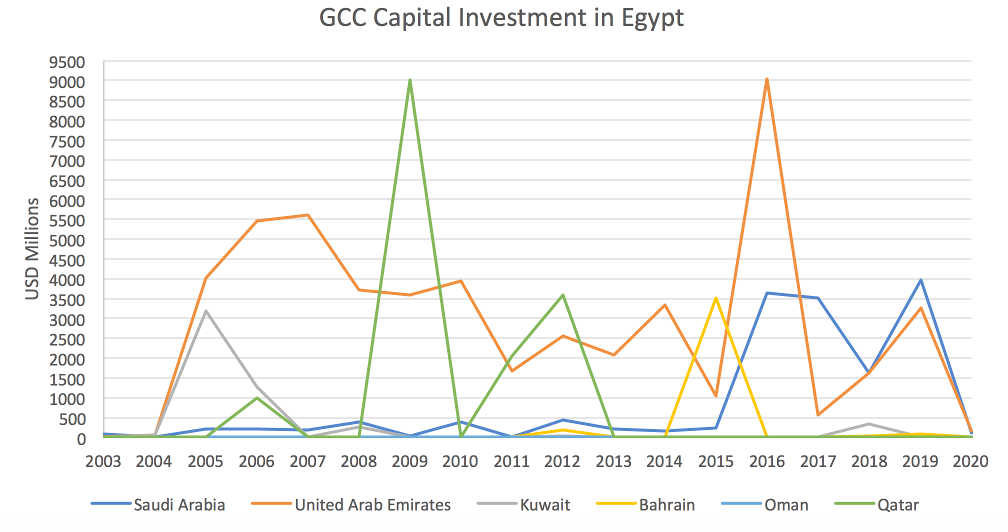 Moreover, we need to see the influx of Gulf capital to its surrounding sphere of influence as a major source of international investment and support, but operating within a universe of competing factors between forms of state capitalism and market capitalism. In the coronavirus-induced economic crisis to come, the kinds of capital available to developing countries will have institutional and political consequences, something Egypt likely already appreciates. The role of Chinese investment is a particularly tricky one, as the government and its media outlets are quick to advertise their investments when private capital usually goes without a flag or calling card. 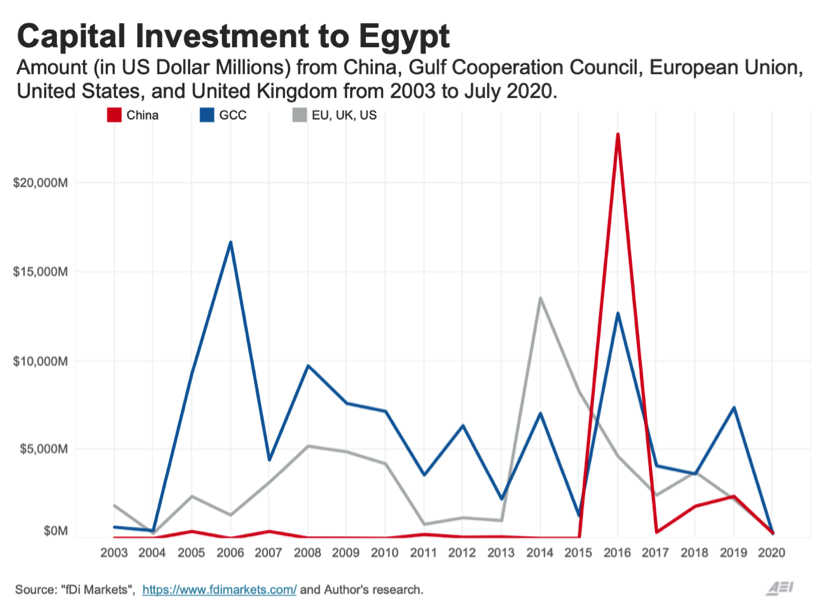 My research on Gulf investment and financial intervention compared with combined capital investment flows from the United States, the United Kingdom and the European Union and then China shows how perceptions of development and investment partners do not always match the reality of flows. There is also the important after effect of job creation from capital investment. Here we especially see how the perception of one large capital injection or spike in investment does not necessarily translate to longer term growth or job creation in the recipient country. 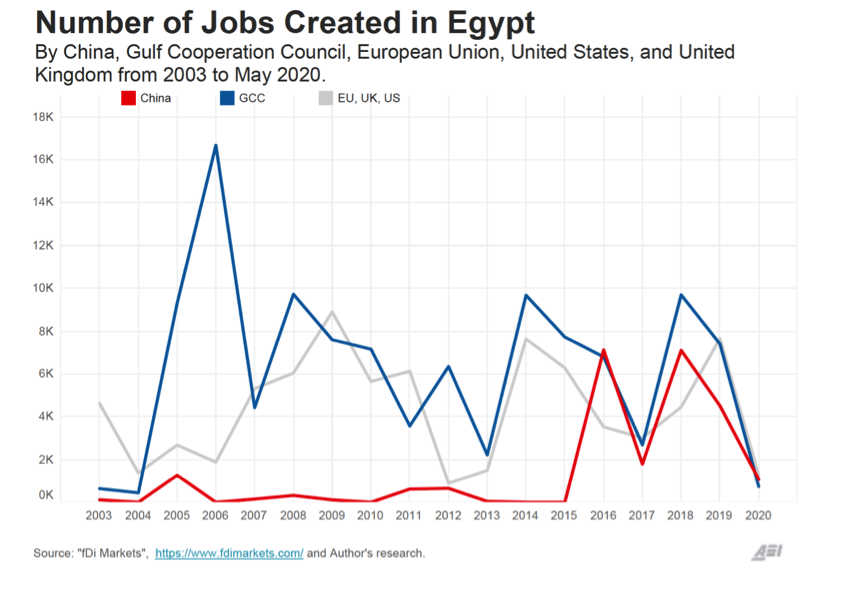 The Gulf states are consistent sources of both capital and job creation in Egypt, competing with the largest economies and investment sources globally. GCC states and their capital investments — from state and private entities — were responsible for more job creation in Egypt between 2003 and 2020 than both China and combined capital investment efforts from the Untied States, the United Kingdom and the EU. The ability to continue that role will depend on how sharply oil prices limit the fiscal budget priorities of the Gulf states and their own ability to create domestic economic growth. Political commitments to Egypt, particularly from the United Arab Emirates and Saudi Arabia, have been strong, but not without their limits.

The convergence of a coronavirus-induced recession and a slowdown for oil exporters in the Gulf will be especially trying for emerging market economies dependent on regional capital flows and investment. Egypt has been caught in the middle of intra-Gulf disputes before, but the kinds of investment and access to capital needed in the next year or so will dwarf the challenges of the post-2011 era. Moreover, Egypt will compete with any number of other emerging market destinations for its debt issuance, and for multilateral lending and aid. The Gulf states may not be willing or able to come to the rescue.