The forecast for growth across the Middle East and North Africa is bleak. Unfortunately for the regions, heavy debt appears to be one way out. 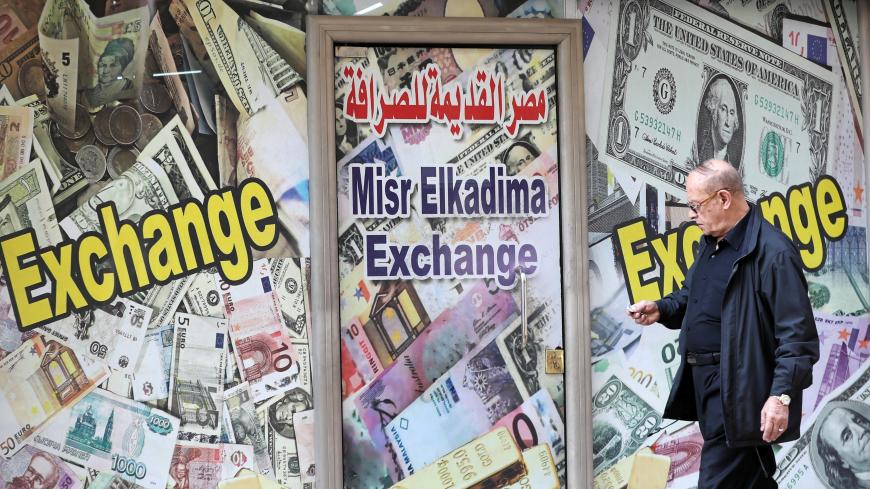 A man walks past a currency exchange bureau advertisement showing images of the US dollar and other currencies in Cairo, Egypt, April 2, 2019. - REUTERS/Mohamed Abd El Ghany

The International Monetary Fund (IMF) and World Bank Group spring meetings begin this week in Washington. As finance ministers and economic policy teams enjoy the cherry blossoms, the forecast for growth in the Middle East and North Africa looks more like winter. Real gross domestic product (GDP) growth across the Middle East and North Africa regions is expected to average 1.5% in 2019. Growth prospects are low, tied to low growth in the United States and Europe. There are pockets of higher growth inside the region, notably in places where reforms are underway — or the bounce back from war or bleaker times has begun. Where there are bright spots says a lot about the outlook for the region as a whole. For example, "notable expansions" are expected in Yemen and Iraq in 2019, according to the World Bank.

In Egypt, for example, the return of its tourism sector has been as important as new taxes and reduced subsidies as a boost to government revenue. Egypt has made some difficult reforms — with a very heavy hand and a cost to human capital — setting an example to the region wary of public reaction to structural reform. As conditions of Egypt’s IMF program, local fuel prices will be indexed to global ones and most energy subsidies will be eliminated by mid-2019. But Egypt has been rewarded already with praise from the World Bank and with its new status as the only country in the Middle East with higher expected growth in 2019 (at 5.5%) than its respective trend from 2011-2016, according to research by Standard Chartered.

But if Egypt is the best-case scenario of reform implementation (and not all analysts agree on its early success), there is clearly a regional dilemma. Breaking down the distortions in political economies of the region is fraught with political risk, but what has been accessible is debt. And there has been a surge in sovereign bond issues and loans, both commercial and multilateral, over the past four years.

In its new Regional Outlook, the World Bank warns that structural reforms have urgency — this to a region addicted to recycled petrodollars as a source of capital, inefficient subsidies of energy and water, and bloated and unproductive public sector workforces. So the World Bank suggests a "Moonshot" strategy to invest in digital economies and workforce productivity, especially for young people. The demographics of the region have impeded job creation for young people who have had good educational opportunities but few chances at climbing a career ladder, especially in private companies. To embrace subsidy reform and digitization are good ideas, but it will be hard to reach the moon when the medium term will be weighed down by debt.

Lebanon's debt to GDP ratio is around 151%. Jordan is also struggling. Jordan's agreement with the IMF, reached in February, marked the conclusion of the second review of Jordan’s $723 million Extended Fund Facility and came after parliament passed a politically difficult tax law. The terms of the IMF agreement also target reducing the public debt burden to 77% of the GDP by 2021 from 94% currently.

It's not just the oil importers who have been on a debt binge to finance government spending. It is the expansion of debt issuance from oil exporters in the Gulf Cooperation Council (GCC) that is shifting the composition of emerging market sovereign debt globally. This debt is now more frequently traded as it becomes included in passive bond index flows. The staggered inclusion over nine months of GCC sovereign and quasi-sovereign debt in the JPMorgan EMBI series began this year. When the process is complete, GCC sovereign debt is expected to represent 12 to 14% of the index.

Bahrain and Oman are most vulnerable, as they lack the foreign reserve assets that their GCC peers can rely on in addition to plentiful debt issuance to meet their fiscal deficits and large spending commitments. They are now heavily indebted, with Bahrain's debt to GDP at over 90%, and Oman at 58% of the GDP.

Borrowing is an easy way out in the short term. Some Gulf oil exporters built substantial foreign reserve assets in the time of high oil prices of the 2000s. But even Saudi Arabia, with its massive sovereign wealth fund and government deposits of foreign reserve assets in the central bank, has a high burn rate. At its current spending levels and without access to debt issuance, Saudi Arabia would have just about seven years of wealth stored away in its Public Investment Fund and deposits with the central bank to cover its current and projected recurring fiscal deficit needs, according to research by HSBC. Qatar and the United Arab Emirates have 75 and 85 years, respectively, of current fiscal deficit coverage needs in reserves, respectively.

For now, debt is the preferred policy fix to enable continued spending. For those governments with more conditional loans from multilateral lenders, their reform agendas will face difficult domestic political hurdles. For those oil exporters able to access easy credit now, the more difficult fiscal policy choices are only a few years away. Some will face greater fiscal tradeoffs than others, though all will have to reckon with the inevitability of repayment. It is very possible that the low-yield, easy-to-come-by financing of today becomes much more expensive in the future. It is time for a moonshot, indeed.