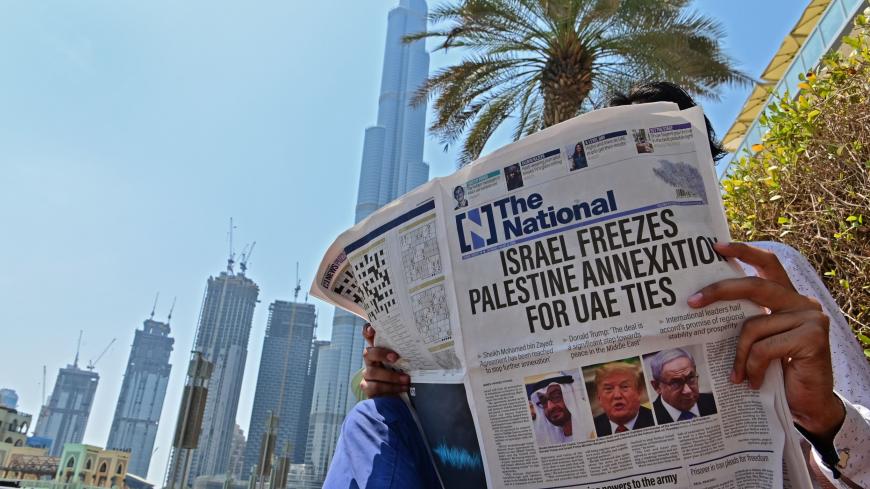 A man reads a copy of the United Arab Emirates-based The National newspaper near the Burj Khalifa, the tallest structure and building in the world since 2009, in the Gulf emirate of Dubai on Aug. 14, 2020, as the publication's headline reflects the previous day's news that Israel and the UAE had agreed to normalize relations in a landmark US-brokered deal. - GIUSEPPE CACACE/AFP via Getty Images

You can’t undersell the UAE-Israel deal

US President Donald Trump said the UAE-Israel deal was "huge,” and he nailed it.

The agreement between the United Arab Emirates and Israel is indeed a diplomatic breakthrough and credit rightly goes to Trump and his team.

All that comes next will flow through Washington and the White House. King Abdullah of Jordan can exhale, as annexation is off the agenda, the condition of Abu Dhabi’s signing up. Turkish President Recep Tayyip Erdogan, a bystander on Israeli-Arab matters, chimed in that he might suspend Turkey’s ties with the UAE in solidarity with the Palestinians (Pinar Tremblay has the background here on the Turkey-UAE "cold war"). Iran, which has had a warming trend in ties with UAE, slammed the move as "stupid."

Other Gulf states may follow the UAE lead at some point. Bahrain and Oman are the most likely candidates, and according to Israeli media reports, similar agreements are already in the works. Bahrain hosted the administration’s "Peace to Prosperity" workshop last year, and Oman today released a statement that the UAE deal fulfills “the aspirations of the peoples in the region in sustaining pillars of security and stability."

Israel had trade representative offices in Oman and Qatar in the 1990s, but these were shut down during the second intifada in 2000.

Contacts between Israeli and Gulf officials have been an open secret for some time.

“It's not a secret that in the last few years, we worked with many moderate Arab countries in the region,” Danny Danon, Israel’s ambassador and permanent representative to the UN, said in an exclusive interview with Al-Monitor in September 2019. “And what's happening recently, when we see the aggression coming from Iran, we hear they are more open to collaborate with us, even more publicly. … So we are collaborating. We are cooperating.”

At the core of the deal was Israeli Prime Minister Benjamin Netanyahu’s commitment to put off his plan to extend sovereignty to the Jewish settlements in the West Bank in return for formal relations with the UAE.

Yousef al-Otaiba, UAE minister of state and ambassador to the United States, told Al-Monitor in June that annexation would make the Middle East “even more unstable,” and “put an incredible amount of political pressure on our friends in Jordan.”

Ben Caspit reports from Israel that the reaction to the deal was “mixed,” with the dissenters being Netanyahu’s right wing and settler supporters, who wanted annexation to be the prime minister’s "legacy" issue.

“The breakthrough was not the achievement to which he aspired,” writes Caspit. “What he — and his voters — really wanted was to implement historic Israeli sovereignty over a significant part of the West Bank. That will no longer happen. The agreement with the UAE is a candy to dispel spreading bitterness, a pain relief tablet to ease the hangover plaguing Netanyahu’s electoral base since the heady White House event in late January at which the upcoming annexation was declared.”

Palestinian officials responded with anger to the announcement. Palestinian President Mahmoud Abbas is already playing a weak diplomatic hand, and it just got weaker.

Nabil Shaath, a senior adviser to Abbas, told Daoud Kuttab that the tripartite US-UAE-Israel agreement “is a crime by the UAE against Palestinians.”

Shaath added that there is "no justification for the action of the sons of the late Sheikh Zayed, who was genuinely committed to the Palestinian cause.”

Egypt as bellwether for Gulf investment

Until the COVID-19 pandemic, Egypt had been mostly an IMF success story, with improvements in GDP growth, employment, and debt ratios. Because of its success since 2016, Egypt was the only country in the Middle East and North Africa region anticipating 2% GDP growth this year. The IMF approved a 12-month stand-by arrangement worth $5.2 billion this summer to help address the economic impacts of COVID-19.

Karen Young defines Egypt as a “bellwether of sorts in the region” for Gulf investment.

“Despite its challenges, Egypt is a consistent destination for foreign investment within the Middle East,” she writes. “Its large consumer market, its appetite for mega-contracting projects in real estate and infrastructure, its active local equity exchange, the Egyptian Exchange, and its strategic location have made it a traditional hub for regional investment flows. If things are bad in Egypt, you can expect them to be worse elsewhere across Middle East markets.”

The states of the Gulf Cooperation Council (GCC) have been Egypt’s main sources of capital and job creation over the past decade, but it is unclear if that trend will continue, given the impact of the coronavirus.

“Egypt has been caught in the middle of intra-Gulf disputes before,” Young concludes, “but the kinds of investment and access to capital needed in the next year or so will dwarf the challenges of the post-2011 era. Moreover, Egypt will compete with any number of other emerging market destinations for its debt issuance, and for multilateral lending and aid. The Gulf states may not be willing or able to come to the rescue.”

Are migrant workers getting stiffed?

“The double blow of low oil prices and the coronavirus crisis has already pushed over half a million migrant workers out of Arab Gulf states,” writes Sebastian Castelier.

“Returned to their countries of origin in haste, migrant workers whose wages have not been paid are unable to defend their rights in the Gulf’s courts of justice,” Castelier reports. “Their embassies have come under criticism for largely refusing to document grievances before repatriation.”

He said none of the six GCC countries have ratified the International Labor Organization’s Protection of Wages Convention, "which provides that 'wages shall be paid regularly.' Furthermore, most Gulf legal frameworks deny workers the right to union representation and prevent collective complaints, leaving workers alone to navigate justice mechanisms.”