Israeli officials told the local press they are in talks with Oman to reach a similar normalization in ties. 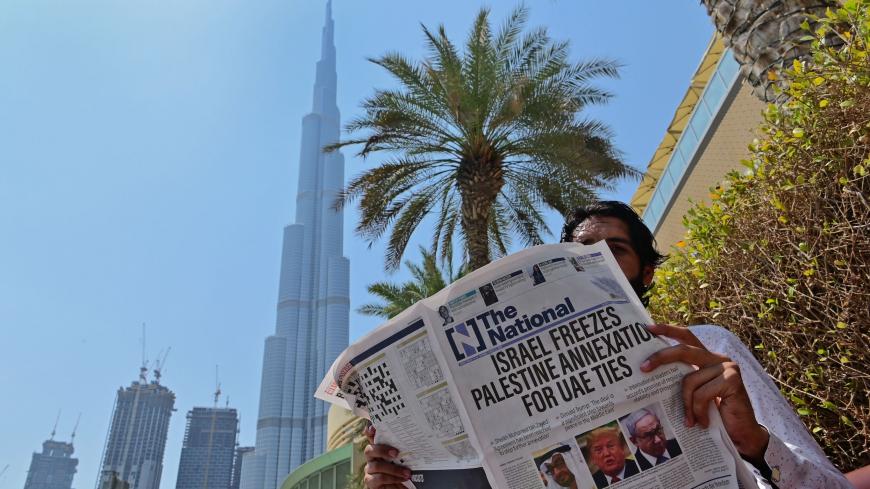 A man reads a copy of UAE-based newspaper The National near the Burj Khalifa in the gulf emirate of Dubai on Aug. 14, 2020, as the publication's headline reflects the previous day's news that Israel and the UAE agreed to normalize relations in a landmark US-brokered deal. - GIUSEPPE CACACE/AFP via Getty Images

Oman welcomed the historic normalization of ties between the United Arab Emirates and Israel amid growing signs the Gulf state could be eyeing a similar pact.

A Ministry of Foreign Affairs statement carried by the state-run Oman News Agency said the new accord will “fulfill the aspirations of the peoples in the region in sustaining pillars of security and stability."

Israel and the UAE announced their agreement in a joint statement with the White House on Thursday. As part of the deal, Israel has agreed to temporarily suspend plans to annex large portions of the West Bank in exchange for cooperation with the Emiratis on investment, tourism, direct flights and other areas. The two countries will also set up reciprocal embassies.

The UAE is now the third country, after Egypt in 1979 and Jordan in 1994, to normalize relations with Israel. Oman has had no formal ties with the Jewish state but enjoyed a brief period of rapprochement in the mid-90s.

Today, Oman remains a strong supporter of the Palestinian cause, and in a first for a Gulf Arab state, announced plans to open an embassy in the West Bank city of Ramallah last year. But the new US-brokered agreement, seen among Palestinians as a betrayal by the UAE, earned Omani praise amid growing talk that the Gulf state will be among the next to normalize ties with Israel.

During his announcement Thursday, Trump said the “ice has been broken,” allowing other countries in the region to follow the UAEs’ lead in normalizing relations with Israel. Israeli officials have told the Israeli press that they are in talks with Oman as well as Bahrain about similar agreements.

"Things are happening that I can't talk about, but they’re extremely positive," Trump said Thursday.

Signs the countries are growing closer include Prime Minister Benjamin Netanyahu’s October 2018 surprise trip to Muscat to meet with the late Sultan Qaboos Bin Said in what Israel framed as "deepening relations with the states of the region.” Not since 1996 had an Israeli premier visited the sultanate.

Shortly after Netanyahu’s landmark visit, Israel’s flagship carrier, El Al, was granted permission to fly into Omani airspace. Asked about the potential for formal ties with Israel, bin Alawi told Al-Monitor in September 2019 that “everything is on the table.”