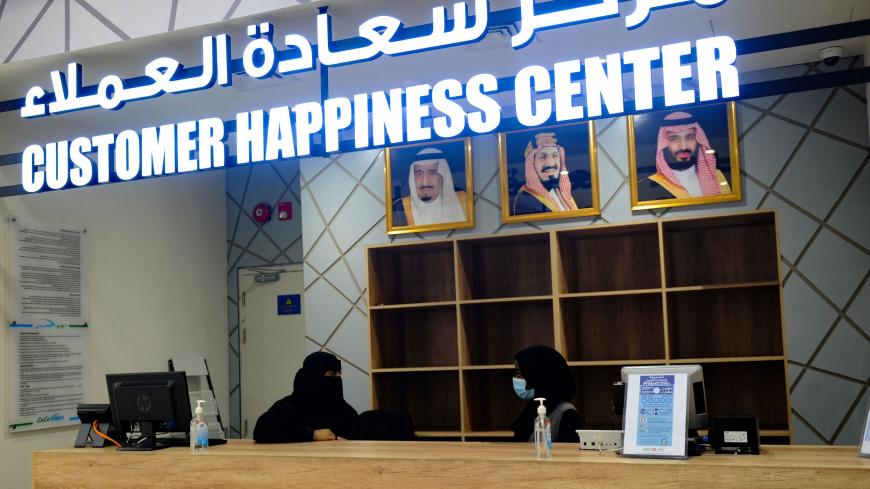 Saudi women work at the customers service desk at a hypermarket, newly launched by the operator LuLu and run by a team of women, in the Saudi Arabian port city of Jeddah, on Feb. 21, 2021. - AMER HILABI/AFP via Getty Images

Like many countries across emerging markets, the plan for economic recovery from the COVID-19 pandemic in Saudi Arabia relies on government outlays in social support and public health, a renewed effort to attract foreign direct investment, access to international debt capital markets and some serious fiscal consolidation. In many ways, though, the economic policy response to COVID-19 is an acceleration of specific trends already underway across the GCC. The policy shifts we saw in 2020 are really a continuation of the shifts that began in 2015 with the decline in oil prices. What is new is more differentiation between Gulf Cooperation Council state approaches that now lead to a competitive economic policy landscape. This is a broader effect of an energy inflection point in the global economy: plentiful oil supply, less oil demand, more competitive renewable energy options and a more discerning investor and consumer of carbon-intensive products.

The COVID-19 pandemic is just speeding things along, and we see now a wider aperture across the GCC on tax policy, labor market regulation and immigration policy. The pandemic has also made the economic diversification policies that were innovative all the more difficult to execute in the past year. Projects in tourism, airlines and entertainment, along with investment in private schooling and destination or megacities could not accelerate as planned. And for Saudi Arabia, these are precisely the areas the government is targeting for growth. While the megaprojects elicit critiques for their tech-obsessed grandeur, the easier target of a growing market for private education of a youthful population has been slowed down by the pandemic. Saudi private schools are expected to increase to 25% of the total K-12 school offerings by 2030, from 17% currently. For early education, the Saudi market is poised to grow with current enrollment rates of kindergarten students at only about 15%. While the expansion of private schools is a target of investment and private sector growth with excellent potential, the growth trajectory was dealt a blow from the pandemic. One estimate is that 45% of private school students retreated to public options (that are free of charge) when in-person schooling became impossible and to parents, not worth the expense.

Resilience in the GCC economies has also been weak in unsurprising ways, particularly across job creation and employment. Labor markets are still contentious across the GCC because of the persistent demographic divide between foreigners and citizens. Citizenship rights and a shared understanding of the social contract continue to define the economic possibilities of Gulf political economies.

So, looking at the policy response since March 2020, four areas of policy contention stand out. The Gulf Economic Policy Tracker at AEI provides a database of reforms and economic policy initiatives since 2015, including designations in the dataset for COVID-related policies.

Lockdown rules created in March 2020 set the tone of the outsider vs. citizen debate going forward

Interestingly, these policies showed more cohesion and synchronicity for the GCC as all six states enacted similar travel bans between March 14 and March 18. The state's ability to limit the mobility of foreigners and to cancel the work visas of those who chose to leave established a clear signal of the fungibility of foreign workers. Friendliness or openness to foreign laborers and their families will be a key point of differentiation among GCC states in the economic recovery to come. All have demonstrated an extensive capacity to regulate the size and status of this population.

Saudi Arabia pushed forward on limiting certain sectors to hiring nationals only. Starting in January 2020, pharmacies were limited to hiring nationals, then ride-share firms in March, followed by a wider retail segment to protect jobs for nationals in coffee and tea shops, toy stores, bookstores and cleaning supply stores in August.

Compared with ongoing and stringent efforts in Oman to nationalize the workforce by limiting over 90 job categories to citizens over the past two years, Saudi Arabia may be cautioned by some of the distortive effects already showing in the Omani economy. Oman has pushed farthest in the GCC in mandatory retirement of public sector workers after 25 years of service, an effort to create openings for younger (and lower salaried) citizens. For example, in April 2020, the Omani government had to relax its own nationalization efforts to allow small and medium-sized businesses to hire foreign workers for contract work. The disconnect on vocational training for roles like plumbers, electricians and carpenters demonstrates how the supply of citizens ready for these jobs does not match open opportunities when foreigners are excluded.

Wage support, worker compensation and contractual flexibility were not strong in 2020

Employers received the most benefit from new policies that allowed flexibility in ending contracts or cutting salaries, such that if a worker did not agree there was little or no recourse or job protection. There is no standard unemployment benefit in Saudi Arabia, though there are two new programs for wage support or direct transfers. One, the Citizens Account, was established before COVID-19 as a mechanism within the Vision 2030 plan to ease fuel and utility price rationalization. The SANED program, announced in 2020, is a temporary measure to support citizen workers in the private sector. SANED is intended for citizens in the private sector as a temporary unemployment support to cover 60% of lost wages. In April 2020, the Saudi authorities allowed private sector firms to cut employee wages by 40% for six months. At the same time, about two million Saudis were removed from coverage under the new Citizens Account program. Migrant women are probably the least protected group of workers in Saudi Arabia, particularly those in household employment.

The government relaxed some lending requirements and support to SMEs rather than providing employment or wage support, and certainly did not extend those measures beyond citizens. The effect is a disproportionate benefit to wealthier citizens, business owners and those with better access to banking and financial services.

Fiscal outlays and stimulus in Saudi Arabia and across the GCC are weak when compared globally. Bank liquidity has increased, but not so much in direct financial support to workers or families. A December 2020 IMF report argues, "Overall, while monetary easing … in the GCC has exceeded the global average, the aggregate fiscal response has been smaller than in many other regions. This can be attributed to the already large size of government spending as a share of the non-oil economy in the GCC and because the majority of GCC nationals work in the public sector where there have not been job losses."

The outcomes of these policy responses are likely to include:

The pandemic and the diversity of policy responses to it are widening the regulatory sphere across the GCC. The future of the region will likely have more variance on labor markets and in national investment climates, including on tax policy in the next few years. The implications of choices made now could have profound effects on a generation of job-seekers and their experience in relating directly to their governments for support.