Protests last month come as Sultan Haitham seeks to reduce Oman's debt, create jobs, and shift away from oil dependence, but its a long game. 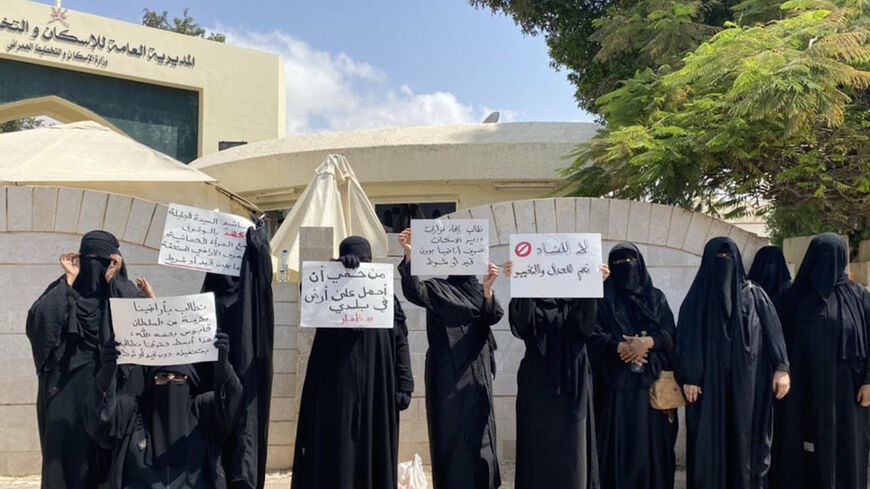 Omani women protest in front of the General Directorate for Housing and Planning in Salalah, Oman, May 28, 2021. - TWITTER/ochr

“Where is the oil and gas?” chanted protesters in the southern city of Salalah, to question the state’s use of hydrocarbon revenues.

Like them, hundreds of job seekers took to the streets of major cities in the Gulf sheikhdom in late May to protest over high youth unemployment and corruption.

The protests, met with a heavy presence of security forces and arrests of demonstrators, prompted a swift policy reaction from Sultan Haitham, who acceded to the throne in early 2020.

The ruler announced on May 25 that 32,000 full and part-time government jobs would be created.

A few days later, the Royal Army of Oman began steps for the recruitment of job seekers.

Activists and critics described the strategy as a “temporary fix” that fails to address the crux of Oman’s economic difficulties. “Please, do not repeat the mistakes of 2011!” tweeted prominent Omani activist Alawi Almshahur.

“I do not want to see my country all militarized,” added a young Omani university graduate who lives in Al Masnaah, north of Oman's capital city Muscat. Increasing militarization could limit the space for demands of political reforms, she said. Like others interviewed for this report, she asked her name be concealed for security reasons.

Omanis regret the lack of legislative power of the Majlis al-Shura, the country’s elected consultative council and only body representing the public at a national level. “Oman was set up to be ruled by a one-man show,” activist Ismail Al Muqbali told Al-Monitor in January.

Sultan Haitham inherited an indebted state with a poorly diversified economy and the shock caused by the COVID-19 pandemic has forced the government to accelerate reforming the Omani economy.

Government revenues are highly concentrated and majorly dependent on fossil fuel exports. Efforts to contain spiraling budget deficits, including reduced spending, austerity measures and diversifying revenues, have lagged. Last year, oil and gas still accounted for over 70% of state revenues and debt as a percentage of economic output rose to about 80%.

The sultanate is unlikely to decouple its economy from oil prices this decade, said Hatim Al Shanfari, a faculty member in the Department of Economics and Finance at Sultan Qaboos University and previously a board member at the Central Bank of Oman. “We will still be hostage to oil prices,” he said, noting transformative actions should be carried out in the meantime to “build up the momentum” of a sustainable economy and public finances.

Oman introduced a 5% value-added tax (VAT) in mid-April 2021 after repeated delays in the hope of generating $1 billion in revenue annually. But to prevent social discontent, the government specified that about 488 essential food products and essential services such as financial services, health care, education, rent and public transportation are exempt.

Burdened with billions of dollars in outstanding debts, the Omani government aims to reduce its headcount in the public sector, which employed 42% of working Omanis in 2019. But private-sector jobs often fall short of the expectations of many Omanis, whose working hours and income expectations tend to make them less competitive than migrant workers.

Despite a push to nationalize the workforce — Oman announced 2,733 expatriate teachers would be replaced by Omanis next year — employers remain reluctant to hire Omani citizens. In 2019, migrant workers accounted for 86% of the private sector workforce.

“Our generation is paying the price for mistakes made over the last decades,” said a second young Omani graduate who completed her bachelor's degree in political science and recently landed a job in another Gulf country. In Sohar, the epicenter of the recent unrest, Sara told Al-Monitor, “The government knew as early as 25 years ago that unemployment would be an issue. They knew, and they did nothing. If my family would let me, I would be in the streets protesting.”

“They say Omanis are not qualified, but I do not believe this. I think the main reason is they exploit those migrant workers; they cannot do this with Omanis,” Sara told Al-Monitor. According to figures released by the Ministry of Finance, 205,000 migrant workers employed by the private sector left Oman between March 2020 and March 2021.

Others suffer in silence from the scourge of unemployment. Majde is an unemployed mechanical engineer in Jebel Akhdar, one of Oman’s most popular travel destinations. “My hope is to find a job because I am 27 years old and cannot get married. In our tradition, starting a marital life requires money, so without a job, I cannot,” he told Al-Monitor.

The closure of wedding halls and COVID-19 restrictions meant, however, that many families accepted their sons and daughters marrying without wedding ceremonies, thus slashing the cost of tying the knot, which cost up to 10,000 Omani rials ($26,000) in pre-pandemic times.

The young graduate from Al Masnaah chose to start a business in the fisheries sector and take her destiny into her own hands instead of adding to the ranks of job seekers. “It seems like none of them is actually working in their field,” she noted.

“Friends are now proud that I am so young and own a company,” she said. The gradual demise of Oman’s social welfare system and government ‘jobs for life’ is pushing a growing number of young Omanis to explore career paths previously seen as unconventional. Fisheries is one of the sectors heavily promoted by Oman’s development plan Vision 2040.

The government should prioritize private sector organic growth over sector-centric top-down approaches that have previously failed, Hatim Al Shanfari suggested. “Making the business environment more attractive is an important prerequisite to jumpstart the growth,” he said.

Oman, a small energy producer whose oil resources could be depleted by 25 to 30 years at the 2019 production level, spends about a quarter of its annual budget on military expenditures — the world’s third-highest rate just after Eritrea and Libya, World Bank figures show.

Throughout his half-century reign, the former Omani ruler spent billions on British weaponry and surveillance equipment, including a bigger-than-expected contract worth around 2.5 billion pounds ($3.5 million) for 20 fighter jets signed in the aftermath of the 2011 protests.

Oman’s leaders have meanwhile tried to chart a path to financial sustainability without imposing strict austerity measures that could shake up socioeconomic stability.

Brent oil price trading above $70 a barrel since early June 2021 could provide some breathing room for the country’s leadership to pause some reforms and a unique chance to double down on diversifying the Omani economy away from oil revenues. The International Energy Agency has forecast a “huge decline in the use of fossil fuels” by mid-century.

Sultan Qaboos University’s Hatim Al Shanfari told Al-Monitor he regrets that a “lot of good things” that are happening to “correct what was misaligned in the past” have, unfortunately, “not been effectively communicated to the public,” causing anxiety among young Omanis.

“The old guard thinks transparent communication is a sign of weakness,” he added.

"We want the government to find those corrupted people and confiscate the money that they stole from the coffers of our country,” said a protester who spoke on condition of anonymity.

An Omani diplomat at the Omani Embassy in Washington, DC, told Al-Monitor the Gulf state achieved “remarkable progress,” ranking 49th in Transparency International’s 2020 Corruption Perceptions Index due to “efforts made to enhance governance and transparency."