Oman moves ahead with overdue reforms

Oman's leadership pushes ahead with reforms, cornered by the COVID-19 crisis and long-standing weaknesses in the local economy. Activists call for a constitutional monarchy. 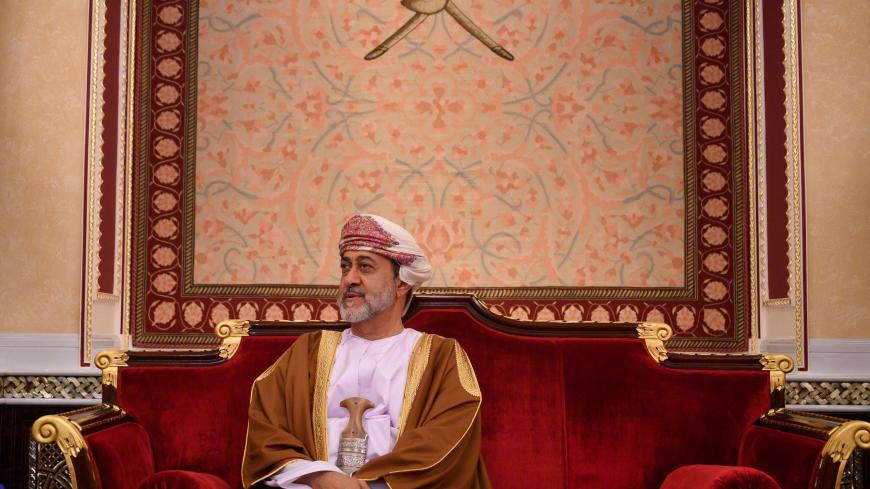 Oman's Sultan Haitham bin Tariq meets with US Secretary of State at al-Alam palace in the capital Muscat on Feb. 21, 2020. - ANDREW CABALLERO-REYNOLDS/AFP via Getty Images

The Middle East’s only sultanate has moved a step further into closer conformity with its neighbors' political systems by designating its first crown prince, the ruler’s oldest son.

Bloomberg columnist Bobby Ghosh had previously said that Oman had “strangest system of royal succession conceived in modern times” — the previous sultan, Qaboos bin Said Al Said, had named a cousin as his successor in a sealed envelope opened after Qaboos' death a year ago. Qaboos had no children or brothers. Now, Dhi Yazan Bin Haitham, the oldest son of Sultan Haitham bin Tariq Al Said, is the crown prince.

Calls for political changes, more transparency, economic reforms and ending the impunity of corrupt officials were the main demands of Omanis who took to the streets in 2011 in a rare wave of demonstrations during which security forces killed two stone-throwing protesters.

Hours after the violence, Qaboos acted swiftly to prevent further protests and announced the creation of 50,000 government jobs, raised pay for national workers, and, for those eligible, increased pensions and retirement benefits. Activists now characterize these measures as “temporary fixes” that failed to address the crux of the sturctural issues underlying Oman's economic difficulties.

“This was not an economic reform. The aim was to have less trouble with young people, taking them from the street to a job that does not cause troubles,” Omani journalist and researcher Rafiah Al Talei told Al-Monitor. “Our leadership was not serious about solving the real problems,” said a former protester who was ordered during his detention by Oman’s security agency Internal Security Service to stop questioning state policies.

The activist, who asked not to be identified, said Omanis “live in denial,” blinded by their profound respect for Qaboos, who revolutionized the lives of Omanis throughout his half-century-long reign. He overthrew his father in 1970 in a bloodless coup d'etat and dedicated the rest of his life to modernizing what once resembled a medieval state.

A few weeks after the death of the widely respected autocrat, the COVID-19 pandemic exposed longstanding weaknesses in the Omani economy, wiping out global oil demand that was expected to account for half of the government revenues in 2020.

Next year, Oman plans to introduce an income tax on high earners, a measure once unimaginable in a region known for offering income-tax-free salaries.

Those who protested in 2011 salute Haitham’s commitment to carry out long-delayed economic reforms, but wish the ruler would go a step further. “We want the separation of powers,” said Mohammed Al Fazari, an Omani activist exiled in the UK.

The sultan holds most executive, legislative and judicial powers, political parties are banned and broad laws restrict the rights to freedom of assembly and association. Fazari said he “cannot see anything” that could force the ruler to self-limit his power, “unless he really believes that would be best for Oman and has an intention to do so.”

Some Omani intellectuals say they thought Haitham might proclaim a parliamentary monarchy as the new political form of the country to “honor his father.” The latter served as a prime minister from 1970 to 1971 and favoured a constitutional monarchy.

In August, Haitham gave up the foreign, defense and financial affairs portfolios, signaling the end of an extreme concentration of powers that characterized the Qaboos era. These changes are “a clear example of the state’s commitment to work to develop the political system,” a diplomatic source at the Omani Embassy in Washington told Al-Monitor.

However, the Majlis al-Shura, the country’s elected consultative council established in 1991 by Qaboos, lacks legislative power and acts “more like a consultant to the sultan” than a real parliament, said human rights activist Ismail Al Muqbali.

“Oman was set up to be ruled by a one-man show,” he told Al-Monitor.

Talei said the 49% participation rate in the 2019 Majlis al-Shura elections indicates people have “no hope” that the only body representing the public at the national level could change something substantial in their lives.

“They ‘cancel’ you culturally”

The COVID-19 economic crisis is “drawing the features of the future of Oman,” in the words of Talei, yet, citizens have little say about their future as they remain largely excluded from decision-making processes. Muqbali calls for a public debate so that savings generated by austerity measures are “not be spent on luxury things or buying new weapons.”

Activists interviewed by Al-Monitor noted improvements in freedom of speech since the 2011 protests and the emergence of social networks, offering a unique space for Omani citizens to question the performance of high-ranking officials, including Cabinet ministers.

In Washington, the Omani Embassy said freedom of opinion and expression “within the capacity of the law” is guaranteed by Article 29 of the Basic Law of the State.

However, the security apparatus is accused by human rights organizations of using harassment and short-term detentions to intimidate peaceful government critics.

“The Internal Security Services cannot prevent people from using social media, but they use pro-government propaganda bots to cast doubt on you. They ‘cancel you culturally,’ so whenever you speak up, nobody will believe you anymore,” Fazari said.

As Oman enters a new era of its history, activists call on Haitham to distinguish himself from his predecessor by supporting a politically active society driven by the value of critical thinking that is required to diversify the local economy away from oil.

Prominent Omani academic Abdullah Baabood said in a tweet that gradual changes in the nature of the rentier state and the social welfare system necessitate “a serious change” in the social contract to “avoid a new episode” of the protests that shook the sultanate in 2011.