It will be a challenge for the government to keep its commitments to Omanis while sliding oil prices hinder its ability to increase government services in times of unrest, a crucial lifeline for the monarchy since the Arab Spring. 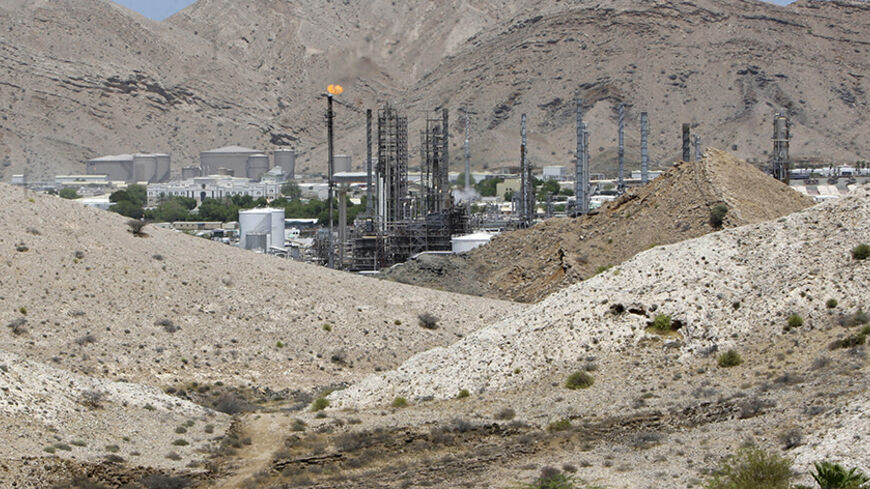 Petroleum Development of Oman, near Muscat, is seen in this photo taken June 5, 2010. - REUTERS/Fahad Shadeed

Tumbling oil prices are upsetting political equations all over the globe, especially for governments that depend heavily on oil revenue to provide services for their populations. Prominent petrostates like Russia and Venezuela have been hit particularly hard, but certain governments in the oil-rich Middle East are also being forced to tighten their belts.

The slide in oil prices from $115 a barrel to below $60 over the last six months is proving particularly challenging for the Sultanate of Oman. With prices likely to remain low for the near to medium term, Omani officials are scrambling to find alternative sources of revenue outside the oil industry, on which Oman depends for 83% of its income.

The sultanate’s vulnerability to falling oil prices was underscored late last year when Standard & Poor’s cut its outlook for Oman’s sovereign rating from stable to negative.

On Jan. 1, Oman’s Financial Affairs Minister Darwish al-Balushi announced Oman’s budget plan for 2015. Expenditures are set for $36.6 billion, marking a 4.5% increase from last year’s budget. However, as revenues are expected to decrease by 1% this year, Muscat’s projected deficit is $6.49 billion, 21% of government revenue and approximately 8% of the country’s gross domestic product.

Last month, the economic and financial committee for the lower house of the Majlis al-Shura (Oman’s legislative body) proposed a “fair tax” on liquefied natural gas exports, estimated to generate $509 million. The Majlis al-Shura has also approved legislation to impose a 2% levy on the remittances that Oman’s 1.9 million expatriates send overseas, which the Majlis al-Shura estimates would raise $161 million in revenue. Yet, to the relief of Oman’s foreign workers, officials in Muscat feared the tax’s potential negative implications for the sultanate’s foreign investment climate and ultimately rejected the plan shortly before al-Balushi announced this year’s budget.

The Majlis al-Shura also proposed a 12% levy on telecommunications revenue, which Oman News Agency reports would bring in $80.5 million. Meanwhile, in early December, two Omani cement companies — Oman Cement and Raysut Cement — announced that the Ministry of Oil and Gas would double the price of natural gas for the two firms beginning this month.

The Majlis al-Shura is reportedly considering a review of all tax rates. Muscat is also considering a variety of other ways to cover the shortfall, such as seeking $1.4 billion in international loans and grants from donors outside of Oman, tapping its sovereign wealth fund, issuing $520 million in Islamic bonds and borrowing $1.04 billion from lenders in the country’s local market.

Last year, the Majlis al-Shura also recommended cuts to key programs, including a 5% reduction on oil and gas production, defense and development projects. According to the Finance Ministry, state spending in education, health, housing and training will remain at the same levels of last year. Yet, al-Balushi stated, “Due to low oil prices, it was necessary to take some temporary measures to maintain financial stability. These measures will not affect the common people, their living standards or employment.”

The government’s decision to avoid painful spending cuts must be understood within the context of the sultanate’s sensitive environment: Oman’s unique stability is largely attributed to the state’s high domestic spending, making budget cuts a politically risky solution to the shortfall in oil revenue.

Oman's ability to increase government services in times of unrest has been a crucial lifeline for the monarchy in the recent past.

Several weeks after the rulers of Tunisia and Egypt stepped down under public pressure in January and February 2011, Oman joined the nations that experienced the Arab Spring. For several days, Omani youths held demonstrations in Sohar and Muscat, demanding political and economic reform. Within the context of the Arab Spring occurring in other Arab states, most notably Syria, the unrest in Oman was comparatively minimal. In total, six anti-government protesters lost their lives in clashes with police and a supermarket was set ablaze.

In stark contrast to other Arab regimes that made lethal crackdowns on street demonstrators in early 2011, Omani authorities responded with concessions, not brute force. Oman’s government publicly recognized the “legal rights of citizens” — albeit while condemning “sabotage” — and increased government spending on social programs intended to address the protesters’ economic grievances. Sultan Qaboos bin Said ordered the government to create 50,000 jobs and pay every job-seeker $386 each month. While large-scale demonstrations in other Arab states demanded their rulers' ousters, the Omani protesters demanding reform actually pledged allegiance to Qaboos, showing their support for the monarchical system while demanding changes within it.

The government’s reaction to the demonstrations in Sohar and Muscat has served its interests well. Throughout the Arab Spring, Muscat has governed a stable and peaceful country, and Qaboos has maintained a degree of popularity enjoyed by no other Middle Eastern leader of the 21st century. Though insurgencies, terrorism, economic deterioration, foreign military intervention and sectarian unrest have killed and displaced millions of Arabs in the last four years, the Omani public overall is grateful for the harmonious state of relations among the sultanate's diverse tribes, ethnicities and religious communities, as well as a high level of stability and prosperity that has enabled Oman’s tourism industry to flourish.

Despite maintaining stability, however, Oman’s monarchical political system has not democratized, and power remains staunchly in Qaboos’ hands. Observers conclude that as a rentier state, the government has been successful in quelling the citizenry’s democratic aspirations in exchange for material benefits in the form of generous state spending on social programs.

At this juncture, the Omani government’s challenge is to maintain this unwritten agreement with its citizens as sliding oil prices create new fiscal pressures.

Qaboos’ extended stay in Germany — where he has been undergoing medical tests since July 10 — and his frail appearance in his Nov. 5 broadcast (Qaboos’ first public appearance since traveling to Munich) are heightening concerns about the sultanate's looming succession question. Thus, as Omani officials begin to take on difficult budgetary dilemmas, the monarchy faces an uncertain political future.

All of the Gulf Cooperation Council’s monarchies understand that their economies cannot remain dependent on oil forever. However, Oman’s crude oil reserves are expected to deplete far sooner than those of neighboring Saudi Arabia and the United Arab Emirates, putting greater pressure on Oman to increase the role of non-oil sectors in its economy. The sultanate’s unique stability will be tested if future economic reform triggers unrest and the government lacks the lifeline it used before.