Efforts to put public finances on a healthy footing and tackle chronic budget deficits have started to pay off, facilitated by a sharp increase in oil prices, Oman’s main export. 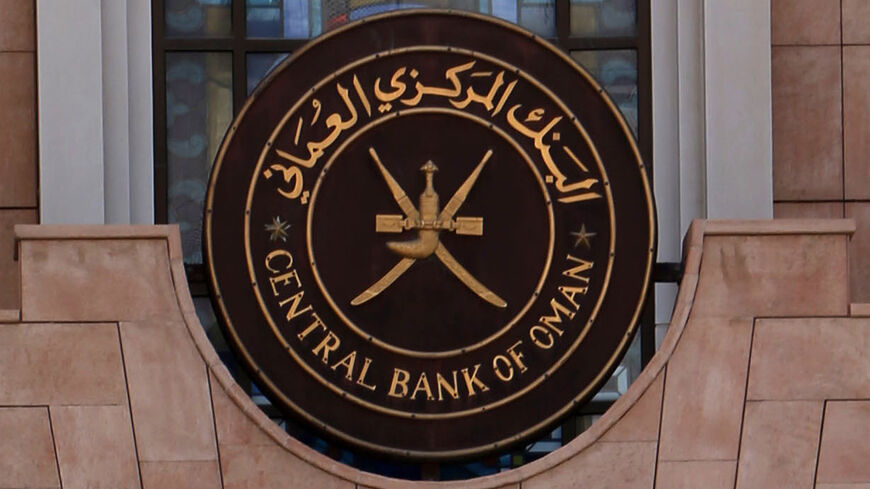 A picture taken on June 21, 2017, shows the logo of the Oman's Central Bank in Muscat. - MOHAMMED MAHJOUB/AFP via Getty Images

Oman's fiscal situation is "very stable and improving,” three sources at the sultanate's National Program for Fiscal Balance told Al-Monitor on condition of anonymity. Also known as the Tawazun program, it reports to the Ministry of Finance with a dotted line to the country’s ruler. Sustaining public finance has been a race against the clock since 2020, when Sultan Haitham bin Tarek inherited an indebted state from his predecessor, the late Qaboos bin Said Al Said.

Fitch Ratings upgraded Oman's outlook to "stable" from "negative" in December 2021 to reflect improvements in key fiscal metrics. Interestingly, the rating agency pointed out the high correlation between swings in oil prices and the country’s fiscal health. It estimated that higher hydrocarbon revenues, which grew only by a third, “likely accounted for more than half” of budget deficit narrowing in the fiscal year 2021 to nearly five times less than in 2020.

Non-oil revenues are on a steady upward trajectory, too, helped by recovery from the COVID-19 economic fallout — Oman levies a corporate tax on companies — and introducing a 5% value-added tax in April 2021. The tax is expected to provide the government 450 million Omani riyals in 2022, or about 13.5% of its total non-oil revenues. Plans to launch the gulf’s first income tax on high-net-worth individuals is “still on track,” a source at Tawazun said.

Additional relief might be ahead as the 2022 budget is based on a barrel at $50, well below current oil prices. Tawazun sources estimated "the majority” of extra oil windfall will be allocated to cutting public debt, estimated in 2021 at 68% of gross domestic product. It would contribute to lower government interest payments that increased, on the back of rising public debt, from approximately 35 million riyals in 2014 to nearly 1 billion in 2020.

“We expect Oman will be able to comfortably meet its debt redemptions this year through a syndicated loan raised earlier in the year and by drawing on its assets in the Petroleum Reserve Fund,” Zahabia Saleem Gupta, associate director at S&P Global Ratings, told Al-Monitor. Funding requirements remain sizable, however. Gupta said external maturities will be around $6.5 billion in 2022, before averaging $3.5 billion between 2023 and 2026.

“If oil prices do fall back and Oman does need to issue new debt, it will have to do so at higher rates," Capital Economics' Middle East economist James Swanston told Al-Monitor. Red-hot inflation figures cornered central banks to depart from the low-interest-rate environment that has prevailed since the 2008 global financial crisis. The US Federal Reserve announced a 0.25% interest rate hike and penciled in six more rate increases in 2022.

However, Oman’s claims that its fiscal position has improved should be nuanced. In line with other Gulf states, the country removed some expenditures from its budget by transferring part of the responsibility to shoulder indebtedness to state-owned and government-related entities. Energy company Energy Development Oman, which pays dividends to the budget, raised $2.5 billion of debt financing in 2021 to finance capital spending on its own.

S&P Global Ratings estimated in a March 2022 report that Gulf Cooperation Council governments’ balance sheets are "sufficiently strong to absorb financial distress in the government-related entities sector without materially worsening their overall fiscal positions," with the exception of Oman. In December 2021, Fitch Ratings wrote, “Government-related entities indebtedness has the highest potential to affect sovereign ratings in Qatar and Oman.”

Oman’s sovereign wealth fund took over all state-owned companies in June 2020. It announced the restructuring of boards of directors to upgrade their performance, indirectly helping to minimize financial risks stored in government-related entities’ balance sheets.

'Are we spending well?'

Beyond mere numbers and financial indicators, a systemic shock is underway. “We try to instill some discipline because we tend to have a short memory and want to make sure we do not plan long-term expenditure depending on three months' oil prices,” a Tawazun source said.

The bump in oil revenues risks indeed being relatively short-lived. Besides the long-term energy transition outlook, Oman is set to run out of its crude oil reserves in 25-30 years if production continues at 2019 levels. “It will not be prudent if we just bet everything that oil will always be there and it will always be in demand,” the Tawazun source added. “For you to have financial sustainability, you cannot plan your economy around one volatile commodity.”

In the long term, Oman plans to develop several economic sectors, such as tourism, mining and logistics, to develop jobs for the citizens and new revenue streams for the government. “We want to significantly improve the contribution of logistics into our economy. … We are actually building the sector for the next generation," Abdulrahman Al-Hatmi, CEO of Oman’s national logistics group, ASYAD Group, told Al-Monitor in November 2021.

At the heart of the aggressive push for fiscal discipline is also an effort to lower public expenditures, reduce bureaucracy and minimize improper use of resources, therefore adding up to profits from higher revenues from tax receipts, oil and gas exports and dividends from investments by the country’s sovereign wealth fund, the Oman Investment Authority.

In 2020 alone, Oman trimmed the number of ministers through mergers and consolidations, from 26 to 19 and reduced capital expenditures. It retired all public civil servants who had served for more than 30 years and let go 70% of foreign experts and consultants working in civil and government units, risking the know-how central to achieving diversification.

Oman’s fiscal experience offers valuable takeaways to other GCC states, whose fiscal stability relies heavily on the proceeds from oil and gas exports. “The critical lesson is to set out these plans early and start to implement straightaway rather than doing at on the edge of crisis,” Oxford Economics Middle East' chief economist Scott Livermore told Al-Monitor.

The National Program for Fiscal Balance now works with the Ministry of Education and Ministry of Health as well as dedicated economists to “answer the two big questions: Are we spending enough, and are we spending well?” the Tawazun source said. Austerity does not affect all sectors uniformly, though. Oman still records one of the world's highest rates of defense and security expenditures, expected at 24% of total government spending in 2022.

Two steps forward, one step back

Proceeding at full throttle to put public finances on a healthy footing has nonetheless come as a stark reminder that the Gulf’s hereditary monarchs risk political stability by opening the throttle too far. As economic reforms started to hurt Omanis' buying power, hundreds of angry job seekers took to the streets to protest high youth unemployment and corruption.

In Sohar, the epicenter of the 2021 social unrest, Omanis expressed bitterness towards the country’s political elite. “The government knew as early as 25 years ago that unemployment would be an issue. They knew, and they did nothing,” a young Omani graduate told Al-Monitor.

Fissuring socioeconomic stability forced Oman to strengthen its social safety nets and take two steps forward and one step back to chart a path to fiscal sustainability. Sultan Haitham instructed the creation of 32,000 full and part-time government jobs and ordered additional social security payments ahead of Ramadan 2022.

The sharp increase in oil prices bought the country some time to make the pill easier to swallow. The previous decision to phase out residential electricity subsidies by 2025 has been adjourned, and they are now expected to run for 10 years. “We follow closely the issue of cost of living and matters that affect the life of the citizen,” Sultan Haitham bin Tarek said in front of governors and tribal leaders. Days later, the ruler issued a royal order to allocate an additional 200 million riyals ($520 million) to the development budget this year.

“Oman has among the weakest balance sheets in the Gulf so this is likely to prove a precursor to similar moves elsewhere,” wrote Capital Economics’ Swanston. The oil rally might be a bonanza for Gulf petrostates — Saudi Arabia’s Crown Prince Mohammed bin Salman said the tripling of the VAT rate to 15% will only be “temporary,” but S&P Global Ratings warned in 2021: “Higher oil prices derailed GCC governments’ fiscal consolidation plans in the past."

Social resistance faced by the Omani government is emblematic of GCC states’ limited leeway to reform decades-old social contracts. The region was trying to “avoid the inevitable” but needed to act, a Tawazun source said. “I think building a sense of urgency is very critical.”