Push harder or take a breath on economic reforms? The question can be tricky for Gulf rulers 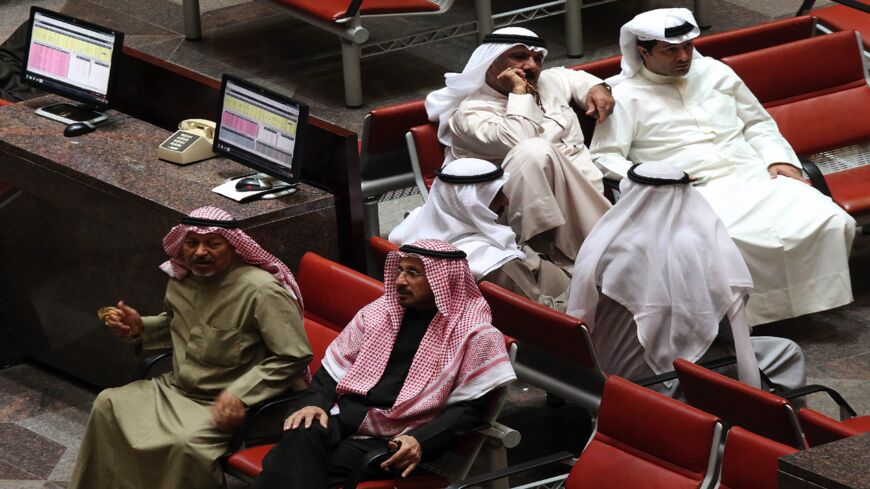 Kuwaiti traders follow the market movements at the Stock Exchange in Kuwait City on Dec. 17, 2014. OPEC has no plans to intervene in the oil market to shore up sagging crude prices, the Kuwaiti oil minister said, as Brent crude breached the USD 60 mark. - YASSER AL-ZAYYAT/AFP via Getty Images

Just a year after oil prices tumbled, the world’s top commodity traders predict that Brent crude could return to $100 a barrel for the first time since the 2014-2016 collapse in oil prices. The impulsive oil rally is a real bonanza for the Gulf petro-states that still rely heavily on oil exports to fund a large chunk of their annual budget — over 80% in Kuwait.

With oil breakeven prices needed to balance their budgets within reach, Gulf states can slack off the debt-raising spree they have embarked on to counterbalance low oil prices since 2014. Total annual debt issuance by Gulf Cooperation Council (GCC) states will “average about $50 billion over 2021-2024,” S&P Global forecasted, compared to close to $100 billion in 2017.

Qatar expects a budget surplus and will tap the debt market only on an “opportunistic” basis.

However, the austerity push launched during the COVID-19 pandemic is still a hot topic of conversation for families in the Gulf as reforms start to weigh on the budget of households often accustomed to the government's largesse, tax-free high wages and generous subsidies.

Omani jobseekers took to the streets of major cities to demand jobs just a month after the introduction of a repeatedly delayed 5% value-added tax (VAT). The Omani ruler announced the creation of 32,000 full- and part-time government jobs to ease public discontent, in contradiction with a push to streamline the country’s bloated administration. A source close to Omani officials also told Al-Monitor “there are some discussions regarding the timing and extent of introduction” of an income tax on high earners that was initially expected in 2022.

In Saudi Arabia, the tripling in July 2020 of the VAT rate to 15% is a hard thing to swallow, but the decision will only be “temporary," Crown Prince Mohammed bin Salman said. “It will continue for a year, maximum five years, and then things will go back to what they were.”

The improving fiscal situation might be a welcomed short-term relief for Gulf economies, but it also risks giving a false sense of economic security. “Higher oil prices derailed GCC governments’ fiscal consolidation plans in the past,” the S&P Global May report warned.

Reform has its price

Reforming Gulf economies away from oil requires some measure of dislocation and loss of subsidies, and a great deal of uncertainty, among populations accustomed to generous public sector benefits.

People “underestimate the threshold of pain” that populations can put up with before social cohesion cracks, argued Ali Shihabi. The Saudi analyst close to the royal court told Al-Monitor, “Saudi is a very long distance away from such a (break) threshold today, so do not see an urgency to pour more money into society.”

Unlike the VAT, other reforms might not be temporary, and Shihabi said raising utility and energy prices aims not only to slash government expenditures but also to change behaviors. “Saudis used more water per capita than Europeans, and massive waste was taking place, also in electricity and petrol usage, so I do not expect any changes in those steps,” he said.

Higher oil prices could, however, revive capital expenditures. Last year, the government slashed operational and capital spending by $26.6 billion, including in some reform projects.

“I am somewhat skeptical that this 'Dubai on steroids' strategy will reduce the reliance on hydrocarbon revenues markedly,” El-Radhi told Al-Monitor. He said non-oil strategies pursued by Gulf states are too similar and could cause “significant cannibalization effects.”

“Doing something you love is way more meaningful”

The current oil price super-cycle is likely to be the last before a sharp reduction in global oil consumption, making the economic transformation of oil producers “imperative,” noted the International Monetary Fund’s journal Summer 2021 edition. “To jettison their hidebound economies, which have led to low productivity and waste, oil-rich economies should commit to reforms that lessen obstacles to innovation and entrepreneurship,” the authors wrote.

Indeed, the crux of the issue for the Gulf states is less imposing a slew of new taxes than sending a shockwave through their societies to trigger a change of attitude as decades of oil rentierism is likely to gradually give room to private sectors-driven productive economies.

The economy of Saudi Arabia had been built “as a petroleum economy,” acknowledged Minister of Investment Khalid Al-Falih in a Vision 2030 promotional documentary released in June 2021. “We became dependent — a fact we should recognize and not deny,” he said.

“Such a huge economic transformation requires some big-push approach and will not be achieved by piecemeal reforms,” commented El-Radhi. Young Emirati entrepreneurs agree and believe behaviors should change from the grassroots. For example, the lack of solutions to mental health challenges convinced Khawla Hammad to create the solution from scratch.

After years working for Abu Dhabi-based government entities, the Emirati national launched Takalam in early 2020, an online counseling platform that supports mental well-being. “I have always wanted to do something that makes a difference,” Hammad told Al-Monitor, adding, “Doing something you love is way more meaningful than a traditional career path.”

Although she was born in “a very traditional family,” the young entrepreneur found support from relatives, as well as from an ecosystem that has moved from favoring big brick-and-mortar businesses to increasingly supporting creative, tech-oriented young entrepreneurs.

“Now entrepreneurship is being highlighted as a career choice to make it popular,” Hammad said. She viewed the COVID-19 pandemic as a life-changing event. “It showed us that if we need to shift and change, it is really doable. That is just a matter of making it happen.”

The addiction to oil revenues is sticky, though. The share of fossil fuels in the global energy mix remained unchanged between 2009 and 2019 at 80%, and rating agency Moody's said Gulf petro-states that have made limited progress in diversifying their economies since 2014 could remain heavily dependent on hydrocarbon production for at least the next 10 years.