Flushed with cash from a post-pandemic oil boom, Gulf states once again face a choice: lifting up their citizenries’ short-term contentment or fiscal restructuring and investing in long-term productive assets. 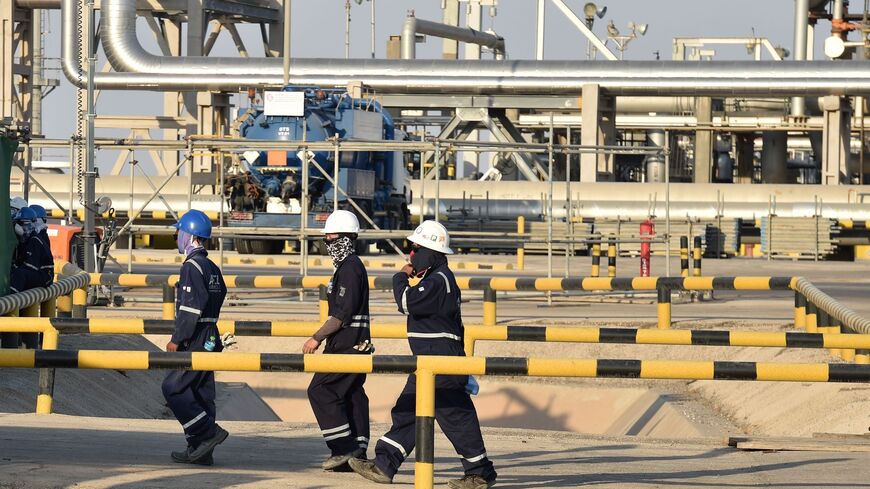 Gulf states are floating on air from the good news of 2022. Money flows upward on the back of inflated energy prices, wire-transferring wealth from inflation-hit countries to oil-exporting nations. Middle Eastern energy exporters will reap up $1.3 trillion in additional revenues over the next four years, the IMF forecasted.

Saudi Arabia is poised to become one of the world’s fastest-growing economies in 2022. Its gross domestic product increased 12.2% in the second quarter as state-owned oil giant Saudi Aramco unveiled a record profit of $48.4 billion. LNG heavyweight Qatar posted a 12-fold jump in surplus for the first half. The same goes for Gulf's weakest economies: Bahrain posted a $88 million mid-year surplus, and Oman expects its first yearly surplus in a decade.

Swiss bank UBS forecast that Gulf Cooperation Council (GCC) economies will grow 3.4% in 2023. Fitch Ratings had a "negative outlook" on Saudi Arabia during the 2020 oil prices crash but moved to stable in 2021 and this year has switched to a "positive outlook" on the back of higher oil prices and progress with fiscal and economic reforms, the agency’s head of Middle East and Africa sovereign ratings, Toby Iles, told Al-Monitor.

Oman was hit by “a lot of rating downgrades” during the oil price decline but Fitch moved the outlook to stable in 2021 and upgraded the rating in August 2022, Iles added.

In July, Oman announced it will repay $1.33 billion of loans ahead of maturity to reduce public debt, only weeks after it completed a $701 million voluntary debt buyback. By August 2022, Oman public debt had dropped 11.5%.

Backsliding to the good old days?

The oil bonanza bolstered the firepower of sovereign wealth funds, the Gulf’s primary vehicles to invest fiscal surpluses. Saudi Arabia Public Investment Fund (PIF) boosted its holding of US stocks by $7.5 billion in the second quarter of 2022. The oil boost might be short-lived, though. The fear of a sharp economic slowdown in 2023 has intensified — Saudi Arabia forecasts its 2023 fiscal surplus to be ten times lower than in 2022 — and OPEC+ agreed on a major cut in production by two million barrels per day from November 2022 to stabilize crude prices.

This time around, the investment strategy is likely to be more pragmatic than in the past. Michael Maduell, president of the Sovereign Wealth Fund Institute, expects “less of the sexy/flashy investments” that Gulf sovereign wealth funds got notorious for in the mid-2000s. It is hard to estimate how oil receipts are “pumped in and out” of those opaque government-owned entities, but more money is likely to keep flowing in as long as oil prices sustain above $50 a barrel, Maduell told Al-Monitor. Fitch Ratings forecasts $85 a barrel in 2023 and $65 in 2024.

Besides deploying capital to diversification projects aimed at moving away from reliance on oil revenues, Gulf states redistribute part of surpluses to their citizens. The latter have received a slice of the profits for decades. but that social contract eroded as budget deficits ballooned following the oil price plunge of 2014-2016.

“Some of the internal political barriers within the public administration have been removed,” Bahraini economist Omar Al-Ubaydli told Al-Monitor, adding internal dynamics have become “more favorable” to reform as younger decision-makers, who grew up in an era of surging public debts, take over.

“Less handouts to the people, more money in the institutions,” Maduell said. In May, Saudi Arabia said it will tuck away the 2022 oil bounty in a government current account until the end of the year. “The windfall from the additional revenues that we will get from high oil prices will be essentially invested in resilience,” said Faisal Alibrahim, minister of economy and planning.

“More and more tax across the region”

The International Monetary Fund (IMF) welcomed Saudi Arabia’s “fiscal discipline” and its “adherence to the 2022 budget ceilings” in an August 2022 assessment but acknowledged “pressures to spend oil windfalls” as one of the key downside risks. The United Nations agency also underscored the need to reconsider the cap on gasoline prices and maintain the VAT at 15%, which Crown Prince Prince Mohammed Bin Salman called in 2021 a “temporary measure,” pledging to bring it back to between 5 to 10% by 2026.

“There is just going to be more and more tax across the region,” said Steven Ireland, head of tax at UAE-based Creation Business Consultants. The tax expert told Al-Monitor that he keeps a close eye on the possibility of VAT in Qatar and Kuwait in the coming years and a universal corporate tax in Bahrain. The Emirates launched a campaign to attract global talents and businesses on the eve of introducing a 9% corporate tax in June 2023 for profits above AED 375,000 ($102,000).

“A decade ago, no one was interested in taking tax advice. They would say, ‘we never paid tax in the past, so why would we need advice.’ But things have changed,” Ireland said.

Earlier this year, Omani officials told Al-Monitor that an income tax is now in the pipeline. “Taxes can be quite powerful because even if they come in at a fairly low rate, then at least you have the instrument; you can then change it,” Iles said. In the UAE, Ireland said the focus is on corporate tax, and personal income tax is unlikely “at least for another five years.”

The evolving tax landscape reflects what the GCC Secretary General perceives as a changing role of governments, from “creating the economy” to “incentivizing the growth.” In Saudi Arabia, the PIF acts as a “cornerstone investor” to enable and “crowd-in’’ the private sector.

“I think there is a sharp realization across the region that the state can't be the last employer of resort forever,” Iles said. Yet across the Gulf, public sector wages still consume between 30% and 50% of total public spending.

Beyond the economic diversification hype

According to Razia Khan, chief economist for Africa and Middle East at Standard Chartered, a bank, economic diversification efforts have started to pay off. “During the COVID period, we saw less fiscal deterioration in the GCC than in previous instances of low oil prices,” Khan told Al-Monitor.

“Diversification has been a perennial theme, but it has not necessarily made much headway,” Iles said. As a flurry of projects get off the ground, the risk of a herd of white elephants out of touch with economic realities hovers over the horizon. Saudi Arabia’s planned futuristic megacity NEOM, for instance, has been described as a science-fiction jumble.

The top-down and non-participatory decision-making approach is unlikely to prevent Gulf governments from pushing reforms, analysts believe. The long-term move could be to dismantle favorable corporate tax regimes for locals in Qatar, Kuwait and Saudi Arabia, said Steven Ireland, the tax expert.