A siren is blaring for local labor markets as the global pandemic and falling oil revenues begin to upend the Gulf states' economies. 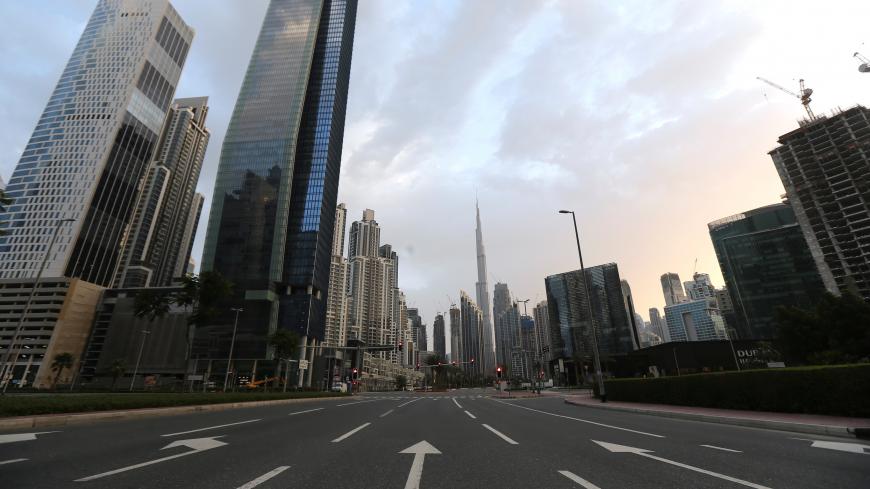 A general view of the Business Bay area is seen after a curfew was imposed to prevent the spread of the novel coronavirus disease in Dubai, United Arab Emirates, March 28, 2020. - REUTERS/Satish Kumar

If the late 2014 decline in oil prices and subsequent hit to GCC fiscal revenues is any guide to the current oil glut, the signal now to Gulf labor markets is a siren. When oil revenues declined sharply in late 2014, the structural fundamentals were similar to what OPEC+ members thought they saw in early March 2020. They saw declining demand in China and persistent supply from US producers. OPEC, with new partners like Russia and Mexico (the "plus"), responded in late 2016 with production cuts that held prices steady in the range of $50-70 per barrel until the agreement fell apart on March 5.

Since then, oil prices have been in free fall, reaching under $20 per barrel, as Saudi Arabia committed to expand production and flood markets with product. Barring some unlikely cooperation that would require private firms across the United States and Europe to agree to trust Russian oil producers and the Saudi government, oil producers are bracing for impact. What is profoundly different from the price volatility five years ago, and what the Saudis and Russians surely could not have fully foreseen, is the demand destruction from the novel coronavirus pandemic that has wreaked havoc on the largest economies in the world.

The siren is blaring for labor markets because the last oil market downturn spurred a series of policy shifts with "nationalization" of jobs in certain sectors, more flexible visas, new taxes and fees on the backs of foreign workers and vast purges of low wage workers in construction. New nationalization policies across the GCC are meant to encourage and safeguard certain jobs for citizens. Oman blocked foreigners from working in more than 80 job categories. Saudi Arabia reserved employment to nationals in a number of retail and hospitality sectors, from mobile phone shops to eyeglass stores. The decline in government contracting, a cyclical normality to GCC economies when oil revenues drop, was especially sharp between 2015 and 2018. Expatriate workers felt that pain as low wage construction workers found themselves stranded and unemployed. As many as 700,000 foreign low wage workers were laid off in Saudi Arabia and went home to poor communities in the Middle East and South Asia unable to support their families.

For Gulf economies with a disproportionate number of foreigners to citizens, governments enacted taxes and fees that would turn foreigners into new sources of revenue, including the institution of road tolls, visa renewal fees and excise taxes on alcohol, tobacco and sugary drinks. In all, the last downturn spurred some diversification measures that did less to wean governments from oil revenue than to encourage governments to pull back on some generous social spending and ending the normalization of government subsidies of electricity and water as well as expected public sector jobs for citizens.

In the five years since 2015, foreign workers across the Gulf have been scrutinized by GCC governments for their utility as consumers and sources of government revenue in taxes and fees. And governments have also seen where lower skilled labor is a useful entry point for nationals in the workforce, especially in Saudi Arabia's retail and service sectors. Those expatriates with investment potential as real estate buyers or highly skilled experts have received some privileged residency status opportunities.

This time, the pain will be broader across labor markets. There are a few reasons. First, governments around the world are seeking policy measures to ease the burden on workers, as unemployment in the service sector and retail jobs surges. GCC governments have little incentive to give cash supplements to displaced workers, as most are foreigners. The assumption is that unemployed foreigners must return home, usually within a 30-day period of termination. Moreover, the legal requirements that firms and organizations have toward foreign workers may be changing, in some cases making it easier for businesses to lay off workers. The UAE enacted a new regulation on March 26 that allows employers to make workers redundant but must still provide housing (if provided contractually) and allow the employee to transfer his or her visa to a new employer if a new position is found. It also allows the employer to temporarily reduce salaries or force employees to take paid or unpaid annual leave. Saudi Arabia has announced partial salary support for citizens working in the private sector who are made redundant, but no support for foreign residents.

Second, GCC governments are responding with stimulus packages that mainly provide liquidity to the banking sector and provide some minimal support to small and medium-sized businesses. As coronavirus cases mount across the region and the burden extends to health care systems, governments will need to make difficult decisions about extending care to all citizens and residents, as King Salman bin Abdulaziz Al Saud has committed to do. But many private hospitals in Saudi Arabia are reliant on the government for payment from the General Organization for Social Insurance, Ministry of Health or National Guard. They may see payments delayed as the government extends benefits across the population and struggles with a number of fiscal burdens. But these packages are unlikely to stem the losses in the largest employers in the region — state-owned or state-related entities from airlines to logistics and major contracting firms. These businesses will need major recapitalization just to survive and they will not survive with the same number of employees.

Third, people will want to go home. The social impact of the pandemic on transnational labor will be devastating. The panic of repatriating stranded citizens as borders have closed and flights have been canceled over the last few weeks has created a new reality for global labor. From retail workers to senior executives, many expatriate workers are finding it unsettling to be quarantined in a foreign country, without family support or familiarity with health care norms. We should expect the end of the school term and beginning of Ramadan to prompt departures of expatriates from the Gulf.

The economies of the GCC states will experience major changes from the twin COVID-19 and oil crises, as will the global economy. The societies of the GCC states, however, may be the most changed in terms of their demographic composition and reliance on foreign labor. This could be a moment for recalibration of reliance on foreign workers. It could also be a moment in which standards of living are drastically downshifted as a vibrant consumer base is weakened by expatriate exits.