Israel must wake up and 'recognize reality' of Iran deal

The crisis in Israeli-US ties following the Iranian nuclear agreement demands a fundamental shift in Israeli policy, including Israeli recognition of the deal and an immediate change in Prime Minister Benjamin Netanyahu’s relationship with the White House. 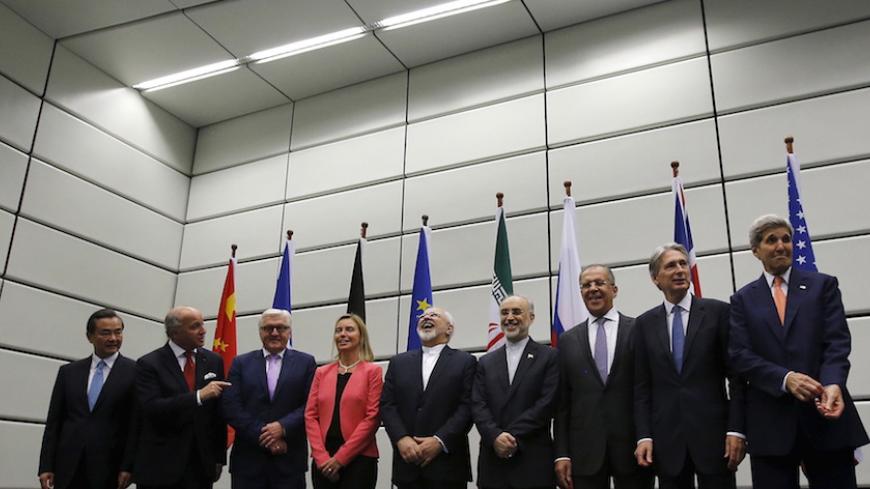 Top officials from the European Union, Iran and P5+1 nations pose for a group picture after a nuclear deal was reached in Vienna on July 14, 2015. - REUTERS/Carlos Barria

Despite the ferocious political attacks between the White House and the Israeli government, one hears from both sides positive ramblings about future relations between the two countries. Governmental spokespeople, mainly in Israel, describe the current rift over the Iranian nuclear deal as an unfortunate incident, or “accident,” in a family with genuinely good relations. This, however, is not the case, and there certainly might be long-term damage to the strategic alliance between the two countries.

A senior State Department official involved in US Middle East policy told Al-Monitor on condition of anonymity that while it is the Barack Obama administration’s intention to uphold good relations between the countries, including upgrading security assistance to Israel after congressional debate on the Iranian agreement, it might take a long time before the past level of trust between the two countries is restored. “The current mistrust toward the Israeli government is such that it may erode the very quality of coordination between the two governments,” he said.

One comes away from talking to this State Department source with the impression that the schism is not only in regard to the policy approach on how to deal with Iranian nuclear ambitions, but even more so the result of the Israeli prime minister’s partisanship. Since the last US elections, Washington believes that Prime Minister Benjamin Netanyahu has been siding with the Republicans. He made little secret of his preference for Mitt Romney, Obama's Republican opponent in the last presidential election, and most probably hopes for a Republican to replace Obama in the 2016 elections.

One can conclude from the State Department source that in addition to possible long-term damage, short-term damage can already be seen in US-Israeli relations in several key areas. One involves the nuclear deal itself, as the lack of mutual trust could harm the pace and scope of information exchange in regard to the implementation of the Iran deal. Also, as Netanyahu’s overall Middle East policies are seen as a rejection of any diplomatic process in the region, the United States will be severely critical of any settlement expansion in the West Bank and will not, contrary to the past, block European punitive measures involving Israeli settlements.

Although the United States will not initiate an active peace policy given the unwillingness of the parties to negotiate, Washington, said the State Department source, is considering not casting a veto against a French proposal on Palestinian statehood at the UN Security Council. Anti-terror policy coordination in relation to Hezbollah, the Islamic State and Hamas will continue among Israeli and US defense officials, but broader strategic policy coordination will be stalled, even in the likely event of a future Obama-Netanyahu meeting.

Even more worrisome are the possible long-term repercussions of the current crisis in US-Israeli relations. The most dangerous among them is damage to the US perception of a values-based strategic partnership between two peace-seeking liberal democracies. Today’s Washington perceives serious erosion in Israel’s commitment to these values. This was once the most basic foundation of the strategic alliance.

Another potential issue with longer-term repercussions is that Israel is now perceived as partisan, that is, pro-Republican Party. Israel is also on the wrong side of US demographics, in other words, the growing coalition of minorities that is more represented by the Democratic Party than by the Republicans. Furthermore, Israel will emerge from this crisis with the image of its relationship with the United States as tarnished in the eyes of the Arab world. The image of a strong alliance was always an important part of Israel’s deterrence vis-a-vis its neighbors.

So while one might hear positive rhetoric about the re-establishment of a good relationship after the congressional debate, there is much room for concern and soul-searching about the future of Israeli-US relations. This crisis demands a fundamental change in Israeli policy vis-a-vis the United States. An immediate change is called for in the prime minister’s relationship with the White House. Israel must recognize the reality of the Iran deal and work with President Obama and his national security team on its ramifications. Close cooperation is necessary for monitoring Iranian compliance with the agreement. In the immediate future, a security assistance package should be agreed upon for the supply of sophisticated defensive arms and systems.

In parallel, the two governments need to coordinate peace policies in the region based on the two-state solution and cooperation with the pragmatic Sunni axis against the fundamentalist terror groups. These elements should lead the United States and Israel to conclude a political-security partnership agreement parallel to the Iranian agreement. The first step in this direction is for the Israeli prime minister to announce that bipartisanship will be the basis for future relations with the United States and release the Jewish lobby from the plague of dual loyalty tests.