Israeli Prime Minister Benjamin Netanyahu is still hoping to squeeze last-minute favors from outgoing US President Donald Trump at the expense of his relationship with the incoming administration. 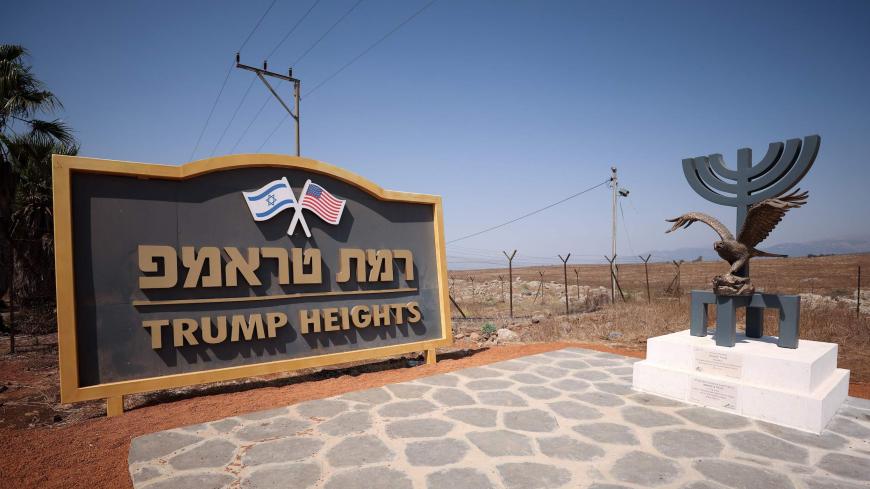 An eagle statue is seen on a Menorah sculpture donated by the Jewish American Society for Historic Preservation dedicated to US President Donald Trump by the entrance to Trump Heights, an Israeli settlement in the Israeli-occupied Golan Heights on Sept. 21, 2020. - EMMANUEL DUNAND/AFP via Getty Images

The Nov. 17 New York Times report that US President Donald Trump considered an attack on Iran’s Natanz nuclear facility prior to his departure from the White House likely did not surprise Prime Minister Benjamin Netanyahu, Defense Minister Benny Gantz or any other top Israeli defense or political figure. Trump is made of different stuff than his predecessor Barack Obama, and Israel enjoys almost total access to his plans and some of his thinking.

Trump has flirted with a military option vis-a-vis Iran throughout his term. Despite his aversion to military involvement and adventurism abroad, the option was always on the table. His approval for the January 2020 assassination of commander Qasem Soleimani in Baghdad gave rise to assessments in Western and Israeli intelligence circles that Trump is highly unpredictable, especially in changing circumstances.

His Nov. 3 defeat by President-elect Joe Biden was just the kind of shakeup analysts have braced for. American-Israeli Hollywood tycoon Haim Saban, a major donor to the Democratic Party and friend of Democratic presidents, was asked this week on Al-Monitor’s “On Israel” podcast why Netanyahu was one of the last major world leaders to congratulate Biden, who he refrained from addressing as president-elect. Saban offered a cutting answer: “Because he’s afraid of Trump.”

The whole answer, of course, is more complicated. Netanyahu is hoping for some last-minute favors before the president leaves Washington relating to Israeli construction in the settlements, tightening relations with Arab Sunni states, additional sanctions on Iran and possibly some form of American military action against Iran’s expanding nuclear infrastructure in violation of its agreement with world powers.

Trump’s reported consultation with his defense aides last week about a possible Iran strike was no whim. Quite a few people have raised this option with him quite recently, describing the threat Iran poses, with its consistent violations of the nuclear agreement and obtention of more fissile material than permitted under the deal.

No one holds out much hope for such an attack, but those pushing the idea seem to believe it is at least worth trying. According to the New York Times, this was not the first time the possibility of an Iran strike has been raised in the waning days of a Republican administration. The newspaper reports that toward the end of the George H. W. Bush administration in 2008, Israel asked the United States for help with Iran, including bunker busting munitions and intelligence, before President Barack Obama came into power.

Indeed, when Obama took office, he reduced cooperation with Israel regarding moves against Iran and its allies. Obama tightened intelligence cooperation, but the days when the CIA and Israel’s Mossad worked shoulder-to-shoulder were a thing of the past. Israel adjusted to the change but waited impatiently for a possible Obama defeat in 2012. Its hopes were dashed.

Trump’s election four years later shifted the pattern entirely. According to the New York Times, under Trump, military cooperation between the two countries is significantly tighter and “the Pentagon has revised its strike plans multiple times. It now has traditional military as well as cyberoptions, and some that combine the two. Some involve direct action by Israel.” Such was reportedly the case in the August assassination in Tehran of al-Qaeda’s second-in-command Abu Mohammed al-Masri, allegedly by Israeli agents at the behest of the Americans.

Netanyahu’s delay in congratulating Biden was thus a calculated move designed to improve prospects that the president would take anti-Iranian measures during his final months in office. Israel has also undertaken other measures in hopes of mobilizing Trump’s support for its policies one last time.

On another front, this week Israel opened bidding for the construction of 1,257 new housing units in the Jewish Jerusalem neighborhood of Givat Hamatos, which lies to the east of the Green Line. The tender is scheduled to close on Jan. 18, two days before Biden takes office. The new neighborhood would surround the Palestinian Jerusalem neighborhood of Beit Safafa, cutting it off from a possible future Palestinian state and precluding division of the city within the framework of a peace deal with the Palestinians. Completion of the tender will create an irreversible and binding government commitment, presenting the Biden administration with a fait accompli.

Netanyahu is playing a dangerous game. He has hardly built in East Jerusalem in recent years despite the pro-settlement administration in Washington. Biden is unlikely to have forgotten that on the day of his 2010 visit to Israel as vice president, Israel announced a major construction project in East Jerusalem. In the storm that ensued, Biden considered cutting the trip short, though the idea was dismissed following urgent discussions in Washington.

Israel’s current moves risk damaging its chances to turn a new page with Biden and the Democratic Party, which Netanyahu and his people have alienated in recent years while cozying up to Republicans. Netanyahu has chosen to focus on gains with his political base at the expense of a sound and sincere relationship with the new US administration.