Disappointed over the defeat of their friend, US President Donald Trump, West Bank settlers worry over the Biden administration. 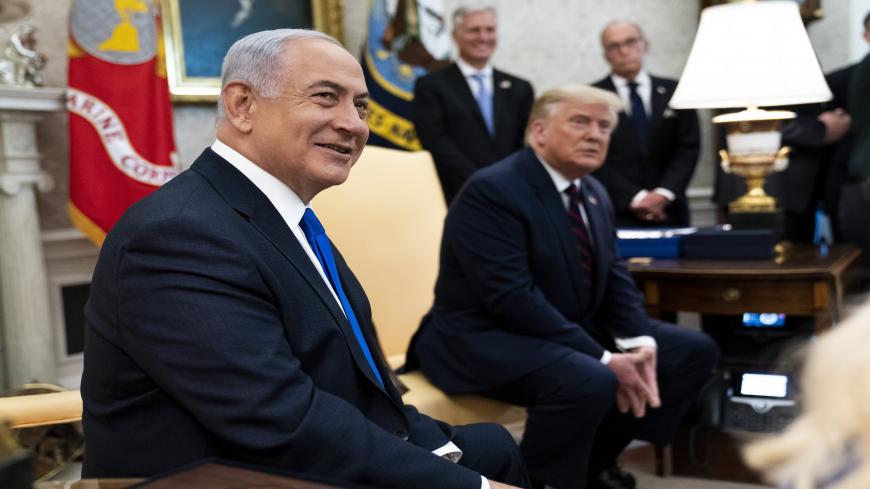 US President Donald Trump and Prime Minister of Israel Benjamin Netanyahu participate in a meeting in the Oval Office of the White House, Washington, Sept. 15, 2020. - Doug Mills/Pool/Getty Images

The day before the US presidential election, several leaders of Israel’s settlement movement held a special prayer service for a Donald Trump win. The place chosen for the event was the Tomb of the Patriarchs in Hebron, traditionally believed to be the burial place of the biblical patriarchs — Abraham, Isaac and Jacob — and one of the holiest sites in all of Judaism.

Any onlookers would have thought that the event was bizarre. It involved a few men in yarmulkes and the requisite coronavirus masks gathered in one of the most contentious sites in the Middle East to pray and blow the shofar against a backdrop of Trump photos and American flags. They were pleading with God for the success of the man they believed had shown more support for Israel than any other US president.

In the next few days it became clear that their prayers had not been answered. The person who they so admired has to leave the White House in 2½ months, and a Democratic Party’s president-elect Joe Biden will move in.

The organizer of the prayer service was Yochai Damari, head of the Mount Hebron Regional Council. Damari now has to get used to the idea that the person occupying the White House for the next four years will be a president who wants to bring Israelis and Palestinians back to the negotiating table. This would mean halting the settlement enterprise in the West Bank, or worse — for the Israeli right — evacuating existing settlements.

“There can be no doubt that in terms of Israel’s settlement interests — not to mention its overall national interests — Trump had some unparalleled achievements. Let’s see who is happy today, and who is less than happy. If Iran is happy, we have something to worry about,” said Damari after Biden was declared the next president.

Damari claims that the real problem is actually Biden’s Vice President-elect, Kamala Harris. “What worries us most is not the president-elect, but the team surrounding him, especially the vice president-elect. It bothers me when I read interviews with Harris saying that she will take steps to bring the Palestinian delegation back to Washington and halt construction in Judea and Samaria [the West Bank]. I have nothing against the president-elect. I don’t think he will be that bad for Israel. But he is an elderly man, and the way it looks now, it will be the people surrounding him who will be running things. That's why I believe that things will be tough, even though we also realize that we have a long way ahead of us.”

Regardless, there can be no doubt that recent developments in the United States mean that the settlers will have many confusing and disconcerting days and months ahead of them. They know Biden well, since he spent eight years serving as President Barack Obama’s vice president. Like Obama, he believes that the two-state solution is the right way to resolve the Palestinian-Israeli conflict. The settlement leaders now believe that sooner or later, Israelis and Palestinians will return to the negotiating table, after years of intense deadlock under Trump.

These changing circumstances are cause for a growing internal rift among the settlement leaders — a rift that began in response to Trump’s “deal of the century.”

Originally, this plan, which was first announced at an official White House ceremony in January 2020, left the impression that Trump would agree to Israeli Prime Minister Benjamin Netanyahu announcing the annexation of the settlements in the West Bank. But the celebrations were premature. There was no annexation, and several members of the Yesha Council, the West Bank settlements’ umbrella organization, launched an aggressive campaign against Netanyahu and Trump. They claimed that the deal of the century effectively recognized the establishment of a Palestinian state. They even attacked Netanyahu openly by accusing him of being personally responsible for the establishment of a Palestinian state.

The most outspoken opponent of the deal was Yesha Council head David Elhayani. He embarrassed Netanyahu by claiming that Trump is no friend of Israel, and that friends would not allow the creation of a terrorist state in Israeli territory. Many members of the Yesha Council expressed reservations about his remarks, resulting in a bitter internal feud for the first time in their group’s history. Never before had members of the council advocated publicly for two conflicting positions. Yet many on the right claimed that Elhayani’s campaign impeded actual annexation.

Even after Biden’s election, Elhayani continued to argue that Trump was bad for the settlement movement. He even praised his defeat. As he put it, Israel did not lose a real friend. “I’m not sure that Biden is any worse for Israel. It is a mistake for Israelis to say that the Democrats are our enemies. It’s good that Trump is gone,” he said.

Elhayani does not represent the majority of the settlement leadership. Inserting himself into this complex situation was none other than Blue and White party Chairman and Defense Minister Benny Gantz. Yesterday, it was reported that the Ministry of Defense was about to legalize 1,700 housing units in settlements across the West Bank. The settlers, led by Elhayani, were quick to congratulate him on the move. They said that this was further proof that West Bank settlements are becoming part of the consensus.

But there were also those who knew deep down that this was not an accurate description of the situation. The settlements are not part of the consensus for the new US administration.

Historically, the Israeli right has regarded all American administrations as being hostile to the settlement enterprise in some way or another. Ever since the first settlements were built in the 1970s, official American policy, regardless of party affiliation, has been to oppose their expansion, and even to call for their evacuation. For decades, the settlers operated under the watchful eye of US administrations and presidents. They were seen as impediments to the peace process. On more than one occasion, construction in Judea and Samaria led to full-blown crises in Israel’s relationship with various US presidents.

Undoubtably, the climax occurred during Obama’s first term. He did everything he could to speed up the establishment of a Palestinian state. In 2009, Netanyahu even succumbed to pressure from Obama and ordered a nine-month freeze on settlement construction. It was a traumatic event for the settlers. In 2010, there was another serious crisis between Jerusalem and Washington, this time after the Netanyahu government announced the construction of 1,600 new housing units in East Jerusalem. Timing is everything. When he made his announcement, then-Vice President Biden was on an official state visit to Israel. Biden was so angry by the news that he almost left the region in a huff. Then Netanyahu apologized, and Biden stayed. Still, the mood remained tense in the ensuing years.

It now seems as if the current squabbling among the settlers’ leadership is a “problem of the rich,” occurring at a time when they are not threatened with “the risk of evacuating settlements.” Trump and his Ambassador David Friedman were actually supportive of the settlements.

“Right now, we are faced with more question marks than exclamation marks. There are concerns and worries,” admitted head of the Efrat Local Council Oded Revivi. “Biden was Obama’s vice president during eight bad years, especially when compared to the four wonderful years under Trump,” he said.