Much to everyone’s surprise, there is growing opposition to Prime Minister Benjamin Netanyahu's annexation plan among the settlers’ leadership. 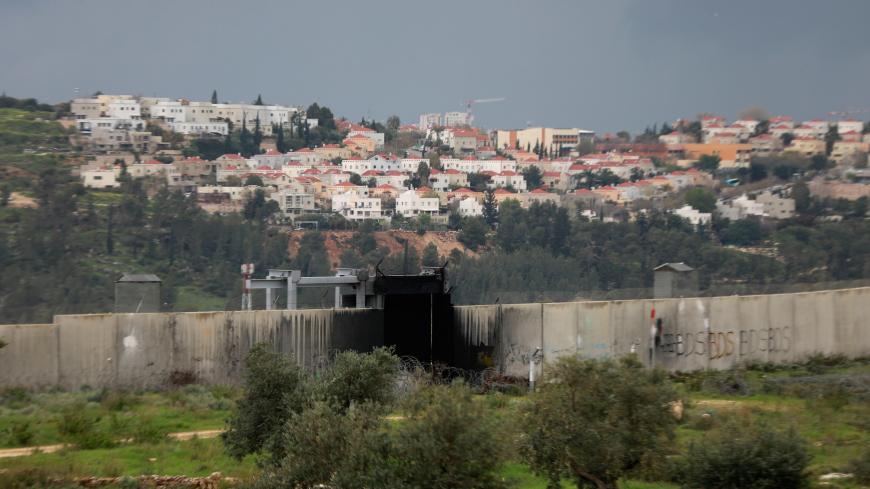 The Jewish settlement of Modiin Illit appears in the background and the Israeli barrier in the foreground in the village of Bilin in the Israeli-occupied West Bank, March 20, 2020. - REUTERS/Mohamad Torokman

Annexation, or the act imposing Israeli sovereignty and law on about one-third of the West Bank [Jewish settlements], would be the ultimate fulfilment of a dream for the settlers and the ideological right. Fifty-three years have passed since the 1967 Six-Day War and the founding of the first settlement — Kfar Etzion — which was reestablished after being destroyed during the 1948 War of Independence.

With an especially friendly American president, Donald Trump, Prime Minister Benjamin Netanyahu has been pushing ahead with his annexation plan. It is expected to be brought before the government for approval July 1, once the precise mapping of the area is completed and after advanced talks with the US administration about all its details. The problem is that during the last few days, there have been some bumps along the road in dealing with the administration. These include differences of opinion regarding the exact mapping of the settlement lands.

One Israeli official involved in the matter says that some members of the American team are imposing conditions that would make it impossible for isolated settlements to continue to exist. Regardless, the plan is likely to be brought before the government for approval this summer, before the United States holds its presidential election.

But much to everyone’s surprise, there is growing opposition to the plan among the settlers’ leadership. While some leaders have encouraged Netanyahu to embrace the plan as a sign of things to come, others have gone so far as to demand that he reject it out of hand. The main reason that these opponents give is that agreement to the proposal in principle would imply Israeli acceptance of an independent Palestinian state in the rest of the West Bank. While some settlers opposed the plan even before this, it is worth remembering how they greeted the plan with singing and dancing when it was first released. In fact, some settler leaders were in Washington for the event.

Among the regional Judea and Samaria council heads spearheading the current wave of opposition are Yochai Damari, a resident of the settlement of Othniel, who heads of the Mount Hebron Regional Council, and Shlomo Ne’eman of Karmei Tzur, who heads the Gush Etzion Regional Council. The particular West Bank settlements in which they live add a personal dimension to their opposition to this annexation plan. The Trump plan in its current iteration would leave them as isolated enclaves completely surrounded by Palestinian territory.

Ne’eman told Al-Monitor that these enclaves are like a frog in the throat, which is impossible to swallow. “It is unacceptable to have Jewish settlements, which are home to Israeli citizens, connected to their country by a narrow strip of road, just 10 meters wide, with a Palestinian state on either side of it,” he said.

Why, then, did they agree to the plan so enthusiastically when it was first released? “We thought that in exchange for annexation, Israel had agreed to negotiate with the Palestinians. However, once we were expected to give our approval in advance to the creation of a Palestinian state, we opposed it unequivocally,” Ne'eman said.

Even if that means forgoing Israeli sovereignty? He said, “Absolutely. We’ve lived like this, under military rule, for the past 50 years. We can continue living that way for another 50. We oppose the creation of a Palestinian state between the Jordan River and the Mediterranean. On the other hand, the plan is a positive step forward in the sense that it dismisses the idea of transferring Jewish or Arab populations in order to achieve peace, and in the sense that it includes Israeli sovereignty.”

He also points out that in exchange for sovereignty, during the negotiations Israel would have to give up on construction outside settlement boundaries until permanent borders are established through negotiations. “A freeze on settlement construction will strangle them,” Ne'eman said. “We won’t be able to build even on the 30% of land that will come under Israeli sovereignty.”

Ne’eman is apprehensive over a report published May 6 by Israel Hayom newspaper. The article summarizes explanations provided to the newspaper by US Ambassador David Friedman, by which the absolute majority of settlers, some 400,000 people, will continue living their lives as always, with construction taking place according to the laws that apply to towns and villages inside Israel. According to Friedman, about 10,000 to 15,000 of settlers won’t be able to expand their communities' area, but will still be able to build upward.

Oded Revivi, the mayor of the settlement town of Efrat south of Jerusalem, takes the opposite position. He compared the current decision to the decision made by Israel’s first prime minister, David Ben-Gurion, in 1947 to accept the United Nations’ partition plan, even though it left the Jewish state with only a small part of the Land of Israel. “The willingness of the Zionist movement to accept partition was a major factor behind international support for the creation of the State of Israel and its recognition by most nations,” Revivi said.

Another important factor is widespread public support for annexation. Revivi added, “Israeli society is ready to offer widespread acceptance to everything we built here. A unity government made up of the Likud, the Labor party and Blue and White wants to impose Israeli sovereignty on Efrat, Beit El, Shilo, Elon Moreh and other settlements. An absolute majority of Knesset members is prepared to vote for that.’’

“Israel needs the United States on its side,” said Revivi. He said he believes it is impossible not to agree to the American plan, which ensures the continued existence of all the existing settlements. According to him, Israel may not have this chance again. He goes on to hint at the possibility that Trump will lose the election and that Joe Biden will become president. Biden has declared his opposition to the Trump plan.

What does he think a full solution will look like? “We would enter into negotiations for four years, after which we could very well decide to create a Palestinian state, but by that we mean a state that isn’t very different from the Palestinian Authority today. In other words, it would be a state with full civilian rights, but it would also be completely demilitarized, and with Israeli control over its border crossings. We could certainly live with that.”

Both sides in this debate are applying pressure on the new batch of ministers, and especially on Netanyahu. Ironically, there may even be cooperation between right-wing factions opposed to annexation and similar factions on the left to prevent the plan from being implemented.