Blue and White leader Benny Gantz must beware of right-wing ministers such as Defense Minister Naftali Bennett trying to establish facts on the ground before the unity government is established. 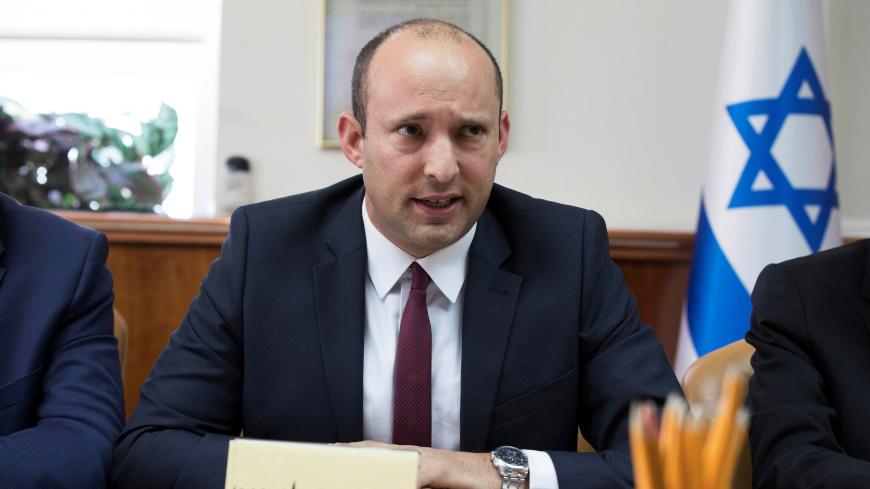 On March 30, the Israel Defense Forces chief of staff, Lt. Gen. Aviv Kochavi, issued a very unusual statement that stressed the absolute need to keep the chain of command in the defense system. This statement almost went unnoticed in these coronavirus days. Still, for those who did notice, it must have raised eyebrows, as they sensed that Kochavi was very angry with his temporary boss, Defense Minister Naftali Bennett, and with good reason. Bennett had assembled an impressive task force to prepare the annexation of many areas in the West Bank without involving the chief of staff in these significant efforts.

Bennett's plan was presented to the public a few years ago. Its essence stems from the perception of Area C (which includes 60% of the West Bank, and from which Israel intended to withdraw gradually, according to the 1993 Oslo Accord and the 1995 Interim Agreement) as an Israeli hinterland, which should be annexed to Israel in its totality. Over the years, Bennett tried several times, unsuccessfully, to push Prime Minister Benjamin Netanyahu's governments to adopt this plan.

In comparison with other diplomatic plans that were published in recent years, President Donald Trump's plan for peace in the Middle East is the closest to the Bennett idea: Only half of area C would be part of the future Palestinian State, which means, by deduction, that the other half could be annexed by Israel.

Bennett didn't like the part about a Palestinian state mentioned in the "deal of the century" but saw the plan as a whole as a very important step forward that would allow Israel to expand its borders. Immediately after the plan's official publication, he put open pressure on Netanyahu to annex area C.

After the March elections, Bennett was surprised to find himself in the position of Israel’s defense minister despite his poor showing in the polls. In fact, Netanyahu made Bennett an offer he could not refuse, as Netanyahu was concerned about rumors that Bennett might join forces with Blue and White leader Benny Gantz. And thus, Netanyahu’s nemesis became his defense minister in an interim government, without the need to get Knesset approval. Sitting in the defense minister’s seat, Bennett began preparing the annexation of all the Israeli settlements and the Jordan Valley. He didn't waste any time, bringing together officers from various departments in the army. These included map drawers, people from the Civil Administration and from the Israeli Coordination of Government Activities in the Territories (COGAT), legal advisers and other specialists. Together they were tasked with preparing Bennett a set of scenarios for annexing the Jordan Valley only, annexing the settlements only, or both.

Bennett believes that having Trump in the White House has provided a unique opportunity for implementing the ideas of the right in Israel, and fears that if Trump is not reelected in November, that opportunity may vanish, never to appear again. Bennett’s idea is to create a kind of a fait accompli by preparing all that is needed for annexations by the new government. He wanted to make sure that Gantz would find it too difficult to defer a final decision or to prevent it. He was working on the assumption that Gantz would not even dream of launching such a preparatory project. Bennett also thought that Kochavi would not confront him on such an issue.

Bennett is hoping to establish facts on the ground while coalition talks are ongoing as means of forcing his political agenda on the future government. I don't know whether Bennett realizes that a such a precedent exists, but such a scenario has already taken place in Israeli politics. In 1984, neither Labor nor the Likud could form a coalition government. In that tie situation, the two leaders, Shimon Peres and Yitzhak Shamir, agreed to form a joint government, with an equal number of ministers on each side, so that after 25 months of Peres as prime minister, Shamir would replace him. During the tough negotiation the two sides encountered several ideological obstacles; one of them being the issue of building new settlements in the occupied territories.

While negotiating the outline of the future coalition, the Labor party demanded that the number of settlements that could be established throughout the term of the government be limited; however, the Likud raised a legal argument against that. The Likud leadership argued that a binding decision had been recently adopted on constructing a series of new settlements. But how could a government not yet established have adopted such a decision? As it turned out, after the elections, during the days of the caretaker interim government, ultra-rightist Science Minister Yuval Ne’eman continued chairing the Ministerial Committee on Settlements. Ne’eman convened his committee, but was the only minister to attend the meeting. And so, Ne’eman voted by himself for a long list of new settlements that had been waiting for a governmental green light. According to the government bylaws at the time, any committee decision uncontested for two weeks by Cabinet ministers was automatically adopted as an official resolution.

However, Ne’eman's resolutions were not laws, and formally, the new government was free to take very different decisions. Still, the settlers pressured Likud representatives to stick to the list of the newly confirmed settlements. Eventually a compromise was found, with six settlements approved to be constructed.

Gantz gave up on many principles and made several concessions on his way to a unity government under Netanyahu: he reneged on his promise not to serve under an indicted politician; he agreed to help form the biggest government ever and he accepted the nominations of unfit personalities. Nevertheless, judging by his past statements, it seems he won’t support any unilateral annexation plan that might hurt or even prevent efforts for peace with the Palestinians. He has said that he would support such a move only if it is backed internationally, which is apparently his way of saying that he won’t back such an initiative now. As for Bennett (whom Gantz might replace), the leader of Blue and White must demand that the interim defense minister immediately dissolve his ambitious task force. Gantz must do his best in order to get back to the negotiating table with the Palestinians, without any unneeded obstacles.