It is not yet clear if and when Prime Minister Benjamin Netanyahu will present his annexation plan, but the army has already been instructed to prepare for escalation scenarios. 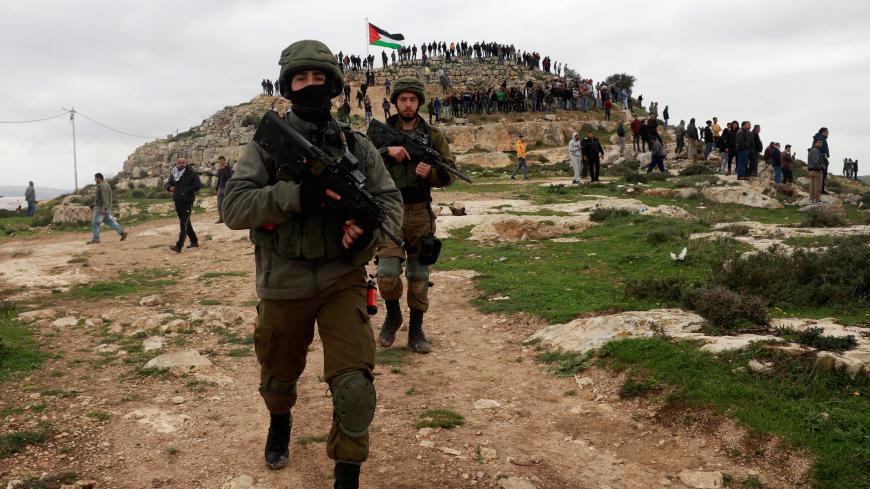 Israeli soldiers walk as Palestinian demonstrators gather on a hilltop during a protest against Israeli settlements in the town of Beita, in the West Bank, March 2, 2020. - REUTERS/Mohamad Torokman

Israel Defense Forces (IDF) Chief of Staff Aviv Kochavi and Shin Bet head Nadav Argaman will convene a meeting June 3 at the Tel Aviv Defense Ministry headquarters to discuss escalation scenarios ahead of possible annexation of West Bank lands. Representatives of IDF central command and intelligence unit, office of the Coordinator of Government Activities in the Territories and different Shin Bet branches are expected to participate. They will be presented with different scenarios, including riots in the West Bank and suspension of diplomatic ties with Jordan.

On June 1, Defense Minister Benny Gantz had instructed Kochavi to step up army preparations for the possibility that Israel advances plans on annexing parts of the West Bank.

Gantz is expected to appoint in the coming days a special representative to coordinate moves on the issue in the Palestinian arena. The Ministry of Defense will also establish a coordinating team in order to gather all the professional recommendations for such a possibility and the different escalation scenarios.

No political decision has been made in Israel yet on the issue. Still, the army has reportedly already started preparing in recent weeks for the possibility of Jordan Valley annexation, including verification of equipment and stocks, tightening coordination between the different security agencies and stepping up training.

Gantz met June 1 with US Ambassador to Israel David Friedman, while Prime Minister Benjamin Netanyahu spoke on the phone with senior US officials, including White House adviser Jared Kushner. Following these contacts, Gantz met with Kochavi and updated him on developments. Gantz reportedly told Kochavi to speed up preparations for “diplomatic steps on the agenda in the Palestinian arena.”

Speaking at a Blue and White faction meeting June 1, Gantz was quoted as saying, “A joint team will be formed that will bring together recommendations — on an operational level — for the efforts that are on the agenda for the West Bank and Gaza Strip.” Gantz also said that any such move would be carried out in “cooperation with states of the region."

The April 20 unity agreement between the Likud and Blue and White parties enables Netanyahu to bring his annexation plan for vote as early as July 1. Upon the publication of US President Donald Trump’s peace plan last January, Gantz called to adopt the outline as a whole, but according to recent signs, Netanyahu intends to bring for vote only implementing Israeli sovereignty over the Jordan Valley and West Bank settlements. Still, in a June 2 meeting with settlers, Netanyahu hinted that the US administration is less enthusiastic than before on annexation. Sources close to the prime minister also said that the joint US-Israel mapping committee might need several more months to conclude its work, a precondition set by Washington before greenlighting annexation.

Gantz, who also carries the title of "alternate prime minister" has not said clearly if he would vote against Netanyahu’s annexation plan, though some Blue and White party seniors have stated in recent days that they will battle the initiative from within the Cabinet.