Israel’s security chiefs are presenting the political echelons all the options and grim scenarios of what could happen if annexation takes place. 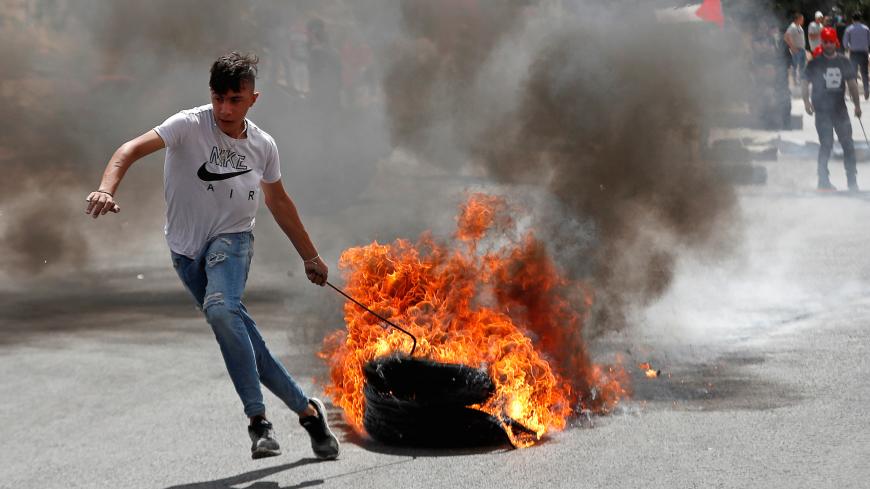 A Palestinian demonstrator pulls burning tires during a protest against Israel's plan to annex parts of the occupied West Bank, near the Jewish settlement of Beit El, near Ramallah, June 19, 2020. - REUTERS/Mohamad Torokman

Just a week away from the July 1 target date for the start of official action on possible Israeli annexation of 30% of the West Bank, Israel’s military and security chiefs have no earthly idea what is going to happen — how, when and if at all. The chief of staff of the Israel Defense Forces (IDF) and the heads of the Shin Bet security agency and of the Mossad are trying to read the minds of the decision-makers, meanwhile preparing for every imaginable scenario. The IDF and Shin Bet have been conducting discussions in recent weeks about the possible annexation and its implications, and have drawn up a precise threat map. The Mossad is conducting a similarly deep assessment. The heads of the security agencies are awaiting a directive from the political echelons. Before that happens, an in-depth discussion is planned to allow the defense and security chiefs to present decision-makers with their views on the annexation move.

The forum for this expected session is yet unclear — whether the Security Cabinet, the mini-security cabinet or the quartet, also known as the “kitchen galley,” consisting of Prime Minister Benjamin Netanyahu and Knesset Speaker Yariv Levin for the Likud and Defense Minister Benny Gantz and Foreign Minister Gabi Ashkenazi for the Blue and White party. The interior minister and leader of the ultra-Orthodox Shas party, Aryeh Deri, one of Israel’s most seasoned and experienced politicians, may be asked to join them. Deri, of all people, whose voters hold distinctly right-wing views, has been tagged over the years as highly pragmatic. If the professionals participating in the crucial session express warnings about the annexation, Deri will be the one who gives them top priority. As a young member of Israel’s Security Cabinet in 1991, Deri helped then-Prime Minister Yitzhak Shamir fend off insistent calls by then-Defense Minister Moshe Arens to mount an aerial strike in western Iraq during the first Gulf war. In hindsight, Shamir and Deri turned out to have been right.

Almost 30 years hence, when Israel’s political echelon asks the professionals for their assessments, it will likely hear serious warnings regarding the repercussions of the annexation move. These will depend, obviously, on the extent of the annexation and the manner in which it is carried out. However, the IDF and Shin Bet will undoubtedly warn that imposing Israeli sovereignty over areas of the West Bank risks setting off Palestinian violence of varying degrees. The Shin Bet has already formulated its opinion, and the decision-makers will not like it. According to its assessment, annexation is highly likely to set off yet another round of violence with the Palestinians. The agency experts believe rogue groups and the Islamic Jihad in Gaza will light the first spark, forcing the ruling Hamas movement to join the fray in response to the unilateral Israeli measure. An exchange of blows between Israel and Gaza could easily stir up violence in the West Bank.

The second intifada broke out in the fall of 2000 in response to a direct order from PLO leader Yasser Arafat encouraging terrorist attacks against Israel. The current Palestinian president, Mahmoud Abbas, will not be issuing such instructions. The level of energy on the Palestinian street is also not reminiscent of the situation 20 years ago. The reasonably prosperous economy in the West Bank serves as a significant inhibiting factor against violence. The great unknown is what the Tanzim, the armed wing of the PLO’s Fatah movement, might do if Israel carries out annexation. Israel is closely monitoring Tanzim activity and hoping that the armed Palestinian militia does not set off a third intifada, as it did the first one in 1987. In recent months, during the coronavirus crisis, several clashes occurred between the Tanzim and Palestinian security forces in the West Bank. Could this tension fuel an explosion in response to an Israeli move? The prospects of that happening are not low.

The IDF has not yet presented a final, comprehensive position regarding the annexation. Nonetheless, the assessment by the IDF chief, Lt. Gen. Aviv Kochavi, is unlikely to diverge significantly from that of the Shin Bet’s Nadav Argaman. The IDF, too, believes unilateral Israeli annexation might ignite a conflagration, although the top brass is likely to emphasize that the defense forces are prepared to respond effectively to any eventuality.

The upcoming deliberations between the political and military-security echelons will also include in-depth assessments of regional implications. It is safe to say that every security official in the room will warn of some sort of Palestinian response. The options will be ranked according to severity: A local spat with Gaza, a tough reaction by Gaza and local reaction in the West Bank, a harsh response by Gaza that will in turn prompt a harsh response in the West Bank, leading to a third intifada and possibly to violence on other fronts, as well.

The discussion will also deal with the repercussions of an all-out clash with the Palestinians in other arenas. It is no secret that Israel’s security agencies have been expending most of their energy in recent years on the country’s northern front: The growing Hezbollah arsenals, the Iranian entrenchment in Syria, the Iranian-backed precision-missile project and first and foremost Iran’s continued nuclear aspirations. Under the Iran nuclear deal, to which Iran is still a signatory, the land of the ayatollahs will soon be allowed to renew its conventional weapons armament. The United States has already announced it would not let this happen and would impose a strict, renewed weapons embargo on Iran. In parallel, Israel continues to monitor with concern Iran’s increasing uranium enrichment. It is unclear whether Israel still has a significant military option with which to counter various scenarios of a nuclear Iran.

The same is true for Israel’s options vis-a-vis Syria and Lebanon. Here too, Israel might have fewer reaction possibilities than it had in past years. In fact, Israel might be forced to make a decision, as Hezbollah keeps getting stronger. The group might soon begin eroding Israel’s strategic advantage and cross the red line. Decision-makers have already debated how much longer Israel can sit by and watch Hezbollah’s weaponization, especially its growing arsenal of rockets and precision missiles.

Decision-makers will now have to set aside all such decisions in light of the annexation issue. A third intifada would force Israel to shift priorities, to focus on trying to put out fires in the Palestinian arena, and abandon the northern arenas at this critical time. Netanyahu and Gantz will also have to weigh this consideration — and we have not even mentioned the chaos in the US administration regarding a green light for annexation and the growing objections to the annexation on the part of US and Israeli allies in the Gulf States.