Are Netanyahu and Gantz really so different? 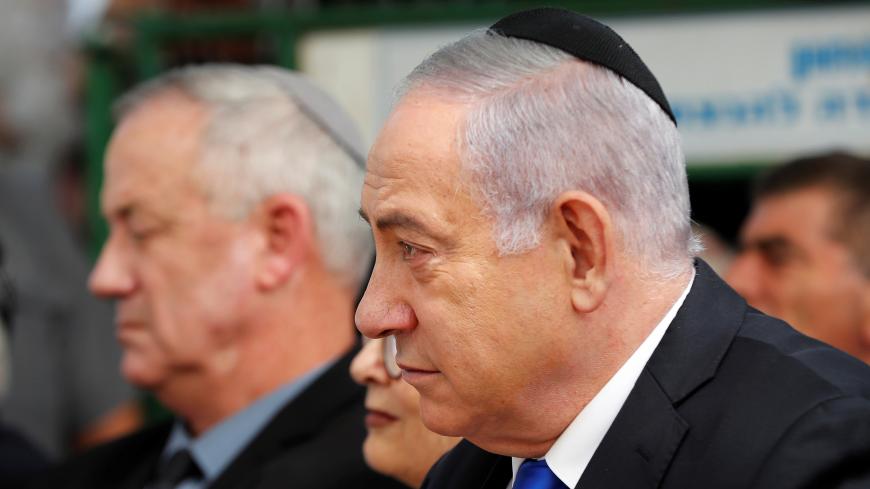 It would prove to be a difficult task to find essential differences between the leaders of the two largest parties in Israel, Prime Minister Benjamin Netanyahu of Likud and Blue and White Chairman Benny Gantz. This is due in part to Netanyahu adopting policies that are at times dramatically different from his pronouncements, especially some of those preceding elections, while Gantz, being new to politics, hardly has a record outside the military with which to compare. In campaigning, Gantz has used general and noncommittal language, and the statements he has made have to be treated as campaign promises.

Netanyahu and Gantz are not so far apart in their views in several areas, one example being that the Golan Heights remain under Israeli sovereignty. There are, however, some differences in the positions the two leaders have presented and in Blue and White's platform and Likud’s stated policies.

On the question of a Palestinian state

In the outgoing right-wing government, Netanyahu’s line was that there’s “no partner for peace” on the Palestinian side, and he almost severed contact with the Palestinian Authority (PA), except on ongoing security and economic issues. He holds the view of economy first, which is also the basis of President Donald Trump’s long-anticipated “deal of the century,” and follows this approach on the ground. Paradoxically, during Netanyah's tenure, the standard of living for Palestinian residents of the West Bank rose in contrast to the economic situation of the PA itself. After Trump’s election, Netanyahu became more extreme and renewed construction in the settlements, and during the campaign for the Sept. 17 elections, he promised to extend Israeli sovereignty to the Jordan Valley and settlements on the West Bank. He further promised that unlike in the past, Israel would not be vacating any settlements. As far as anyone knows, Trump’s peace plan runs along these lines, and if Netanyahu forms the next government, he’s likely to endorse it.

Gantz supports an immediate start to negotiations with the Palestinians to find a diplomatic solution. That is, for him, there is a partner. He agrees with Netanyahu’s approach that the “pragmatic” Arab nations — Jordan, Egypt and the Gulf states — should also be partners in the process. A thorough search finds no statements by Gantz on Trump's plan, but he has expressed significant support for the involvement of Arab states in any future arrangement, which is apparently one of the plan’s key components.

Gantz, Israel Defense Forces chief of staff during Operation Protective Edge (2014), supports escalating Israel's military response, including the use of targeted assassinations, after the firing of rockets from Gaza into Israel. He believes that after a military operation brings quiet, it is then possible to discuss a strategic solution for Gaza together with other countries in the region. In sum, Gantz believes in taking an active approach toward a solution to the situation with Gaza.

Netanyahu speaks of an aggressive stance toward Gaza but does almost the opposite, adopting an approach of managing the conflict rather than resolving it. In recent years, he has acted with surprising moderation, allowed funding from Qatar into Gaza and responded in a subdued manner to several serious bouts of sustained rocket fire. On the other hand, in the recent election campaign he promised that a real operation against Hamas in Gaza might soon be in the cards, and according to various reports, he almost launched an operation before the election.

It would be hard to find real differences between the parties when it comes to socioeconomic matters. Here too Netanyahu has a dual approach. Although an avowed fan of economic neoliberalism, Netanyahu allowed Finance Minister Moshe Kahlon to implement populist measures, including increasing the deficit. In this regard, he permitted an increase in benefit allowances for the poor despite criticism that it would suppress motivation to work. In another pre-election twist, he signed an agreement with the libertarian Moshe Feiglin for Zehut to withdraw from the race and run on the same ticket with Likud and promised Feiglin the next government would have a free economic approach.

Gantz had suggested increasing government intervention in such areas as education, health and infrastructure, but in the party platform, based on that of Yesh Atid's, which supports a liberal economy, principles like making the public sector more efficient, increasing productivity and encouraging competition are mentioned. It may be possible to explain the internal contradiction in that the party is an “unholy” mixture that includes the neoliberal Lapid as well as Avi Nisenkorn, chairman of the Histadrut Labor Federation and supporter of social democratic positions.

In the April and September election campaigns, Netanyahu sunk to another low in his statements about Arab citizens of Israel and the Joint List, which represents most of them. Among other things, he accused the Arabs of election fraud, and one of his Facebook posts said that the “Arabs want to annihilate us all.” On the other hand, the most recent Netanyahu government invested more in the Arab sector than any previous government.

During the September campaign, Gantz opened a dialogue with the Joint List and its leader, Ayman Odeh. He promised, among other things, continued government investment to close gaps in the Arab sector. He also, however, spoke of forming an exclusively Zionist governing coalition, that is, without the Joint List, and his party includes avowed right-wingers like former Defense Minister Moshe Ya’alon, who would not abide close cooperation with non-Zionist parties. Despite this, three of the four Joint List factions announced support for Gantz as its candidate for forming a government.

One of Blue and White’s main themes is the fight against government corruption. Its leaders have attacked Netanyahu for the allegations of corruption against him, especially the submarine affair. Gantz promises to pass a law to limit prime ministerial terms to two and to increase government transparency. Gantz conducted himself with relative propriety throughout the campaign and refrained from attacking Netanyahu too sharply, in contrast to others in the opposition.

Netanyahu is suspected of bribery, fraud and breach of trust, and he may ultimately be charged. In his defense is the presumption of innocence, but on the other hand, his political associates have sought to amend laws, including the immunity law, to allow him to escape justice. He has conducted the two elections this year in a divisive manner, accusing Arab Israelis and his rivals in general of disloyalty. It’s possible that in doing so, he drove away some who had previously supported him.

In short, there are essential differences between Gantz and Netanyahu, but they are not particularly significant. In tone, socio-political conduct and expression, the gaps are huge.