Israeli elections: Where is the economy?

Contrary to previous election campaigns, which focused on the dire economic situation, the main themes of the current campaign are the scandals surrounding Prime Minister Benjamin Netanyahu and questions about Blue and White head Benny Gantz’s personality. 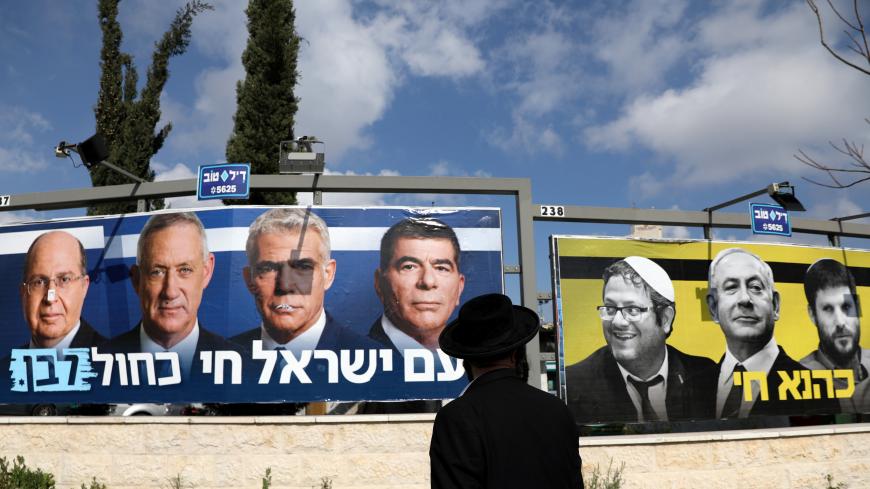 After two elections (2013 and 2015) in which economic issues were a central feature of the various parties’ campaigns, the current April 2019 election makes very little mention of economics. This time, the topics on the public agenda are completely different and include the various scandals involving Prime Minister Benjamin Netanyahu, the ability of Blue and White head Benny Gantz to lead the country, and more recently, the conflict with Hamas in Gaza.

The 2013 election took place with the socioeconomic protests — which erupted in Israel just a year and a half earlier (the social justice demonstrations of summer 2011) — still looming in the background. This brought issues like housing and the cost of living to the forefront. Yair Lapid, then a popular television host, decided to ride the wave and created a party called Yesh Atid, much like his father Tommy Lapid, who headed the centrist Shinui party from 1999 to 2006. The younger Lapid’s election slogan was “Where’s the money?” He ended up winning 19 seats, an excellent outcome for a new party, and was appointed finance minister.

The economy was once again a major issue in the 2015 election. This, time, however, the person to benefit most from it was Moshe Kahlon, a former minister, who left the Likud to form his own party, Kulanu. His party’s only message was socioeconomic. It won him 10 seats, an achievement that earned him the position of finance minister for the past four and a half years.

In contrast, the economy is not a major issue in the current election. In fact, almost anyone identified with socioeconomic issues suffers in the polls. So, for instance, Kahlon’s party has dropped in the polls and is now hovering on the electoral threshold. In response to a question by Al-Monitor, Kahlon explained that his electoral strength suffered as a result of the struggle between the two major parties (Likud and Blue and White). He tried to win back those lost votes by announcing a plan to provide free education starting at the age of 1 and another program to help the elderly, but so far none of this has had any real success in boosting his standing.

Lapid and his party also failed to rise in this election’s early polls, winning just 14 seats and less. That was one of the reasons he decided to join forces with Benny Gantz to create the Blue and White party.

As Netanyahu’s only serious rival for the office of prime minister, Gantz built his party without any major economic figures. Only recently did he bring in Avi Nissenkorn, chairman of the Histadrut, Israel’s largest labor union. Yet even then, the move was interpreted as resulting more from a desire to get the help of the Histadrut and the workers’ committee organizational infrastructure than as part of some economic policy. From an economic perspective, Gantz was subjected to harsh criticism for this move. Nissenkorn is identified with the bullying tactics of the market’s big monopolies, including the Israel Railways, the Airport Authority, the Electric Company, the Israel Ports Authority, etc. (the labor unions of these companies are considered especially strong in Israel). Furthermore, Nissenkorn’s social democratic economic views are completely different from the liberal capitalist positions of Lapid and his people. The impossible connection between these two groups making up the Blue and White party shows that Gantz is not prioritizing the economy. Gantz speaks very little about the economy in his speeches; when he does bring up economic issues, it is generally in response to important questions like "Will you raise taxes?" In those cases, he tends to make do with generic responses and offers promises without any economic basis. A report by the financial newspaper Calcalist showed that some of Gantz’ socioeconomic promises merely reflected his hopes; other promises were not feasible and could not be implemented in the Israeli market.

As little as the Likud does focus on the economy, it will raise the fact that the economy is doing relatively well. There has been a reduction in the poverty gap according to the inequality index, and there has been a sharp rise in the average wage. Dry economic data does show that Israel is facing some economic problems, as Akiva Eldar suggested here in an Al-Monitor article describing severe transportation problems and overcrowded hospitals. Still, the average Israeli saw a rise in the standard of living over the last 10 years (2009-2019) when Prime Minister Benjamin Netanyahu ruled, along with a decline in inequality and social gaps, significant increase of the average salary and relatively low unemployment compared to other countries in the West. Netanyahu was in power for all those years.

Netanyahu and the Likud have been concealing Kahlon and Lapid’s long-term involvement in these achievements while blaming them for economic failings such as the high deficit and succumbing to workers’ unions. “Lapid said, ‘I don’t know anything about economics,’ and he was right. He really was a failure as finance minister,” Netanyahu said disparagingly on Feb. 21, adding, “perhaps the biggest failure in the country’s history.” He also lashed out at his main rival, saying, “What is Gantz’s economic record? He had one foray into the private sector, and he caused his firm to collapse.” In fact, Netanyahu has been ignoring his own responsibility of nominating first Lapid and then Kahlon to the position of finance minister. Netanyahu’s political reason for the nomination of both was the same: appointing political rivals to positions that are traditionally unpopular in the public. In general, neither the people nor the other elements in the market like the finance minister. He is the one who always cuts budgets and orders new taxes. And indeed, both Lapid and Kahlon suffered on the electorate level from this position.

One of the most prominent parties in the current election that is running exclusively on a socioeconomic platform is the Gesher party of Orly Levy-Abekasis, who hopes to be appointed minister of health. She was very popular in the polls at the start of this election, though most polls now predict that she will not pass the electoral threshold despite widespread support for her personally and for her economic positions.

Another party whose economic positions are actually helping it gain traction is Moshe Feiglin’s Zehut party. Feiglin is a far right politician whose platform supports rejecting the Oslo Accord, retaking all the Palestinian occupied territories, granting civil but not political rights to “loyal” Palestinians and encouraging “disloyal” Palestinians to emigrate. But Feiglin is becoming the surprise of the current election, with recent polls giving him as many as seven seats — some of them from left-wing bastions in the Greater Tel Aviv region. In a conversation with Al-Monitor, Feiglin explained that his voters, most of whom are young, may not align with the right on diplomatic issues, but they love the ideas surrounding personal freedom that appear in his platform — chief among them libertarian economic policies and a radically free economy. So, for instance, he advocates privatization of the education and health systems, the repeal of taxes on cars, the elimination of different income tax levels and revoking government stipends to the unemployed, disabled, etc.

In the 2019 election, the Netanyahu investigations and questions surrounding Gantz’s personality have pushed aside much more important issues like the economy and Israeli society. The candidates are rarely asked about them, meaning that voters will cast their ballot knowing very little about the economic platforms of the major parties.