Former militant right-wing ideologue Moshe Feiglin has reinvented himself and with support from both the right and the left, could hold the key to Israel's upcoming coalition negotiations. 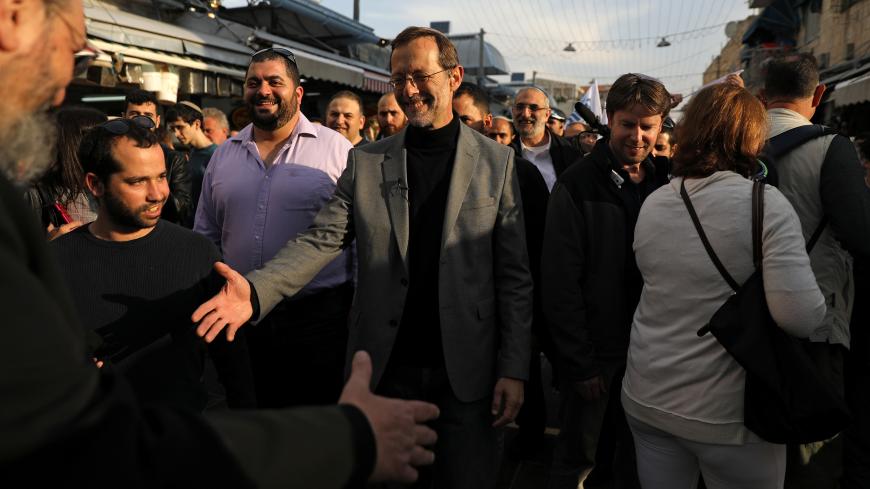 Moshe Feiglin, the leader of the Zehut Party, greets people as he campaigns ahead of elections at the Mahane Yehuda market in Jerusalem, April 4, 2019. - Reuters/Ammar Awad

In the run-up to the 2009 election, Prime Minister Benjamin Netanyahu presented a poll to the Likud showing that the party stood to lose four seats if it included Moshe Feiglin in its Knesset list. Feiglin chaired the Likud’s far-right “Jewish Leadership” faction, made up mostly of settlers. It was the most extreme faction in the party at a time when Netanyahu wanted to shift toward the center, and he was concerned that Feiglin would harm the party’s image. His effort succeeded. Using a series of procedural moves, he was able to push Feiglin to an unrealistic 36th place on the list. But that was not all: Netanyahu also warned Likud Knesset members that anyone who participated in Feiglin’s events would not be a given a ministry in his next government.

Feiglin has long since parted ways with the Likud. In 2015, he founded the Zehut Party, which now looks likely to play a decisive role in the coming election. Polls predict the party winning five to as many as seven seats. While most of its supporters are religious Jews on the right, the current assessment is that it will get one and a half seats from the center-left. Feiglin of all people has managed to shatter the traditional divide between left and right and blur the differences between them.

His past as a militant right-wing ideologue, convicted in the 1990s of unlawful assembly and sedition as a result of his activities to impede the Oslo Accords, has been erased from the public memory. He has managed to reposition himself from religious settler to refreshing new voice. He is now seen as a free-market liberal who supports the separation of religion and state and overturning the old order, and his winning card is his support for the legalization of marijuana. It’s all working like a charm.

At an April 2 gathering of party activists at Hangar 11 in the Tel Aviv port, Feiglin drew some 2,000 supporters, many of them young. They included people who had previously voted for Meretz, Labor, Yesh Atid, Kulanu, the Likud and HaBayit HaYehudi. At the gathering, Feiglin announced that he is not committed to supporting any party in the coalition negotiations and that he is not in anyone’s pocket. This means that Feiglin could be the deciding factor in determining the next prime minister. The president will task the person with the best chances of composing a majority coalition and establishing the next government. Should the battle between the Likud and the Blue and White Party prove as close as the polls indicate, Feiglin will be a power broker, as he is committed to neither. Both parties have been sending out feelers to him over the past few days. Still, since Feiglin started out in the far right, he's likely to pick Netanyahu in the end.

If the polls are right, Netanyahu’s fate will be in Feiglin’s hands in just a few more days. It would be a sweet triumph over Netanyahu, who waged a bitter war to destroy him in the Likud and eventually hounded him out of the party.

Feiglin has announced that he must be given the Finance Ministry as a condition for him joining any government. On March 28, he reported to his supporters that as far as he is concerned, he has already achieved that goal. “The dream is starting to be fulfilled. Based on the rising number of seats that all the polls show us winning, with God’s help, we are going to do it. We will get the Ministry of Finance, and with God’s help, the Ministry of Education too.”

Feiglin made these remarks in a video shot in a Tel Aviv restaurant and posted to Facebook, one of the regular updates that have become his trademark on social media. Netanyahu and Blue and White leader Benny Gantz will do everything they can to form the next government. If Feiglin does win five to seven seats, he will hold the balance of power and inevitably become a minister in the next government — though maybe not finance minister.

Anyone who knows Feiglin from his previous foray into politics is dumbfounded. He has even changed the way he dresses: A black golf shirt has replaced his tailored jacket and button-down, making him look like a Tel Aviv intellectual.

His statements about building the Third Temple (once the vision of the “Jewish Leadership” faction) and his negative remarks about the GLBTQ community have been replaced by talk of the free market and liberalism, all packaged in a charismatic New Age rhetoric that rejects the old order.

What Feiglin is promising his voters is nothing less than a revolution. In the video he filmed at the restaurant, he says, “If Zehut gets the Finance Ministry, all our lives will change for the better. It will impact the cost of living and the suffocating sense that the state is strangling small business owners and the little man. There are a quite few things that can be done at once … to liberate the market. It’s going to happen. And the people who feel it happening most are the commissars of consciousness, the very people who control public awareness.”

Who are these commissars that Feiglin is talking about? All the old politicians. Feiglin is right about one thing. By the time they noticed him it was too late, and now he threatens them, particularly New Right leaders Naftali Bennett and Ayelet Shaked. According to polls, they have lost as many as three potential seats to Feiglin. Netanyahu himself was quick to hop on board the marijuana legalization train. At an April 2 political gathering, he announced that the Likud would also advance the legalization of cannabis.

Assuming that Feiglin does pass the voter threshold, Zehut will have at least three other Knesset members apart from him. It is a fascinating and unusual list. The second-place slot is reserved for former Shas Knesset member Rabbi Haim Amsalem. Amsalem is considered a unifying force who is popular among secular Jews. He opposes the Chief Rabbinate’s monopoly on religion and wants to ease the conversion process. The third place slot is held by economist Gilad Alper, a chief analyst at a major investment house known for his liberal economic views who wrote much of Zehut’s economic platform. In fourth place is Ronit Dror, a social worker who focuses on male victims of sexual assault and who supports the equitable distribution of alimony among men and women.

In the Zehut platform, Feiglin talks about libertarian economics, the separation of religion and state, the elimination of numerous government offices including the state-run educational system, lowering taxes and eliminating public welfare policies. It is easy to see why young people are drawn to him, but they are not the only ones. Over the last few weeks, older supporters have been drawn to Zehut, seeing a vote for Feiglin as a way of expressing their disgust with current politics. With its innovations, boldness and success in the polls, Zehut is in many ways a post-social protest party. It is facing off against parties like Moshe Kahlon’s Kulanu and Orly Levy-Abekasis’s Gesher, but also against powerful social protest brands like Knesset members Itzik Shmuli and Stav Shaffir of the Labor Party. In the era of Zehut, they all look like part of the old world order.