Netanyahu back to free market principles?

Prime Minister Benjamin Netanyahu might favor returning to a free market economy, as advocated by his new political partner Moshe Feiglin, but his ultra-Orthodox allies are bound to object that. 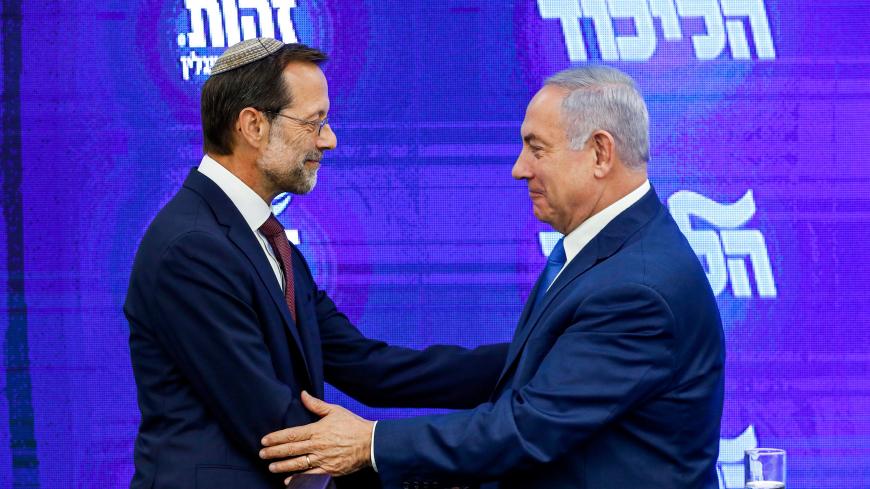 “I feel like this is the first time I’ve really spoken with Moshe Feiglin. We both support a free market and individual liberty.” That was how Prime Minister Benjamin Netanyahu began his press conference with Feiglin Aug. 29, where the two men announced that an agreement had been signed between the Likud and Feiglin’s Zehut party. The main principles of the agreement included Zehut withdrawing from the current Knesset election on Sept. 17. Feiglin would then support the Likud and be appointed minister, responsible for some unspecified economic or social portfolio, when the next government is formed. Furthermore, the new government would agree to advance certain economic issues and the legalization of medical marijuana.

And so, Netanyahu’s pressing political needs created a new economic partnership, leaving the two of them to gallop off into the sunset, or so it would seem. The problem is that there are quite a few treacherous obstacles along the way, as personified by Netanyahu’s other coalition partners, who do not embrace Feiglin’s economic theories.

Feiglin was a member of the Likud from 2000 to 2015. He ran twice for the party’s top leadership position and was elected to the Knesset once (2013). Before the 2015 election, Feiglin received an unrealistic slot on the Likud’s Knesset list, so he quit the party and formed Zehut.

This new party had a far-right platform, which included the repeal of the Oslo Accord; the reoccupation and annexation of all territories currently under the Palestinian Authority, including the Gaza Strip; the expulsion of any Palestinians opposed to this; and the granting of “resident” status to Palestinians who openly declare loyalty to the State of Israel. According to Feiglin, this loyalty oath would guarantee these residents civil rights, including the right to own property, but it would not give them the right to vote for the Knesset. The platform was equally clear about matters pertaining to religion and state. Feiglin envisions all state institutions operating according to Jewish law, and the Temple Mount placed under the auspices of the Chief Rabbinate.

The Zehut party platform is more in line with some of the more extreme ideas of the Rightward party than it is to the Likud. That's why no mention was made of these issues in the agreement signed between Netanyahu and Feiglin, which focuses mainly on economic issues. Nevertheless, if Feiglin is, in fact, appointed to a ministerial position, he will be able to advance other political issues and matters pertaining to religion and state in cooperation with the ultra-Orthodox and nationalist ultra-Orthodox parties. What this means is that if a right-wing government is formed with the participation of Feiglin and Zehut, it will be even more extreme than the current government.

From a socio-economic perspective, the Zehut party platform is chock full of libertarian and free market ideas. It calls for the privatization of education and health care, canceling and ultimately erasing the biometric database, and the right to bear arms for almost any citizen.

With this, the party is flirting with avid supporters of a liberal worldview in Israel, as long as they are prepared to ignore the diplomatic and religious clauses of the party’s platform. In the last April election, it seemed as if the support of marijuana users would get Feiglin into the Knesset. But despite all the optimistic polls, Feiglin failed to pass the electoral threshold. This time around, new polls released just before Zehut joined forces with the Likud showed that the party would fail to pass the threshold again. That was what led Feiglin to enter into an agreement with Netanyahu, who is doing what he can to prevent the right from losing votes.

At their joint press conference, Feiglin stressed the economic agreements he had reached with Netanyahu, saying that it was big news for the private market. It would help small businesses in Israel and lower the cost of living. The problem is that the free market Netanyahu, who once advocated for budgetary constraint, has largely disappeared over the last few years. As finance minister in the early years of the last decade (2003-2005), Netanyahu took drastic measures such as cutting social security payments and various other reforms, and with them was able to reduce unemployment. He veered away from this approach, which matches Feiglin’s own economic ideas, once he became prime minister.

One reason for this was his coalition partnerships. The ultra-Orthodox parties always had their own socio-economic agenda. For example, they demanded that the last government increase its budget for their yeshivas and they got what they wanted. Economists believe that the main factor preventing ultra-Orthodox men from integrating into the workforce is the policies of the current Netanyahu government. It canceled incentives to join the workforce, which were enacted during Netanyahu’s third government by then-Finance Minister Yair Lapid, and restored government subsidies and scholarships for yeshiva students.

The ultra-Orthodox parties now hold several important economic positions in Netanyahu’s coalition. If another right-wing, ultra-Orthodox government is formed, they will undoubtedly continue to hold those positions. The chairman of the Knesset Finance Committee is Knesset member Moshe Gafni of Yahadut HaTorah, and the deputy finance minister is Knesset member Yitzhak Cohen of Shas. Cohen is especially supportive of certain key parts of the social-democratic economic program of Labor-Gesher party Chairman Amir Peretz.

In a conversation with Al-Monitor, Cohen said that Peretz has the right social principles, and that Shas would be happy for Peretz to join the next government, so that he can help Shas in the struggle against those people who support the capitalist economic policies advocated by Netanyahu.

At a Sept. 2 meeting of the Manufacturers Association of Israel, Gafni declared that grants and other aid to Israeli factories should be increased, and that imports should be reduced. This is the exact opposite of the economic policies that Feiglin advocates, which include open markets, the removal of tariffs and minimal government intervention in business and industry.

Yet even within the Likud, there is opposition to some of the party’s current liberal economic policies. Finance Minister Moshe Kahlon is considered to be a “social-oriented” finance minister, who introduced such things as a housing project called “Price per Resident,” which subsidized the purchase of apartments by billions of shekels. Kahlon, who returned to the Likud together with his Kulanu party, also sees himself as the main candidate for finance minister in the next government. Should he receive the post, he is expected to have serious ministerial clashes with future minister Feiglin, who, according to the agreement, is slated to receive some economic or social post.

The bottom line will be left to the prime minister. Experience shows that Netanyahu usually prefers a political solution to problems such as these, meaning that he will choose the option that keeps his government intact. This leaves Feiglin at a clear disadvantage, compared to Netanyahu’s ultra-Orthodox partners.

One more thing worth noting: The agreement with Feiglin depends on Netanyahu forming the next government. Given how the polls are showing a breakdown of power in the ruling coalition, this will not be easy to accomplish at all.